China can use Russia to build a new international order 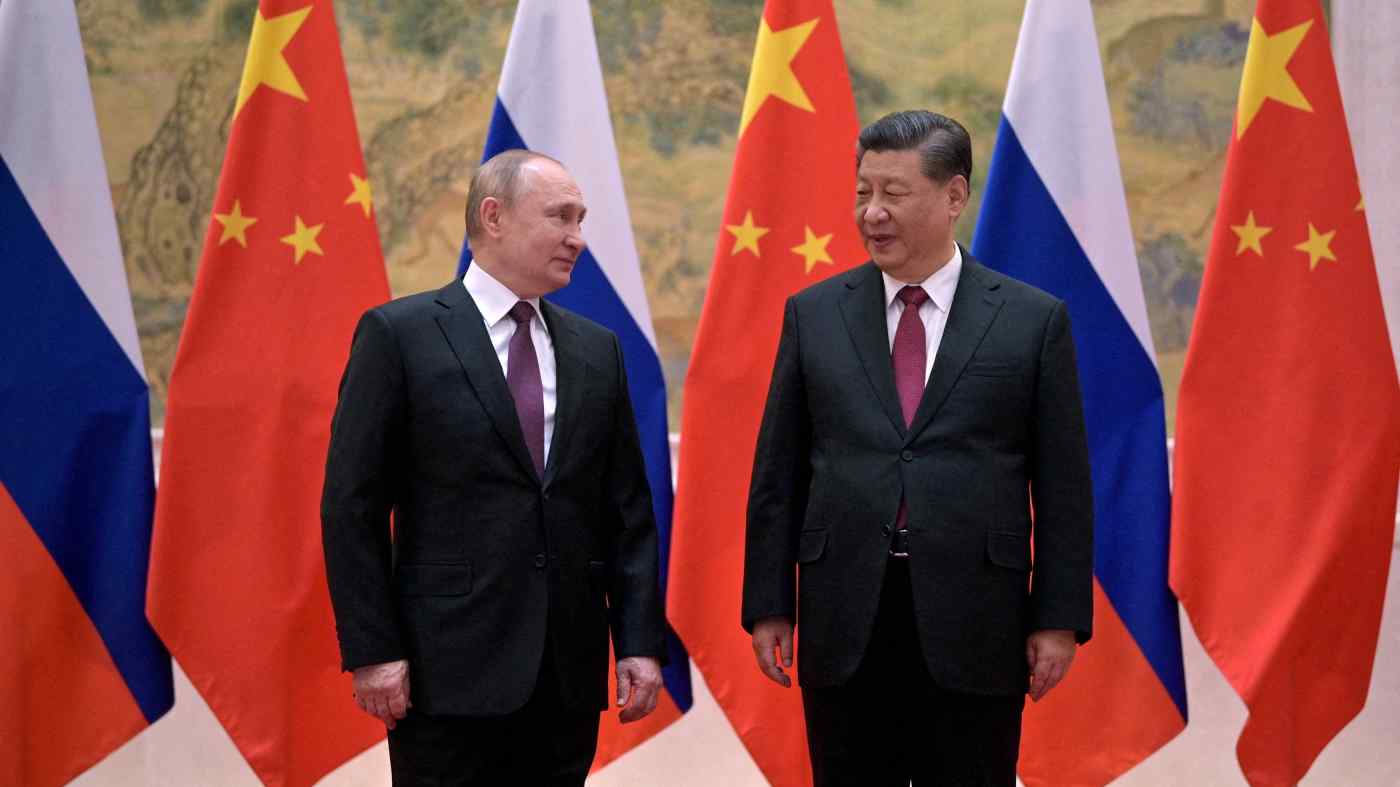 Vladimir Putin attends a meeting with Xi Jinping in Beijing on Feb. 4: Xi was setting the context for how his priorities can form the heart of the relationship. (Handout photo from Kremlin Press Office)   © Reuters
CopyCopied

Alessio Patalano is professor of war and strategy in East Asia at King's College London and senior fellow at Policy Exchange.

Russia's Ukraine invasion is the most severe military crisis in Europe since the end of the Cold War, something akin to a European 9/11 in terms of the sharp awakening it has delivered regarding the role of hard power in contemporary statecraft.

How Putin's war will affect Europe's relations with Russia remains difficult to predict. A clearer picture is emerging as to the future of Moscow's ties with Beijing.

China is likely to consolidate its role as the senior partner in a relationship that the joint statement of Feb. 4 confirmed is being driven by a fundamental dissatisfaction with the existing international order.

The joint statement was, first of all, a manifesto about a perceived dystopian worldview. It emphasized how Russia and China seek "genuine" democracy, multipolarity, regional cooperation and economic interdependence with the United Nations and its Security Council playing a central and coordinating role.

The document's worldview promoted the "democratic stability" of authoritarian regimes and warned against the spurious character of open societies that protect individual liberties. It was a worldview in which the leadership of the United States fundamentally challenged the ability of Russia and China to thrive as global powers.

Yet Xi Jinping was not merely pursuing an unqualified ideological alignment with Vladimir Putin. He was setting the context for how his priorities can form the heart of the relationship. He demonstrated that by accepting the need to create a rapport superior to the alliances of the Cold War era, where Russia-Chinese cooperation now has no forbidden areas.

Xi expressed sympathy for Russia's proposal to create security guarantees surrounding Europe and supported Putin's opposition to NATO's enlargement. In exchange, Xi received Russian reaffirmation of the One China principle and opposition to any form of independence for Taiwan, as well as Moscow's commitment to practical cooperation in the Arctic and Central Asia. On the eve of Putin's most hazardous gamble yet, China was ensuring a framework with 'no limits' for Xi's long-term ambitions.

Indeed, with Moscow's economic dependency on Beijing becoming clearer at this meeting with Putin, Xi showed that he would have the decisive vote in how and where such limits would be set.

Alongside the joint statement, Putin unveiled a new deal on oil and gas worth an estimated $115.5 billion. Russia, already China's third-largest gas supplier, will thus be able to keep increasing exports to China over the next quarter of a century. Further, Russian oil giant Rosneft and China National Petroleum Corp., or CNPC, extended an existing deal to supply 100 million tones of oil over the next 10 years. The logo of UnionPay at a Japanese restaurant in Moscow on Mar. 10.   © Sipa/AP

This change matters because no matter how the Ukraine war progresses, Putin is in the twilight of his reign while Xi Jinping is not. Xi's plans for the rejuvenation of the Chinese nation have, if anything, entered a new and sharper competitive phase.

While Chinese authorities have accepted that their economy will grow at a slower 5.5% rate per year, they have also decided that defense spending needs to continue to rise, with a declared 7.7% of gross domestic product dedicated to the creation of a world-class military by 2035.

Strict guidance to economic development, the cultivation of more innovation ecosystems, a laser-sharp focus on promoting an alternative to the dollar as an international currency, these factors, as much as the promotion of civil-military fusion in which technologies and information systems reward state control over civil liberties, are all strong indicators that Beijing will stand by its joint statement with Russia.

While it will be hard for China to maintain support for Russia's war in Ukraine, Xi's relationship with Moscow will prove instrumental to his wider political commitment of building a country that is whole, rejuvenated and standing proud in the international arena by 2049, the 100-year anniversary of the founding of the People's Republic of China. In the context of such an authoritarian ascent, competition with the United States is likely to exacerbate.

The Biden administration is seemingly clear on this point, with the announcement of its Indo-Pacific strategy just as tensions in Eastern Europe reached a breaking point. A weakened Russia operating in Beijing's shadow can still play a considerable role in blunting the existing international order and facilitating the consolidation of a Chinese alternative. In such strategic cooperation, Moscow will also help bolster Beijing's interests in the Russian Far East, the Arctic, the South China Sea and the Middle East.

Observers have sought to assess whether China was 'duped' into supporting Russia as a way to explore the depth of the relationship. Such an approach is helpful to delineate the utilitarian contours of Russo-Chinese ties, but it underestimates their broader strategic significance. The relationship emerging from the ashes of war in Europe will be an opportunity to challenge the order that the United States stands for in Asia.

In this regard, there is ample evidence to suggest that China was aware of Russia's intentions regarding Ukraine, not least when Putin pledged not to commence military operations in Ukraine until after the Winter Games had finished.

For Xi Jinping, it would appear, Putin's war was never an optimal development that he could hope to control. Yet, he can use it to plant the seeds that will spur Russia's growth as a long-term strategic partner that could help him fulfill his geostrategic ambitions in the war's aftermath.