Beijing's early advantages in supply, speed and demand are slipping A worker unloads a box of Sinovac Biotech's vaccines from a Chinese military aircraft at Villamor Air Base in Pasay, Metro Manila, on Feb. 28: China's greatest advantage in vaccine diplomacy is its speed.   © Reuters
CopyCopied

At a glance, Beijing is winning at early vaccine diplomacy, as far as projecting soft power and expanding international influence is concerned. China has sent 114 million doses overseas and is out-pledging India, Russia and wealthy democracies in bilateral donations.

In a boost for Beijing, two Chinese vaccines also are poised to receive emergency use authorization from the World Health Organization this month. Meanwhile, growing concerns over the efficacy and safety of AstraZeneca's vaccine, the primary vaccine distributed by the COVID-19 Vaccines Global Access (COVAX) Facility, a global initiative aimed at equitable access to COVID-19 vaccines backed by the World Health Organization, and surging domestic cases in India appear to have hurt one of China's leading vaccine competitors.

Despite these seemingly favorable conditions, China's ability to follow through on its commitments and reap the longer-term benefits of vaccine diplomacy are far from guaranteed. In the world of global vaccine politics, China's success hinges on three conditions: supply, speed and demand. Unfortunately for Beijing, its early advantage is slipping in all three.

Beijing recently committed to vaccinating 40% of China's population, or 560 million people, by June. To achieve this goal, China must do more than incentivize shots. It must produce roughly 1.12 billion vaccine doses and administer them at a rate of 11.5 million doses per day. Yet, at its current production capacity, China simply cannot meet that goal. Sinovac Biotech and China National Pharmaceutical Group, known as Sinopharm, can produce just 5 million doses per day. Vaccine shortages have already been reported in at least five Chinese provinces.

Meanwhile, from Turkey to Brazil, delivery delays and shortages of Chinese vaccines have hamstrung inoculation campaigns. While these delays may be frustrating to those waiting for shots, they raise larger concerns about whether China has overpromised to advance its foreign policy objectives.

Beijing is keenly aware of this capacity gap and is striving to ramp up production. Sinovac is increasing its annual capacity to 2 billion doses, and Sinopharm is aiming to produce 1.1 billion doses per year. While these efforts are crucial to ensure the long-term stable supply of Chinese vaccines, production ramp-up takes time and does not alleviate immediate shortages.

China's manufacturing capacity is almost certain to fall short in the next two or three months, forcing the selective allocation of scarce doses or a shift in the vaccine administration strategy. If the problem persists, China will not be able to hit its vaccination targets by the end of June, when the U.S. is expected to achieve herd immunity. 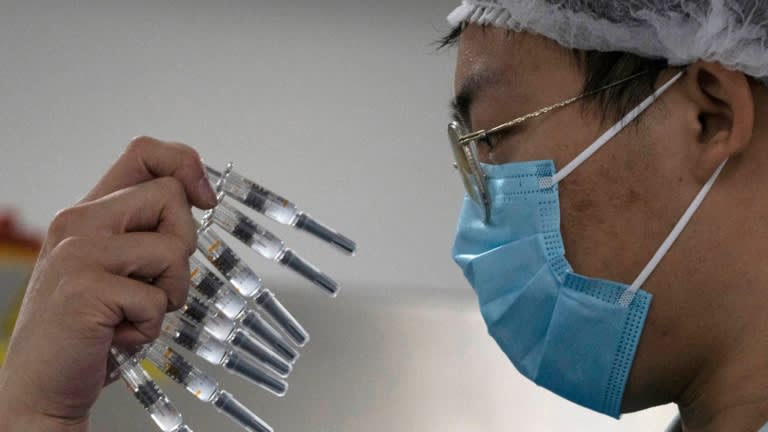 A worker inspects syringes of a vaccine for COVID-19 produced by Sinovac at its factory in Beijing: China's manufacturing capacity is almost certain to fall short in the next two or three months.   © AP

As domestic vaccine rollout consumes most, if not all, of China's vaccine supply, Beijing will have to scale back its vaccine diplomacy in the coming months, either by delaying deliveries, holding off on additional contracts and donations, or both.

While such vaccine delays may be temporary, they could also prove devastating for China's longer-term vaccine diplomacy as Western countries, particularly the U.S., transition from vaccine consumers to suppliers.

China's greatest advantage in vaccine diplomacy has been its speed. By providing early vaccine doses, Beijing can reap soft-power benefits at a time when recipient countries do not have access to Western vaccines. Moreover, China's quick action means it is competing not against highly efficacious American vaccines, but against Russian and Indian ones, which either lack WHO authorization or have comparable efficacy rates.

But as the U.S. rapidly approaches vaccine saturation, meaning any American who wants a shot can get one, it has intensified efforts to boost global manufacturing and ramp up assistance efforts abroad. All three U.S.-produced vaccines, from Johnson & Johnson, Moderna and Pfizer, have received WHO approval with the latter two proving particularly resilient against new variants.

The U.S. also has purchased millions of doses of AstraZeneca's vaccine and other vaccines that it may never use but could potentially lend or donate to countries in need. For countries that have not rolled out Chinese vaccines, increased availability of Western options may dissuade them from procuring Chinese shots in large numbers or at all.

Global preference for Western vaccines may become even stronger as doubts over the effectiveness of China's vaccines grow. For example, China reported a 79% efficacy rate for Sinopharm's vaccine, but an interim study in Peru recorded only a 33% efficacy rate.

Indeed, despite the widespread rollout of Chinese vaccines in Chile and the UAE, cases are either rising or have stagnated. For countries suffering from new waves of deadlier or more transmissible variants, these doubts may be enough to push countries away from Chinese doses, further diluting Beijing's vaccine diplomacy gains.

Despite China's early lead in vaccine diplomacy, growing signs point to a narrower race ahead. Though China's capacity constraints may ease by the second half of the year, by that time, China may not find the same takers, and it may not wield the same influence as it does now.