China expands influence in Africa as US plays catch-up

Beijing is combining military, economic and diplomatic efforts to boost its reach

As China continues to implement its trillion-dollar Belt and Road infrastructure initiative, a principal focus will be engagement in Africa. China knows that Africa's youthful population is exploding, that the continent is rich in natural resources and that it is massive in geographical scale.

It represents a huge potential market for Chinese goods and a zone of significant political influence in countering the U.S. globally. But while China is alive to all these possibilities, and indeed is actively exploring them, the U.S. has only just started to play catch-up and faces losing out to its superpower rival.

Economically, Africa continues to expand in raw output, technological sophistication and growth, which may hit 4% in 2020. While some of the larger economies can drag down overall expansion, countries like Ethiopia, Rwanda and Kenya are showing strong growth.

Specific examples point to the success of China's strategic approach. Just over a year ago, Senegal signed up to the BRI, becoming the first nation in West Africa to do so while welcoming Chinese President Xi Jinping in an elaborate ceremony.

Other nations around the huge and oil-rich Gulf of Guinea are likewise in conversations with China to join the BRI, and Senegal has been working with China to bring African heads of state together with Chinese counterparts in 2021 at the Forum on China-Africa Cooperation.

Ethiopia is another example. With the second largest population in Africa and a newly minted peace agreement with neighbor Eritrea, Ethiopia is poised for significant economic growth this decade. China has been involved in a variety of high-profile construction projects in Addis Ababa, for example light rail and the African Union headquarters. The Ethiopians see themselves as crucial to Chinese economic and political inroads in East Africa. The light rail transit in Addis Ababa constructed by china, pictured in March 2016: China has been involved in a variety of high-profile construction projects in the capital city.   © Corbis/Getty Images

A final example is Angola, which has received enormous loans for government construction projects and supplies a high level of oil to China.

Depending on the trajectory of the coronavirus, there may be an impact on China’s ability to execute much of this as staffing and resources are choked off -- at least temporarily.

China's military is likewise involved with counterparts across the continent. The People's Liberation Army has significant training and exercise programs in more than a dozen countries, with an emphasis on both counterterrorism and humanitarian operations. They have modeled their Africa program of military-to-military engagement on U.S. practice in Latin America and the Caribbean, where they are also deeply engaged.

The Chinese are also willing to make arms sales much easier than the U.S. tends to do, both in terms of favorable prices and willingness to provide key technologies. Chinese warships from the rapidly expanding People's Liberation Army's Navy are paying port calls along the coast of East Africa, to South Africa and to the Gulf of Guinea.

There are certainly a variety of downsides to the Chinese approach from the perspective of African nations. They are looking warily at a series of debt trap entanglements that can end up with a Chinese takeover of infrastructure if loans are not paid off -- as happened in Sri Lanka recently.

The overhang of Chinese intellectual property theft and espionage, and suspicion about the role of Chinese vendor Huawei Technologies in the rollout of fifth-generation, or 5G, wireless networks, are subjects of debate on the continent as they are globally. And China has typically limited its use of local labor and talent at the midlevel and above in its projects. But despite these downsides, BRI is gaining speed throughout Africa.

The U.S., on the other hand, is just beginning to wake up to the enormous potential of Africa. This week Secretary of State Mike Pompeo has toured Ethiopia, Senegal and Angola. It was his first trip to sub-Saharan Africa in his two years as Secretary of State, and the short visit was sandwiched between stops in Europe and the Middle East.

Over the past decade, U.S. interest in Africa has largely been confined to security operations against terrorist organizations such as al-Shabab in East Africa and Boko Haram in West Africa.

But recent budget realignment by the Defense Department has signaled a possible reduction in troops and such partnership operations.

Unlike China, which has a finely crafted strategy for Africa and is moving swiftly to execute it, U.S. efforts are relatively small and not well aligned between military, economic and diplomatic. The U.S.'s profile in Africa is not helped by a perception that President Donald Trump does not care for the region -- recall his "shithole countries" categorization of African nations. 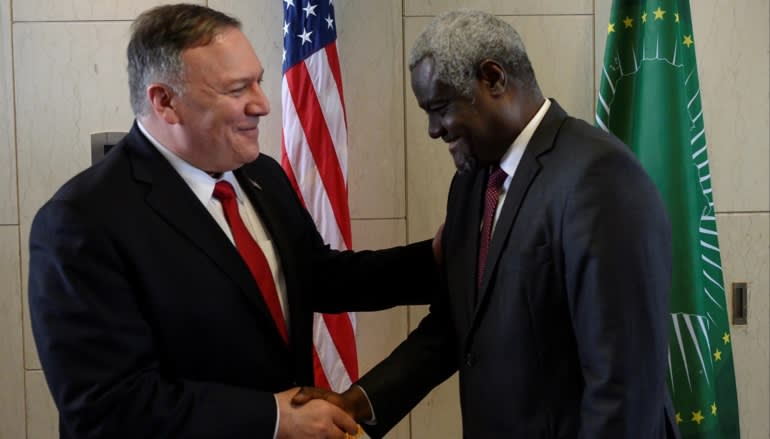 While Secretary Pompeo's trip is at least an opening, it cannot substitute for a better constructed set of strategic initiatives.

China is not altruistic in its actions -- for example, it has been accused of spying on the very African Union headquarters it built. But it has moved well ahead of the U.S. throughout the continent, and -- despite temporary internal distractions and the impact of dealing with the coronavirus -- is likely to continue leading the way as the two powers compete.

James Stavridis, a retired four-star U.S. Navy admiral, is an operating executive of the Carlyle Group. After leading the NATO alliance as supreme allied commander from 2009 to 2013, he spent five years as dean of the Fletcher School of Law and Diplomacy at Tufts University. His latest book is "Sailing True North: Ten Admirals and the Voyage of Character."