China is rewriting coronavirus history and nobody will stop it

"Were it not for the unique institutional advantages of the Chinese system, the world might be battling a devastating pandemic." So boasted a supposedly prophetic editorial in the state-owned China Daily newspaper on February 20, when most COVID-19 cases were contained within China.

It does not look so prophetic now: there are more cases outside of China than inside it and the World Health Organization has declared a global pandemic. At least the daily new confirmed cases of the coronavirus in China have dropped from the thousands to zero on some days last week.

As the crisis of COVID-19 has shifted from being a China problem to a global one, Chinese authorities have switched gears. From the early days of a defensive cover-up and censorship, they have surged into an all-out propaganda offensive.

The message lauds the strength and resolve of China's party-state and deflects scrutiny of the systemic failures and cruel incompetence of the Chinese Communist Party's initial response to COVID-19. The rest of the world, struggling with the outbreak, is allowing this message to go unchallenged.

At the outset, Beijing was focused on the domestic audience: the party-state's vocal defense of its efforts to contain the virus was aimed at countering popular scrutiny at home. The narrative simultaneously blamed the local governments in Hubei province for its governance failures while touting the central government's efforts to salvage the crisis.

The propaganda machine in China is known for its ability to rewrite history within the country, through a combination of censorship and repression, and the ensuing days and weeks have seen this success replicated overseas.

Now China's message for the world is threefold: it has bought the world time to prepare for the pandemic; the virus may not in fact have originated in China; and China will help people who have been failed by their governments.

On some level, Chinese doctors and other front line heroes did buy the world time -- time that has been squandered in many countries. But the world might not have found itself in this position if not for the initial cover-up of the outbreak. That most countries are deep in the crisis as China emerges from it makes this view resonate all the more. 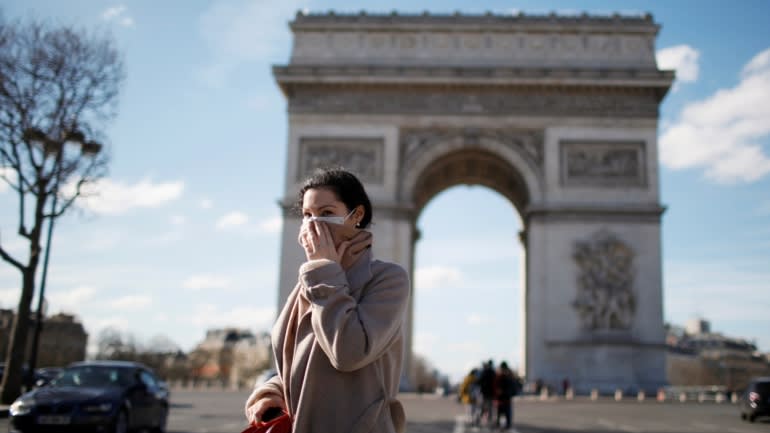 A woman wearing a protective mask walks near Arc de Triomphe in Paris on Mar. 15: the world might not have found itself in this position if not for the initial cover-up of the outbreak.   © Reuters

The rise of the conspiracy theory that the COVID-19 did not emerge from Wuhan has been amplified through official messaging. A Foreign Ministry spokesperson from China tweeted on March 12: "When did patient zero begin in US? How many people are infected? What are the names of the hospitals? It might be US army who brought the epidemic to Wuhan."

If you type "was the new coronavirus" into China's largest search engine, Baidu, the first suggestion is now "made by the Americans?" A number of China's ambassadors have since doubled down on the theory.

This propaganda push may be retaliation for some prominent Americans giving airtime to the conspiracy theory that the novel coronavirus was weaponized by Chinese scientists. But any additional uncertainty or confusion also helps to deflect blame for the crisis away from the China's party-state.

Finally, China is seizing on the absence of clear and credible information from authorities that people can trust. This is only helped by the many failures of foreign governments to properly prepare for the onslaught of the virus and the genuine contribution that China is now well-placed to make. Xi Jinping in Wuhan appears in the CCTV state media broadcast at a shopping center in Beijing: China is seizing on the absence of clear and credible information from authorities that people can trust.   © Reuters

China has sent teams to Iran and Italy, and is planning for Spain, gestures that have been well-publicized. Serbia's President is appealing for help from his "friend and brother" Xi Jinping after the EU, which does not include Serbia, restricted exports of medical equipment. Pacific Island officials are receiving tele-briefings from China on how to manage this crisis.

Contrast China's behavior to that of the competing superpower, the U.S., which blindsided its security ally Germany in attempting to purchase exclusive access to a possible coronavirus vaccine.

China can present itself as a benevolent and responsible world power, stepping up to the plate. This accords with the ambitions of China's leaders to demonstrate that China's system is more effective than that of the West. Xi Jinping's long-standing emphasis on governance reform seeks to show that authoritarian states, like China under him, can coexist and compete in an effective way with established democracies.

But China's approach has also evolved into a global push, and most countries are in no position to argue. The shortcomings of others in preparing for this public health crisis have made it almost too easy for China to pivot.

Buried in our own crises that we should have seen coming, China's leaders are rewriting history so that they are not held responsible for the world's fatalities, disruption and inevitable economic recession.

By buying this propaganda line, we are effectively erasing the many missteps and governance failures at the outset of this crisis and the thousands of documented and likely undocumented deaths of victims in China, many of whom were front line health care workers. But the story of China's victory in the "people's war" against COVID-19 has already been written.

Natasha Kassam is a research fellow at the Lowy Institute in Sydney and a former Australian diplomat.