China is the dragon that will consume Asia's economic future 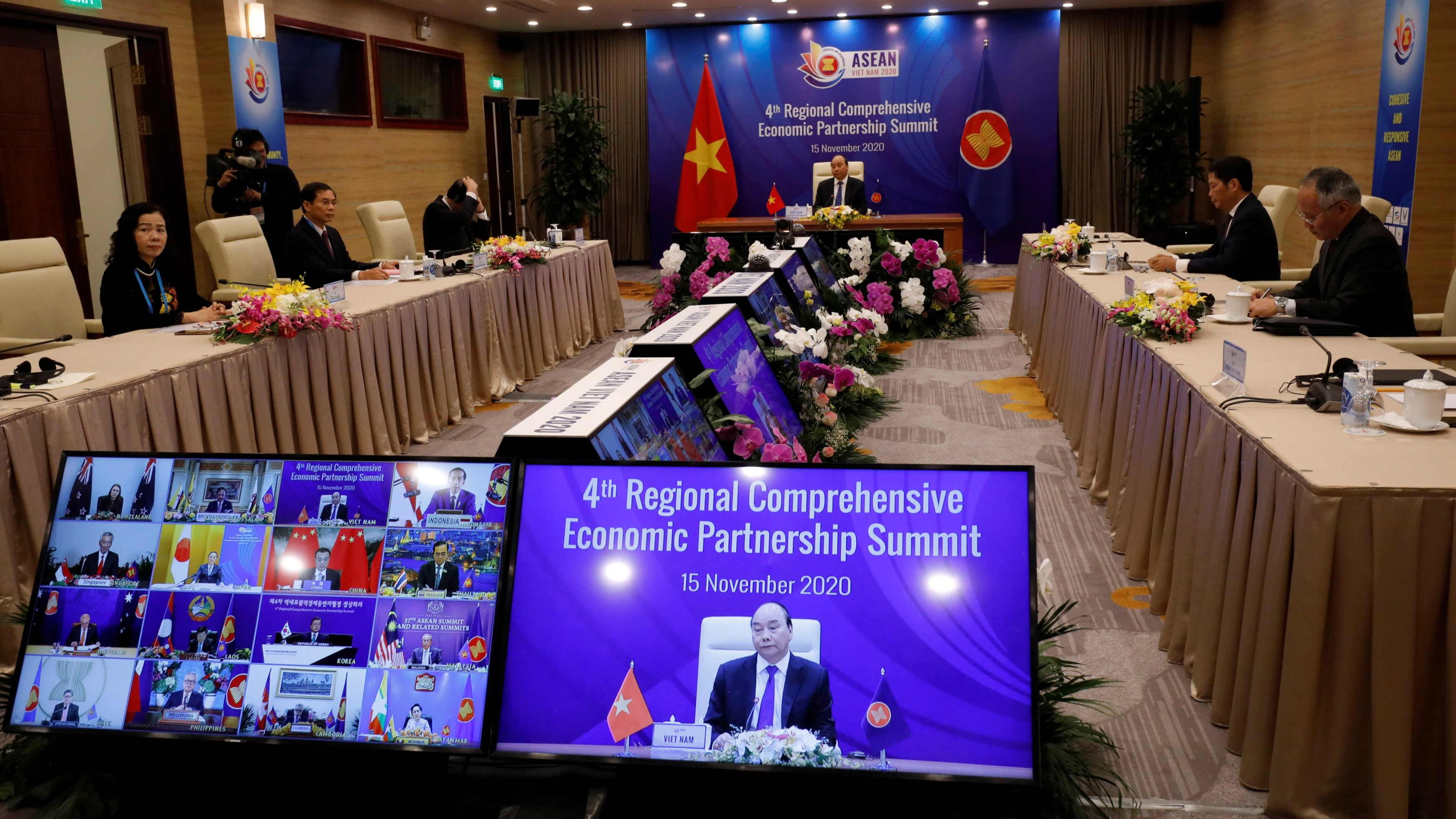 William Bratton is author of "China's Rise, Asia's Decline" which will be published later this year by Marshall Cavendish.

The signing of the Regional Comprehensive Economic Partnership, or RCEP, has been accompanied by the usual excited commentary about how it will increase trade flows and boost the region's economic growth. But these banal platitudes overlook the long-term consequences of free trade -- and the reality that it creates winners and losers.

In the case of the RCEP, the benefits will flow primarily to China at the expense of the other participants. This process will entrench the country's status as Asia's economic core, with all the longer-term benefits that brings. Economically speaking, the rest of Asia has sat down to dine with a dragon that will start to consume its future. Policymakers from around the region need to think about how to deal with this -- and fast.

A little context is required here. First, within the boundaries of any defined economic system, facilitating trade does provide net benefits -- and these are often substantial. Indeed, the promise of increased trade flows and higher incomes is of course always one of the main attractions of a free trade agreement, or FTA. And with several Asian countries having demonstrated the success of export-orientated growth models, it is no surprise that many policymakers across the region look to greater trade as a mechanism to drive economic development.

Second, the precedent set by Asia's earlier FTAs does, to some extent, justify the optimism about the RCEP. Total merchandise trade between China and the 10-member Association of Southeast Asian Nations, for example, has grown by an average of 11% annually since the ASEAN-China FTA and its large-scale tariff reductions in early 2010. Similarly, the China-New Zealand FTA in 2008 resulted in total merchandise trade between the two countries expanding by 13% each year through to 2019. Both these growth rates were much faster than the overall expansion of global trade over the same periods.

But simply focusing on the aggregate trade gains from such agreements overlooks their longer-term geographical consequences, especially as the benefits derived from FTAs cannot be distributed equally between or even within countries. In fact, free trade accelerates the geographic concentration of economic activities. It entrenches a hierarchical relationship between an economic system's core -- which, for Asia, is China -- and its periphery. And it risks locking-in existing industrial structures across countries, limiting their ability to rise up the value chain.

These negative consequences spring from the same root as the economic benefits. The positive gains created by free trade come primarily from the efficiency savings driven by centralizing and scaling-up production in the most competitive locations. This leads to lower per-unit costs and product innovation for consumers, and improved returns on capital for producers.

But when scale becomes the main competitive differentiator, the benefits of free trade are likely to be more evenly shared if the participants are of comparable sizes, at similar stages of economic development, and have complementary industrial strengths. By contrast, countries that have no internationally-competitive industries, or which are at a significant scale disadvantage to their FTA partners, may struggle to secure substantial long-term gains.

The risk for such countries is that either their subscale manufacturing activities are uncompetitive against lower-cost imports, or that they simply cannot develop the domestic industries necessary to accelerate and sustain economic growth over the long-term. Both of these factors increase the risk that Asia's industrial activity will become even more concentrated in China, reinforce the region's existing economic and industrial hierarchies, and relegate its smaller developing countries to perpetual lower-tier peripheral status.

Asia's economic geography is rapidly evolving. China has established itself as the region's economic core and will enjoy all the self-reinforcing benefits of scale that this status brings. Its market size, available resources and economic complexity all underpin the country's supercharged industrial competitiveness relative to its regional neighbors. Yangshan Port in Hangzhou Bay south of Shanghai, which is part of the world's largest container terminal, pictured in May 2020: China will enjoy all the self-reinforcing benefits of scale.   © Imaginechina/AP

Those who believe that China's increasing wage costs will result in the relocation of manufacturing activities to its lower-cost neighbors fail to acknowledge the benefits that scale provides to the core of an economic system, especially in terms of relative productivity. In Europe, for example, Germany may have some of the region's highest labor costs, but this has not stopped its share of total European manufacturing output increasing from 27% to 30% over the last decade.

This is why the unbridled enthusiasm of China's neighbors, especially the ASEAN countries, to facilitate greater free trade with the economic superpower is a puzzle. China's scale versus its neighbors is so disproportionate and its sectoral leadership so pronounced, that it is unclear how Southeast Asia's already limited number of internationally competitive industries will be able to grow or even survive. For all the discussion about manufacturing relocating into Southeast Asia, the reality is that the region's deficit in manufactured goods with China has ballooned in recent years: from $37 billion in 2009 to $139 billion in 2019.

From this perspective, it is easy to understand India's decision to opt-out of the RCEP, given its ambition to grow its own manufacturing and industrial base as part of its economic development strategy. Countries that joined the RCEP, on the other hand, risk becoming perennial lower-tier economies, stranded on the periphery of China's core, with all the associated economic and political challenges.

They may very well find that the RCEP is not quite the positive vehicle for longer-term growth they had expected. Indeed, they may discover that the dragon they sat down to dine with is so big that it eats all the food.