Xi Jinping speaks after reviewing the Navy fleet in the South China Sea in April 2018: leadership demands more than brute might.   © Xinhua/AP
CopyCopied

President Xi Jinping, seeking to press China's advantage while its neighbors are distracted by the coronavirus pandemic, has lately opened multiple fronts in his campaign to make China the world's foremost power -- from Hong Kong and Taiwan to the South and East China Seas to the Himalayan frontier.

The globally paralyzing pandemic has reinforced Xi's efforts to realize his "Chinese dream" by the 2049 centenary of communist rule. Xi said in a speech at Xi'an Jiaotong University in April that "great steps in history have always emerged from the crucible of major disasters."

This may explain why China has sought to make the most of the pandemic. From breaking Beijing's binding commitment to Hong Kong's autonomy and attempting to police the waters off the Japanese-controlled Senkaku Islands to picking a nasty border fight with India by encroaching on its territory, Xi has pushed the boundaries.

His actions are helping to shift attention from China's culpability in the global spread of COVID-19 to the threat his authoritarian regime poses to international security. But his expansive vision has also increased the risks of China succumbing to what the historian Paul Kennedy called "imperial overstretch," or overextending itself abroad, leading to its decline and fall, like how the Soviet empire imploded.

Xi's expansionism has sought to remake globalization on China's terms. The overreach is best illustrated by his marquee project, the Belt and Road Initiative, which aims to refashion the global economic and political order by plowing hundreds of billions of dollars into overseas projects when China has still to fully overcome poverty and underdevelopment at home.

It is an imperial project seeking to lure nations desperate for infrastructure investments into China's strategic orbit. But instead of the "common prosperity" Xi promised, the BRI has been ensnaring vulnerable countries in sovereignty-eroding debt traps. The pandemic's mounting economic toll makes it harder for partner countries to repay their loans.

Beijing's refusal to grant debt relief to partner states facing bankruptcy is only highlighting its predatory lending practices. By engendering anger or resentment, the hard-line approach risks undermining China's international image and inviting a pushback against its neocolonial policies.

More ominously, Xi's aggressive quest for Chinese dominance has led him to open multiple political or military fronts at the same time. This has raised concern at home about China overextending itself and international alarm over the country's trajectory. According to U.S. Secretary of State Mike Pompeo, the world is seeing "continually more aggressive action" by China.

Under Xi, China's relationship with the superpower that aided its economic rise, the U.S., has given way to hostility, with a cold war on the horizon. With India, Xi seems itching to start the world's next big conflict. The link between China and India, which make up more than a third of humanity and over a fifth of the global economy, is critical to international relations.

Meanwhile, Xi's regime has stepped up efforts to turn internationally shared river-water resources into a political weapon by building cascades of large dams in China's borderlands. China's frenzied upstream damming of the Mekong River, however, is causing recurrent droughts in Thailand, Laos, Cambodia and Vietnam. 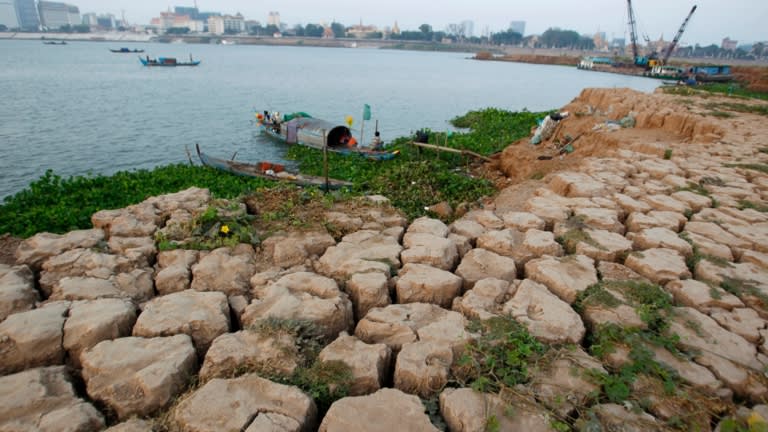 Dried river bank of Mekong near Phnom Penh, pictured in March 2016: tens of millions of people are affected by the low level of the rice bowl-sustaining river system.   © AP

While Mao Zedong destroyed the old order and Deng Xiaoping laid the foundations of a modern Chinese economy, Xi is determined to make China the central player in international relations. Xi's ambition, coupled with the cult of personality around him, may be blinding him to the dangers of an approach that has stretched China's resources when its economy is slowing and working-age population declining.

Today, China remains a friendless power lacking any true seafaring strategic allies or reliable security partners. Indeed, the more powerful China has become, the more difficult it has become for it to gain genuine allies.

Can Xi make China, without any allies, the world's leading power by relying on an open disregard of international rules and on bullying? Leadership demands more than brute might.

The assumption behind Xi's muscular approach -- that there would not be a significant geopolitical price to pay -- had thus far proved right, with other powers issuing words but shying away from actions. But with the pandemic and the move to strip Hong Kong of its autonomy, Tibet-style, Xi is courting an international backlash, underlined by a spate of actions from the U.S., EU, U.K., India and Australia.

Like the 1986 Chernobyl nuclear tragedy -- a prelude to the Soviet Union's fall -- the pandemic has shown how a communist regime worsens a disaster by seeking to cover up the truth about it. The pandemic, by highlighting the global costs of Xi's increasing authoritarianism, has made it more likely that the backlash will act as a spoiler to Xi's neo-imperial ambitions.

Countries are already reassessing their economic reliance on Beijing and seeking supply chain diversification away from China. One example is Japan's $2.2 billion fund to help reshore manufacturing. U.S. President Donald Trump, meanwhile, has opened the path to American sanctions against Chinese officials and companies.

With other powers still wrestling with the pandemic and a protest-scarred U.S. looking weak, Xi may take more aggressive actions to flex China's muscle. But unless he reverses course, his overreach is likely to saddle China with overwhelming costs while creating an international environment hostile to the realization of his dream.