Even with extradition bill delayed, foreign companies could move to Singapore or, perhaps, Tokyo 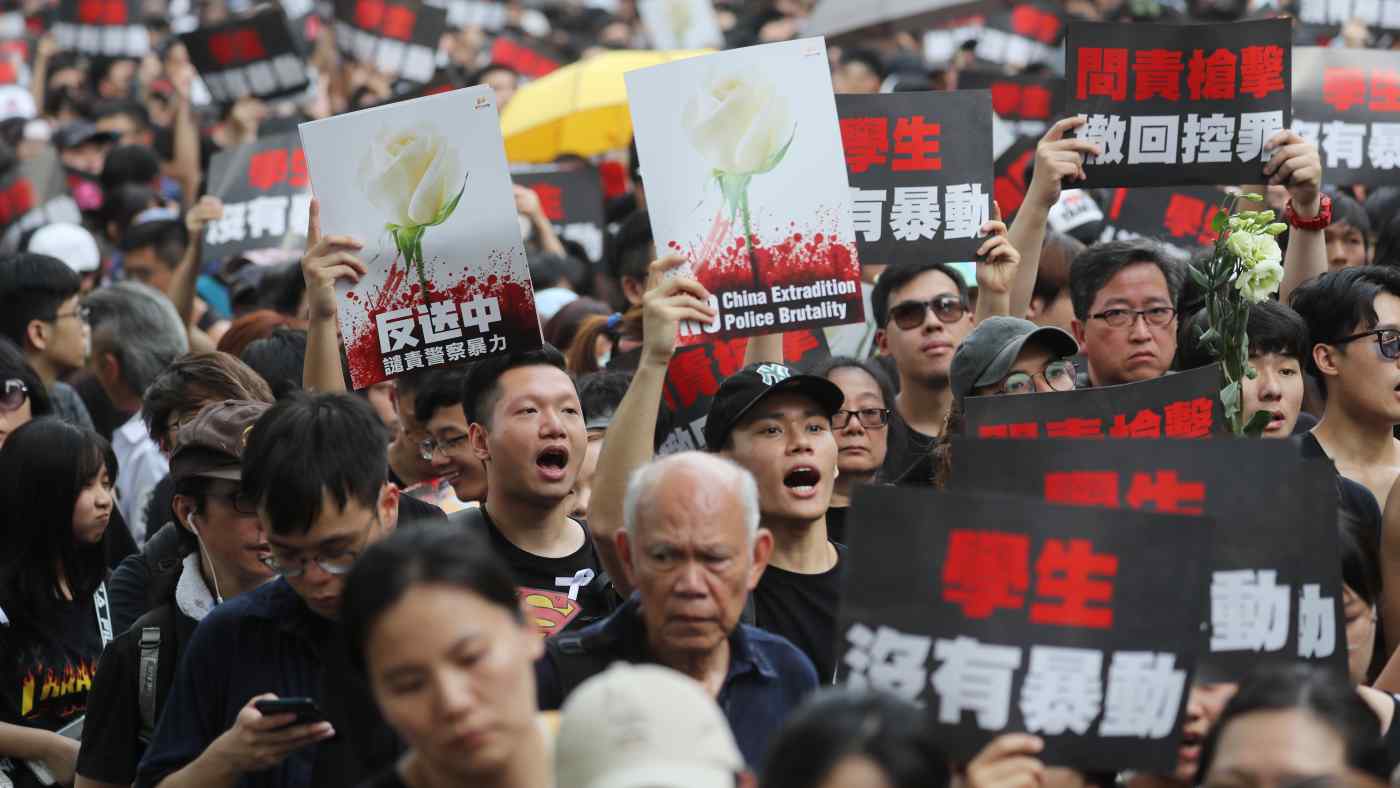 Hong Kongers' peaceful demonstrations made a mockery of Beijing's efforts to dismiss them as unmoored anarchists. (Photo by Kosaku Mimura)
CopyCopied

People power is alive and well in Hong Kong. For now, at least.

Huge protests have forced the city to delay an extradition bill that was supported by its Chinese overlords. But if you think this brawl is over, you have not been paying attention to the steady China-ization of Asia's "world city."

Hong Kongers certainly have. Organizers estimate that Sunday's (June 16) protest drew nearly 2 million people, almost double the size of one on June 9. Roughly 30% of the 7 million residents came out to tell Chief Executive Carrie Lam they don't trust her any more. Her -- very rare -- formal apology was dismissed as too little, too late. Lam faces calls to resign.

The return of tear gas to Hong Kong's streets could not come at a worse moment for the economy.

The last time such protests risked Hong Kong's standing as a global financial center was in 2014. Then, weeks of pro-democracy rallies eventually fizzled as Hong Kongers returned to the city's raison d'etre: doing business. This latest standoff may prove harder to handle.

It comes against a fragile economic backdrop, as China's slowdown drags Hong Kong down, too. And as deep-pocketed mainlanders send property prices far above the reach of middle-class Hong Kongers and millennials.

With its rule of law, transparency, free press and first-world banking system, Hong Kong thrives as China's financial green zone. But China-ization is no longer creeping, it is slapping Hong Kongers and expatriate executives in the face.

Hong Kongers achieved a marvel with their protests. Their peaceful demonstrations made a mockery of Beijing's efforts to dismiss them as unmoored anarchists. They were orderly. They made room for ambulances to pass. They offered safely helmets to journalists. They even recycled. Nobel Peace Prize, anyone?

Yet anyone who bets on the protesters over the Communist Party longer term is missing the plot. President Xi Jinping, the strongest Chinese leader since Mao Zedong, wants the unruly city across the Pearl River Delta to know who is boss. On his watch, Beijing delayed promised suffrage for Hong Kong, ejected lawmakers, jailed 2014 demonstration leaders, sent a Financial Times journalist packing and saw fit to kidnap a billionaire, booksellers and heaven knows who else.

This reflects Hong Kong's changing reality. When Hong Kong returned to mainland rule in 1997, China was much weaker in economic terms than today and inclined to protect the proverbial goose laying the golden eggs.

Now, an exponentially stronger Beijing is answering once and for all the big question of 1997: will China emulate Hong Kong's free-market success or seek to China-fy the place? The answer is China comes first, producing a new question: who are the winners and losers?

Count Singapore and, perhaps, Tokyo among the main beneficiaries. For years now, Hong Kong and Singapore engaged in a contest for corporate offices. It featured a race to the bottom on tax rates, limited red tape and liberal visa requirements. More recently, Tokyo has tried to revive its financial center status, with a push into fintech.

Hence the buzz about this being an existential moment for Hong Kong. Its status as commercial center rests on autonomy from a Chinese government pulling it ever further into its orbit.

But what of Shanghai, which China has been aggressively promoting over the last decade? Xi's team might not want Hong Kong to die, but giving Shanghai a boost in the Asian corporate base competition might be worth the risk.

Hong Kong cheerleaders dismiss this suggestion out of hand. But Singapore and Tokyo may thank their lucky stars. Taiwan's pro-independence moment, too. Lam's clumsy leadership has already changed the focus of the 2020 election campaign from economics to sovereignty -- and to reaching out to Hong Kongers. Xi cannot be happy.

Granted, predicting Hong Kong's demise has an unhappy history, as the city has taken Chinafication in its stride. Those who sold their Hong Kong property, for example, before the 1997 handover from Britain, are seriously out of pocket.

But, only time will tell whether this time the pessimists will be proved right.

Foreign executives in Hong Kong are not exempt from politics. In 2003, they were threatened by the planned "Article 23" anti-subversion laws: the vague wording had business people as well as journalists protesting.

This time, even with the bill suspended, there could still be a chilling effect in the form of further self-censorship. Might journalists in Hong Kong getting tips about malfeasance among tycoons close to Beijing look the other way? Might a hedge fund shorting a politically-connected company run foul of authorities? What about a foreign economist raising questions about the veracity of mainland data? Even with the bill off the immediate agenda, you may worry China's courts could one day reach you.

Hong Kong still benefits from a Chinese green-zone halo. But the timing of this Beijing versus Hong Kongers standoff could not be worse -- with local inequality rising and collateral economic damage coming from the U.S.-China trade war. An embattled middle class and angry youth may find common cause, fueling bigger protests. And raising bigger questions about why foreign businesses should stay.

Beijing has previously proved it can triumph in street battles with placard- and umbrella-waving citizens. But Xi could lose the bigger war if multinationals flee his growing orbit.