The real trouble is a chain reaction risk.   © Reuters
CopyCopied

While investors and the media obsess over Chinese President Xi Jinping's ability to keep top-line economic growth at 6% this year, the real action -- the real threat -- is unfolding beneath the surface of China's strained financial system.

The world's second-biggest economy ended 2019 with record corporate bond defaults, a result of the slowest growth in nearly three decades. More than 150 onshore companies reneged on debt payments totaling about $19 billion. That was up from 120 companies and $17.6 billion in 2018.

Fitch, S&P Global and other rating agencies are now warning of more to come as financing dries up for private companies, worsened by the global trade war and a decade of debt-fueled growth coming due. China's ratio of corporate debt to gross domestic product jumped to a record 160% by the end of 2017 from 101% 10 years earlier.

This year, Xi's team is going to need to stabilize things, testing Beijing's tolerance for the pain it will take to clean up China Inc.

There are rising concerns about where the cracks are appearing -- in smaller rural banks and local government financing vehicles whose excesses raise questions about systemic risk and the giant shadow banking system that lurks beneath it all in China's tilting economy.

In Shandong, one of the wealthiest provinces, at least six private companies acting on behalf of the local government either missed payments or were on the verge of missing them in the last three months of 2019. While Xi has cut taxes and fees to keep national growth above 6%, this diminished revenue is imperiling nearly $10 billion of outstanding Shandong debt. Consider deteriorating conditions there a microcosm of Xi's 2020.

Granted, the dollar amount of defaults is small relative to a $14 trillion economy. But last month, Tianjin-based Tewoo Group, a commodities trader, had to restructure $1.25 billion of debt -- the biggest such default by a state-owned company in two decades. Also in December, Peking University Founder Group missed a $285 million bond payment.

The good news is that regulators say they are taking unprecedented steps to build a transparent and efficient means of tackling defaults and bankruptcies. But they need to create mechanisms that offer specifics, not just generalities.

In an interview last month, People's Bank of China policy board member Ma Jun warned of a "chain reaction" unless bold action is taken. Ma's particular concern is companies that carry off-balance-sheet debt for regional economies.

These opaque local government finance vehicles, or LGFVs, have long raised concerns among China skeptics. With minimal transparency and oversight, they fuel a bewildering number of inefficient infrastructure schemes throughout the nation. Since the 2008 global crisis, LGFVs have been integral to meeting Beijing's annual GDP goals. 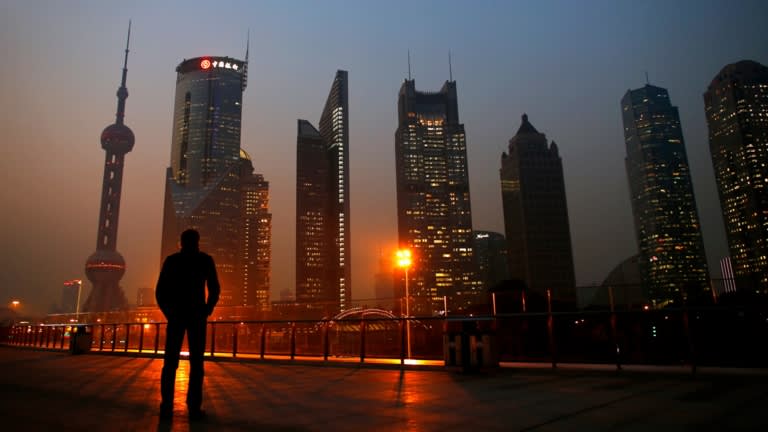 Shanghai's Pudong financial district: its local government had a 5% target for increasing revenue but only hit 0.8%.   © Reuters

The real trouble is the chain reaction risk Ma highlighted as more and more hidden debt comes to light. If investors panic and pull more capital out of Chinese bonds, Beijing's credit markets could seize up the same way Wall Street did in 2008. Such concerns explain why the central bank cut its requirement for how much cash financial institutions must hold in reserve by 50 basis points to 12.5% on January 1. The onus, though, is on Xi. Will he allow ever bigger defaults to happen in line with his stated goal to deleverage the economy? Reining in China's $10 trillion shadow banking system has been a particular focus. So far, Beijing has offered support but generally avoided bailouts. The government's seizure of Baoshang Bank in May was the exception.

That tolerance will be tested early and often this year as the trade war fallout intensifies and more LGFVs blow up smaller financial institutions in the shadow bank realm. Xi should let the market forces he once promised would play a "decisive" role in Beijing decision making take their course.

The easy road is aggressive government support to avoid a domino effect that shakes world markets. The better one -- and the way to tame the bad actors scurrying about below the surface -- is to shine more daylight on risks. In October, Moody's Investors Service noted that the banking industry shrank to a nearly three-year low in the first six months of 2019. It is still, however, roughly twice the size of Japan's GDP.

Reining in unruly borrowers would pave the way toward the well-functioning capital markets China needs to grow more productively and to price risk properly. It is high time Xi brought them above board.