That China's real GDP growth for the fourth quarter last year came in at 6% surprised absolutely no one.

That took full-year growth to 6.1%. This was the lowest figure in 29 years but above the magic 6% level that represents a psychological barrier for Beijing but nothing much in reality. There was no way the reported rate would have been allowed to fall below 6%.

Still, concealed within those figures was a bleak, worrying outlook for the Chinese economy which seems much weaker than headline data indicate.

Last year was challenging for China. Due to the rapid spread of African swine flu, which officially cut hog stocks by approximately 41%, pork consumption collapsed, driving up prices of other foods. The latest figures through December showed broad inflation running at 2.9%, with food prices up 9.2%, the biggest annual increases for both since 2011.

While real estate sector credit, and consequently building, are booming, potentially storing up problems for later, there is little evidence of robust growth in the manufacturing and industrial sectors. In 2019, clothes output was down 6%, metal-cutting machine tools 19%, power generation equipment 15% and packaging equipment off 5%. These do not speak to a robustly healthy economy, rather of excess capacity and years of overinvestment.

This broader weakness is trickling down to the consumer and services sectors. Smartphone and automobile sales are both down about 8%; monthly active users on food delivery apps were down more than 10% in December 2019 compared with a year earlier. 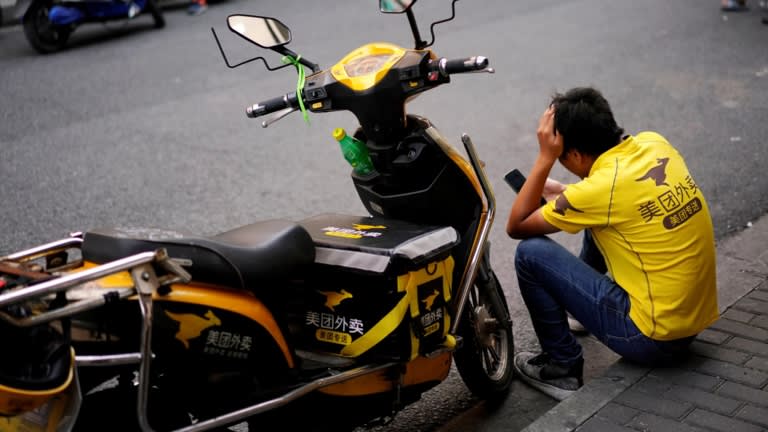 Monthly active users on food delivery apps were down more than 10% in December compared with a year earlier.   © Reuters

So what is all this telling us about the 2019 economy and the outlook for 2020? What turns this from a cyclical into a structural issue is that the Chinese economy continues to be driven by debt accumulation.

With accumulated debt running above annual income, Chinese households are now comparatively more indebted than their U.S. peers. It becomes harder to increase investment and consumption at the rates targeted by the Chinese Communist Party's central planners as consumers and businesses reach the limits of feasible debt loads while interest rates remain well above American, European or even Japanese bench marks.

Even if 2020 is the year China really starts deleveraging, it will likely be a decade or more before it reaches more sustainable levels.

This makes any significant growth rebound unlikely. Even with total social financing -- a broad measure of financing in the private sector -- outpacing nominal gross domestic product growth by nearly 3%, growth in credit to private companies was sluggish at best. Since Beijing has indicated it will not unleash a new massive stimulus package, growth is unlikely to come using the historical credit-fueled model.

Externally, China can no longer count on the U.S. as the consumer of last resort to keep its economy buoyant. Rather than a growth rebound, the most likely scenario with all these factors and a falling working-age population is a managed growth slowdown in the coming years.

The debate in China has focused on whether China should accept the new lower growth rate as normal or try to jump-start activity back to historical levels. If China lowered credit growth to mirror nominal GDP growth, it would generate enormous risk for businesses dependent on rolling over old debt and put pressure on real estate, a key driver of what growth there still is.

Over the past decade, as China has tried to hit increasingly unsustainable growth targets, it has narrowed its range of options for managing the economy. Although it is crimped by a range of cyclical and structural challenges into 2020, there is little doubt China will hit its target -- but that is no reason for optimism.

Someday China will have to reckon with its history of bad economic policy. But for 2020, the strategy is to delay the inevitable.

Christopher Balding is an associate professor at the Fulbright School of Public Policy and Management of Fulbright University Vietnam in Ho Chi Minh City and the author of an upcoming book on China's economic development tentatively titled, "The Great Transformation."