Washington must stand up for Manila, despite Duterte's overtures to Beijing

Manila and Washington will officially commence the annual review of their mutual defense treaty in late July, in what is likely be the most important review of its kind in a generation.

The allies are seeking to recalibrate their century-old alliance to new security challenges, headed by the threat from China.

And there is a growing sense of strategic urgency. The June 9 incident in Reed Bank, where a suspected Chinese militia vessel sunk a Filipino vessel in the South China Sea, has strengthened calls for a stronger Philippine-U.S. alliance.

What they should focus on next, however, is enhancing cooperation on maritime security, particularly as China scales up its expansionism with "gray-zone" tactics -- acts of aggression designed to intimidate and disrupt fisheries and military access by other claimant states, but which are short of armed clashes. These include deploying militia forces to the South China Sea.

This year's review will be far from routine. It comes just months after Philippine defense secretary Delfin Lorenzana called for a comprehensive review of the MDT in a rapidly shifting geopolitical environment.

A former defense attache in Washington D.C., Lorenzana even suggested scrapping the alliance altogether. Throughout the year, he has repeatedly raised doubts about Washington's commitment to assist the Philippines as tensions rise in the South China Sea.

Two things, however, are pushing the allies closer together. First of all, China is sending an armada of militia-cum-fishermen to contested areas of the South China Sea.

Between January and April, close to 300 suspected Chinese militia vessels swarmed and surrounded the parts of the Spratly Islands held by the Philippines. This went hand in hand with the growing harassment of Filipino fishermen in the Scarborough Shoal, which has been under the de facto occupation of Chinese paramilitary forces but is claimed by the Philippines.

Things came to head in June when a suspected Chinese militia vessel rammed and sank a Filipino fishing boat in the Reed Bank, an energy-rich area that falls within the Philippines' Exclusive Economic Zone. 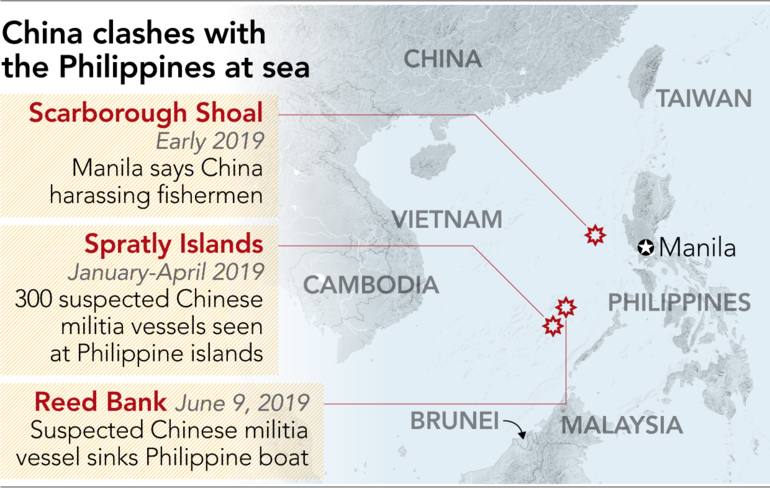 Eager to maintain friendly ties with China, Duterte stubbornly downplayed the incident as a "little maritime accident," effectively echoing Beijing's line, which described the event as an "ordinary maritime incident."

The Philippine defense establishment, however, has become ever more suspicious about China's intentions in adjacent waters. They see the latest events in the South China Sea as part of a broader Chinese "people's war at sea" strategy, where militia-cum-fishermen are the tip of the dagger of Beijing's maritime expansionism.

Leveraging their influence on the Duterte administration, which has actively courted the military's favor, the defense establishment is pushing for tighter cooperation with the U.S. against China, senior officials have told me. And they have major political figures on their side, with statesmen openly calling on the government to invoke the MDT against China in the South China Sea.

"The MDT is one yet untapped weapon. I am not suggesting World War III but at least it can make China feel the balance of power in the [South China Sea]," Senator Panfilo Lacson, an independent statesman, said at the height of the Reed Bank crisis. Surveys also repeatedly show that a majority of Filipinos see the U.S. as the Philippines' most trusted friend, while favoring a tougher stance against China.

The second factor behind the tightening bilateral alliance is the Trump's administration willingness to take the fight to China, expand its military footprint in the area and provide greater strategic assurance to allies such as the Philippines.

In recent months, Washington has progressively clarified the precise parameters of its alliance commitments to Manila in the South China Sea.

Months earlier, U.S. Secretary of State Mike Pompeo made a surprise visit to the Philippines, where he clarified that "as the South China Sea is part of the Pacific, any armed attack on Philippine forces, aircraft or public vessels in the South China Sea will trigger mutual defense obligations."

This was the first time that a senior American diplomat had openly explained the precise geographical scope of the Philippine-U.S. MDT.

More recently, against the backdrop of the Reed Bank crisis, the U.S. ambassador to the Philippines, Sung Kim, went so far as to say that "any armed attack" by "government-sanctioned... Chinese militia" against the Philippines' military forces, aircraft and public vessels in the area could also be covered by the alliance obligations.

To reassure its regional allies of its intention to draw the line in China's adjacent waters, the Trump administration has more frequently deployed warships to conduct so-called Freedom of Navigation Operations in the South China Sea; sent growing number of aircraft carrier groups to Philippine waters; and committed some of its most advanced assets, including F35 stealth fighters, to join military exercises with the Philippines in the area.

This year, the two allies are scheduled to conduct up to 280 joint military activities, the highest among American allies in the Indo-Pacific.

Amid these developments, Defense Secretary Lorenzana told me that scrapping or overhauling the bilateral alliance is no longer on the table. Instead, they are exploring the introduction of new operational guidelines, which will enhance their joint response to common security threats.

As long as unprovoked Chinese aggression in contested areas continues, the Trump administration should further clarify its commitment to defend its allies. Meanwhile, the Philippines should welcome expanded maritime security interoperability, more frequent joint war-games and even enhanced American military access to strategic bases close to the South China Sea.

This way, the two allies can better manage shared security concerns in the region and, along the way, reconfigure their alliance against emerging 21st-century challenges.

Richard Heydarian is a Manila-based academic, columnist and author of "The Rise of Duterte: A Populist Revolt Against Elite Democracy" and forthcoming "The Indo-Pacific: Trump, China and the New Global Struggle for Mastery."