The world has been transfixed by the massive anti-China protests which have shaken Hong Kong in recent months. As dramatic as these are, however, they are simply at the frontier of a regionwide backlash against China's apparent bid for hegemony.

If anything, it has deeply alienated the mobilized, assertive and politically savvy populaces of host nations.

Though their long-term trajectory is unclear, as the combination of organizational fatigue, internal rancor and lack of central leadership takes its toll, the message to the broader region is crystal clear: keep China at arms length.

"The only thing I know is that no matter how much money I earn" because of Chinese investments, one protester told me earlier in July, "freedom is something I can't earn from China."

These feelings echoed across the region, where nationalist sentiments are being directed against China.

In the Philippines, Beijing-leaning President Rodrigo Duterte has pursued closer economic ties with China while downplaying maritime disputes in the South China Sea. Three years into his tenure, however, the tough-talking Filipino leader is facing popular backlash over his relations with China.

On the one hand, large number of Filipinos are deeply worried about the prospect of a "debt trap" resulting from China's promise of large-scale infrastructure investments in the Philippines.

In particular, he alleged that the government placed assets from the national patrimony, including oil and gas resources within Philippine waters, as de facto collateral for Chinese infrastructure loans.

"We should do away with placing our [state assets] as collateral... Let's not be naive" about Chinese intentions, he told me, raising concerns over the debt sustainability under Chinese investments and the possibility of the seizure of Philippine assets in case of defaults. "No country will ever want to be in that position."

In fact, following public anger over reports of onerous economic deals with China, Duterte was forced to call for a review of all major infrastructure contracts with Beijing.

But the greater source of anxiety is China's aggressive maneuvers in Philippine waters, including a suspected Chinese militia vessel ramming a Filipino fishing boat in June. According to the latest Social Weather Stations Survey, 93% of Filipinos want the Duterte administration to wrest control of Philippine-claimed islands such as the Scarborough Shoal currently occupied by China.

Despite Duterte's best efforts to portray China as a friendly neighbor, the country remains the most unpopular foreign power in public opinion, according to the Pulse Asia survey early this year.

Throughout his electoral campaign, Mahathir repeatedly accused his predecessor, Najib Razak, of undermining the country's sovereignty by risking a debt trap under questionable Chinese investment deals.

Tapping into anti-China sentiments, Mahathir took the fight to Beijing once in power. During his visit to China last year, the Malaysian maverick openly accused China of engaging in "a new version of colonialism" through lopsided economic deals with smaller neighbors, which benefit corrupt local elites at the expense of poorer nations. 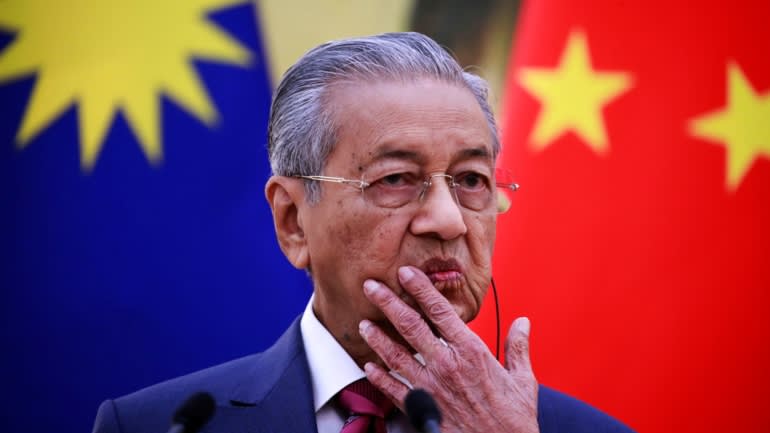 Mahathir openly accused China of engaging in "a new version of colonialism" during his visit to China last year.   © Reuters

"When you borrow money which we cannot repay, you are endangering your own freedom," the Malaysian leader told me earlier this year. "It is important for China to take notice of other views and perceptions."

In Indonesia, the region's largest nation, anti-China sentiments have taken a darker turn. President Joko Widodo has repeatedly come under attack by his rivals, especially opposition leader Prabowo Subianto, for supposedly kowtowing to China. The Indonesian leader even faced questions over his ethnicity, with his rivals falsely portraying him as originally Chinese.

According to a Pew Research Center survey, favorable views of China in Indonesia dropped from a high of 66% in 2014 to 53% in 2014, as more perceived the communist powerhouse as encroaching on Indonesian sovereignty. This is while tensions were rising in the North Natuna Sea, where China's "nine-dash line" marking out its claims in the South China Sea overlaps with Natuna Islands' waters, but also as Chinese investments flowed in.

Even Chinese-majority Singapore is taking a harder line against Beijing, recently passing new legislation which aims to counter Chinese influence operations in the city-state, as well as cracking down on suspected Chinese spies, including in prestigious academic institutions.

Across Asia, there is overwhelming anxiety over China's recently hamfisted foreign policy, including maritime expansionism in adjacent waters and controversial investment deals driving smaller states into bankruptcy, and bid for hegemony. This partly explains a near-universal preference for American leadership. According to a Pew Research Center survey last year, more than seven out of ten respondents across Asia favored U.S. leadership over China's.

Far from an inevitable march toward Chinese hegemony, what we are instead witnessing is growing reassertion of autonomy and collective dignity among Beijing's near neighbors. The Hong Kong protests are only the most dramatic manifestation of the widening anti-China backlash.

Richard Heydarian is a Manila-based academic, columnist and author of "The Rise of Duterte: A Populist Revolt Against Elite Democracy" and forthcoming "The Indo-Pacific: Trump, China and the New Struggle for Global Mastery."