China's plan to end the anonymity of cash

'E-yuan' will enable deeper monitoring of payments and transactions 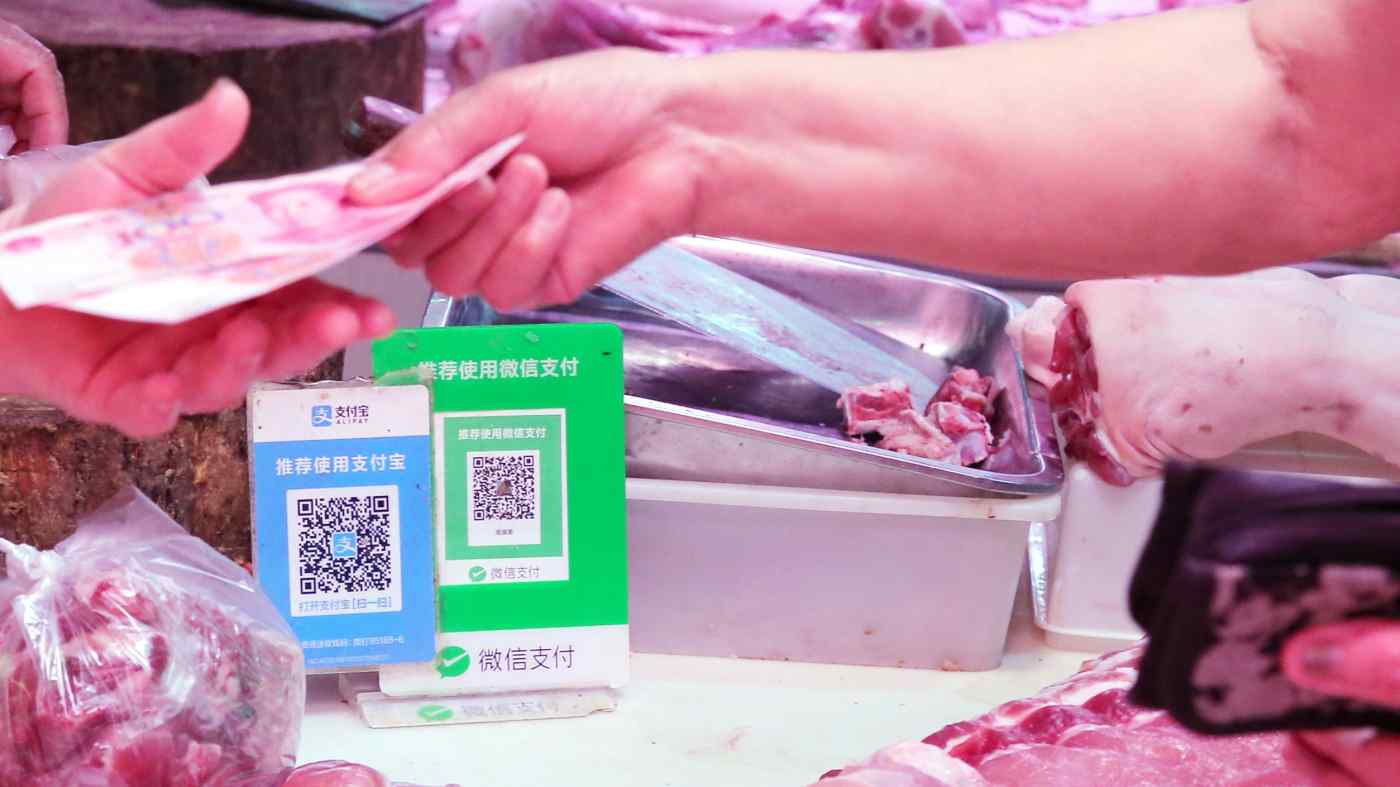 A customer pays cash, in front of QR codes for Alipay and WeChat Pay, at a pork stall inside a market in Nantong, China.   © Reuters
CopyCopied

With cash playing a dwindling role in payments in China, the country's central bank is working on another way to get into citizens' wallets.

The People's Bank of China's notion is to create a digital version of the yuan that could win back a significant share of the payments now being made through private operators Alipay, the service linked to Alibaba Group Holding, and rival WeChat Pay from Tencent Holdings.

For the central bank, this, though, isn't about seizing a business opportunity. Rather, the PBOC sees digital currency as giving it a technological tool that will dramatically improve its capacity to monitor what Chinese people and companies are doing with their money and take away some of the attraction of cryptocurrencies. This, in turn, would serve official aims to improve tax collection and enforce foreign exchange controls as well as generate new ways to implement monetary policy.

The PBOC should not go too far. Although the convenience of digital payments is undeniable, a government move to replace physical cash with an official digital currency must preserve a degree of individual privacy in payments. While the central bank says it would protect privacy, if there is a technological backdoor to people's wallets, it will be used. The best approach would be to allow small denomination cash to remain in use indefinitely.

Given how quickly Chinese have adopted electronic payments via mobile phone apps, Beijing looks likely to achieve the PBOC's aim of phasing out most, if not all, physical cash use over the next decade or so. Moreover, its regulatory muscle means it probably can nudge out Alipay and WeChat Pay once the central bank works out the kinks with the e-yuan.

For Chinese consumers, the yuan and e-yuan would have the same value and be differentiated only in the sense that the former is physical cash while the latter is electronic. In a similar way, paying with e-yuan might seem little different from using Alipay or WeChat Pay.

This will depend, though, on PBOC decisions on the design of the new digital currency including whether existing payment apps will be able to route transactions via e-yuan digital wallets. To accelerate uptake, the e-yuan will need to be at least as convenient as existing payment apps.

Indeed, the PBOC still has a lot to figure out about how to make the e-yuan work. Its Digital Currency Research Institute, which opened last year, has been recruiting specialists in areas such as cryptography. It has also filed more than 40 patent applications related to the technology infrastructure for electronic money.

At the least, it seems the e-yuan will involve the creation of personal digital wallets through which payments can be made directly and which could potentially function offline. By contrast, Alipay and its ilk handle payments through online processing networks.

Yao Qian, head of the research institute, has said that an e-yuan would be superior to existing Chinese electronic payment systems in that it would be publicly issued and controlled. It would also, he said, break the wall dividing payments and monetary policy which would potentially allow the central bank to move nominal interest rates well below zero if necessary to stimulate credit and spending.

As newly appointed PBOC Governor Yi Gang put it in April, "We are studying how to use the positive energy of digital currency to better serve the real economy."

The PBOC isn't the only central bank seeking to introduce a digital currency. Counterparts in countries including Venezuela, Senegal, Sweden and Tunisia are also working on such projects. The South Pacific's Marshall Islands is among the most aggressive in moving ahead with a digital currency though the International Monetary Fund has expressed concerns.

Zhou Xiaochuan, who stepped down as governor of the PBOC in March after 15 years in the role, previously listed four motives for the yuan project: reducing costs from issuing and circulating paper money, improving convenience and security, enhancing monetary policy, and boosting monetary sovereignty.

While the PBOC has not publicly estimated the cost of physical cash payment infrastructure, including bank tellers, ATMs and secure transport, it could be in the order of 0.5% of annual gross domestic product, or 414 billion yuan ($59.61 billion) for 2017 based on international comparisons.

Despite the sharp rise in the volume of small-scale electronic payments in China, the hoarding of paper money remains a fact of economic life. According to PBOC data, currency in circulation outside banks amounted to 7.13 trillion yuan at the end of March, or about 5,012 yuan per person. Of that, 86% was in the form of 100 yuan notes, the largest denomination.

Yet despite Zhou's comments, currency notes are a moneymaker for the PBOC. As with other central banks, it profits from the difference between the face value of the notes it issues and the cost of their production.

The more significant issue for the central bank is the nexus between cash and the underground economy. As is true elsewhere, Chinese companies frequently use cash to evade taxes or regulations. Corruption and money laundering also often involve the handling of large amounts of cash. One recent estimate put the overall size of China's shadow economy at 14.7% of GDP.

Beijing hates bitcoin for similar reasons. While bitcoin is not truly anonymous, its use to potentially sidestep foreign exchange and other regulatory controls has led the authorities to take an increasingly hard line.

Under official pressure, Alipay and WeChat Pay recently barred account holders from using their platforms for cryptocurrency-related purposes while Beijing and other city governments have banned the holding of crypto-related events. Online crypto chat groups have been shut too.

In contrast to bitcoin, the e-yuan is being designed to offer "controlled anonymity." Under this principle, individual users' identity and details of their transactions will not be revealed to third parties without their consent. However, the authorities will still be able to access information about users' digital cash wallets if considered necessary.

Much remains to be seen about how the e-yuan is implemented but the PBOC's digital currency plan appears likely to succeed. The central bank will continue to leverage its regulatory oversight over private payment services as well as its control over the country's commercial banks to develop a new digital currency infrastructure.

To phase out large denomination notes to boost use of the e-yuan, the PBOC can stop issuing new paper currency, require banks to hand in their stock of notes or set an expiration date for outstanding notes. Depending on the reporting requirements, it is possible that a large share of laundered cash might never be exchanged for e-yuan.

By developing a centrally controlled digital currency, the PBOC will have a powerful new surveillance mechanism which it can use to squeeze the cash economy. The result would be a much more powerful central bank within China as well as internationally. Once again, China's model of technologically powered authoritarianism would likely hold a degree of appeal for other governments. Luke Deer teaches banking and finance at the University of Sydney.