China's subjugation of ASEAN is a great leap backward for Myanmar Almost as if coordinated, China and the Association of Southeast Asian Nations took major steps toward recognizing Myanmar's newly minted military dictatorship within a day of each other in early June.

In Yangon, the Chinese embassy issued a statement after the ambassador's first meeting with the junta chief, referring to the general as "Myanmar's Leader." Meanwhile, ASEAN's indirect endorsement came in the form of a statement summarizing the purported success of the secretary-general's visit to Myanmar's capital, which referred for the first time to junta chief, Senior Gen. Min Aung Hlaing as "chairman" of the junta's State Administrative Council.

The statement drew sharp complaints from several ASEAN member states, fueling widespread media criticism about the glacial pace of the group's promised Myanmar diplomacy -- including its five-point consensus plan to halt the state-led violence. The Secretariat later deleted the statement from its website, raising questions about its competence and the capacity of Brunei as the group's current chair.

It is clear from Myanmar-related developments in the international arena that Min Aung Hlaing has consolidated control over the ASEAN process.

This could be seen in the events leading up to the recent special ASEAN-China Foreign Minister's Meeting in Chongqing where the junta peddled its own five-point blueprint for "disciplined democracy" -- laying out plans for a period of martial rule leading to elections. This plan now sits awkwardly alongside the five-point consensus hammered out in April by ASEAN leaders in Jakarta.

That the general has enhanced his absolutist agenda owes more to the incompetence of ASEAN than the junta chief's diplomatic acumen. China, meanwhile, has, by intention or otherwise, undermined ASEAN's already battered cohesion, with the Chongqing meeting illustrating how far Beijing has supplanted ASEAN centrality.

China's response to the Myanmar coup reveals how far ASEAN's preeminent regional role has been eroded. Absent from the new five-point consensus on Myanmar released by China's foreign ministry following the Chongqing meeting was any mention of appointing a special envoy.

Instead, the new China-ASEAN consensus emphasized assistance for Myanmar's economic recovery, COVID-19 aid, political dialogue, the end of all forms of violence, and the prevention of unilateral sanctions. In a clear swipe at mediation efforts by the United Nations and other would-be interlocutors, it also warned against other forms of "inappropriate interference." 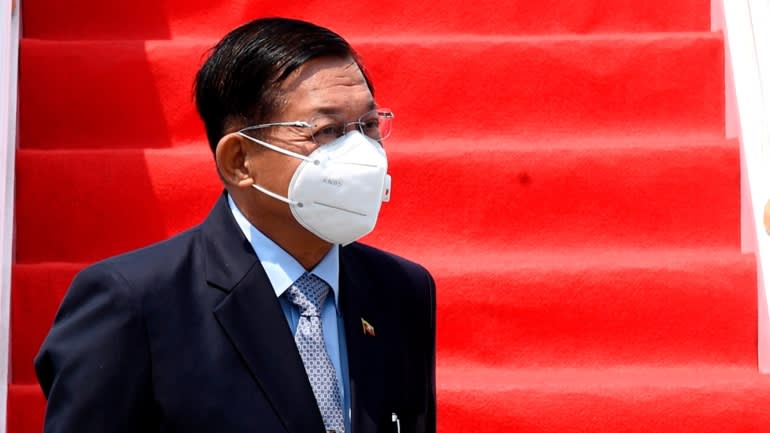 This leaves ASEAN effectively right where China and Min Aung Hlaing want it: using the group's veneer of centrality to entice others into supporting a futile and divisive process that will delay efforts to prevent the junta from establishing rule by violence.

With over $100 billion invested in a gargantuan connectivity scheme that harnesses the Myanmar economy and provides China's southwest provinces access to Myanmar's gas and oil and an Indian Ocean port, China is playing a high stakes game by backing the junta.

Just before the Chinese ambassador met the junta chief, Beijing closed the door to a National Unity Government representing the ousted National League for Democracy government and key anti-coup figures.

As opposition to the coup grows amid mounting public fury at Beijing's support for the junta, the NUG's subsequent letter of protest signaled an end to its previously cautious posture toward Beijing and suggests much harder times for China's commercial and political interests. The bombing of a Chinese factory in Yangon on June 11 was an ominous sign of what may come next.

Further fanning anti-China sentiment among protesters was the junta's moves to reward China with approval of long-coveted investment projects essential to its sweeping China Myanmar Economic Corridor. These include the Kyaukphyu port and special economic zone, a multibillion-dollar energy project and a massive cross-border industrial zone on the China-Myanmar border.

China may think it has successfully molded an endgame scenario that keeps the military in power at Beijing's mercy. But China's frenzied regional diplomacy is a step backward. Violence in Myanmar will continue, as will the unfolding regional security crisis arising from Myanmar's economic collapse.

This puts more pressure on concerned states like Indonesia, Malaysia and Thailand to make difficult and bold decisions. Can they begin working outside a failed regional association? Can they take the lead in forging a partnership with India, Japan, the U.S., or other concerned states? Might a new configuration of concerned parties emerge that can forge a robust response to the real driver of instability: Myanmar's military?

It is time for those hoping to see a viable state in Myanmar to recognize the harsh reality: ASEAN has effectively been neutered by China and has lost any ability to effectively address a regional crisis prompted by one of its members.

The Quadrilateral Security Dialogue comprising Australia, India, Japan and the U.S. now has a chance to dramatically re-envision itself as a regional security platform that can take the bold steps ASEAN cannot or will not.

It should begin by appointing its own Quad envoy to focus on Myanmar's neighbors, especially China, and hopefully persuade Beijing that in misreading Myanmar's stability, it is undermining the regional stability that is the bedrock of any successful economic initiative.