China should not be allowed anywhere near the TPP Suga and Morrison should tell Beijing thanks but no thanks.   © Reuters
CopyCopied

Xi Jinping does not tweet. China's president, though, just established himself as a master troll as he raises Beijing's hand to join the Trans-Pacific Partnership trade deal.

Originally with 12 members, the TPP started out as history's biggest trade pact. It was a U.S.-led multilateral bulwark against one giant player -- Beijing -- setting prices and rules and using its scale to continue bigfooting the World Trade Organization system. Then U.S. President Donald Trump came along in 2017 to leave TPP at the altar -- and make Xi's year.

That left a gaping void that Xi has just leapt into by joining the 15-nation Regional Comprehensive Economic Partnership, eclipsing TPP. Expectations are that President-elect Joe Biden will rejoin TPP come January, making Japanese Prime Minister Yoshihide Suga's 2021. And even though Japan joined RCEP -- Tokyo, Canberra and Seoul view it as something of an open marriage with mercantilist Beijing.

Not so fast, Xi says. Beijing is considering joining TPP, front-running a Biden administration that does not begin until Jan. 20. China should not be allowed within a mile of TPP. And it might fall to Suga and Australian Prime Minister Scott Morrison to tell Xi why.

For all its flaws, remember that TPP, or the Comprehensive and Progressive Agreement for Trans-Pacific Partnership, or CPTPP, as it is now officially known, is everything RCEP is not. That is, a carefully targeted effort not just to lower barriers to commerce, but to enshrine levels of protections for labor, environmental sustainability, intellectual rights, property rights and bans in state-sector subsidies that Xi's China will never accept.

RCEP cynically avoids these third-rail issues, making it a ginormous 2.2 billion person do-not-do-not-tell special enterprise zone. Of course, it is a big accomplishment to get China, Japan and South Korea to agree on anything. RCEP also ropes Southeast Asia, Australia and New Zealand into a grouping that reminds us that even in the Trump era cooperation can happen.

It is, however, free trade-lite by design. RCEP compartmentalizes areas in which China will not cede -- surprise, surprise! -- making it a vague tariff-lowering framework without any teeth. The only way China enters TPP is by watering it down to mediocrity and larding it so completely with loopholes that the one new industry it will create is a TPP legal profession.

TPP was designed "to be almost China-proof, with stringent obligations requiring transparency and trade liberalization," says Gary Clyde Hufbauer of the Peterson Institute for International Economics. Around that time, then-U.S. Trade Representative Michael Froman said Beijing might be welcomed only if it meets TPP ideals.

That's a Great Wall-sized if. Instead, TPP should go the other way. First, get the U.S. back on board. Next, entice South Korea, Indonesia, the Philippines and others to join. Best to improve TPP, not water it down.

Suga and Morrison, as heads of two China-reliant democracies already at loggerheads with Beijing, might have to be the bad guys here. They should do a Zoom call with Biden early on, agree on a secret handshake and tell Beijing thanks but no thanks.

Granted, after four years of Trumpian chaos and cronyism, America's international credibility is almost as bad as its COVID-19 response. Xi is betting, too, that China offering to join TPP will make rejoining politically toxic for Biden's America.

Biden, though, is a chance at a reboot. His selection of Antony Blinken as Secretary of State and Janet Yellen at Treasury, officials who know Asia well, suggests that his White House will work with this region, not bully it. TPP is the ideal forum for the healing to begin. After four years of pivoting away from Asia, Biden needs to get Washington back in the game. And to ensure that China does not call all the shots in the decade ahead. 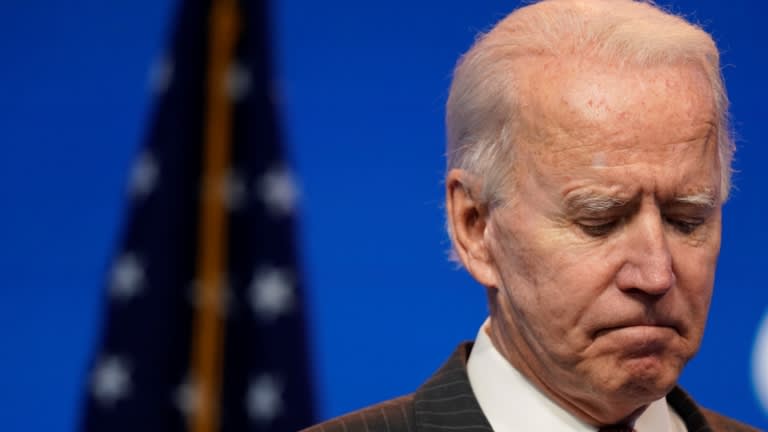 Biden needs to get Washington back in the game.   © AP

Trump got something very basic wrong on China. It is not that the Communist Party "steals" from America. It is that China ruthlessly locates and exploits every WTO loophole for maximum gain. Its huge trade delegation in Brussels operates like the raptors of "Jurassic Park" fame. They spend 24/7 testing the WTO's fences for weaknesses.

One of the best trolls of the Xi era was China taking a case against Trump's tariffs to the WTO and winning. Ouch! It is but one example of how Trump's amateur-hour White House lost the trade war and handed China the future.

Even the trade deficit with China is bigger today than in 2017. And struggling American households are out tens of billions of dollars out pocket thanks to the bailouts Trump handed farmers bankrupted by his policies -- borrowed from Xi's people, of course. Ouch, again.

Once the U.S. reenters TPP, the pact should hold a series of Group of Seven-style summits for national leaders and trade, finance, and central bank officials. There, Pacific nations can join hands and brainstorm on ways to contain the coronavirus pandemic -- and future ones. They can mull creative ways to link bond and stock markets, build deeper currency swap networks, and even pool foreign-exchange reserves.

Asia needs a framework for pushing back against China's land grabs in the South China Sea and economic ones -- present and future. Since strength is the only thing that gets the attention of Xi's government, it is time to grow TPP, not China-fy Asia's future.