Is China's insecurity over the restive Tibetan Plateau, which has already led to a major military standoff between the two Asian giants along their long and treacherous Himalayan frontier, driving President Xi Jinping's belligerent policy toward India? The extended standoff has certainly raised the risks of further localized battles or another full-scale border war.

Xi recently underscored his regime's anxieties by ordering Communist Party, government and military leaders to turn remote Tibet into an "impregnable fortress" against separatism and "solidify border defenses" to ensure frontier security with India. He also called for the Sinicizing of Tibetan Buddhism to help accelerate the Tibetan minority's assimilation into the dominant Han culture.

Xi has sought to ruthlessly root out all signs of unrest in Tibet, the world's largest and highest plateau that is very far from Beijing. Tibet's capital, Lhasa, is more than 3,500 kilometers from the Chinese capital, but only 1,356 kilometers from New Delhi.

The Tibetan frontier with India was largely peaceful for centuries before China occupied Tibet in 1951. With its conquest of the "Roof of the World," China enlarged its landmass by more than a third and fundamentally altered Asia's geostrategic landscape.

After imposing itself as India's neighbor, China refused to accept the Indo-Tibetan boundary's customary alignment, which led to a bloody border war in 1962. That war, however, didn't settle the territorial disputes, with China subsequently laying claim to more Indian territories beyond those it seized in 1962.

As China's encroachments into India's northernmost highlands since April show, Beijing is claiming these areas on the basis of alleged Tibetan ecclesial or tutelary links, even though Tibet only became part of China when China itself had been conquered by outsiders such as the Mongols and the Manchus.

The plain fact is that Tibet, despite disappearing as a buffer, remains at the heart of the China-India divide, fueling land disputes, diplomatic tensions, and -- given that most of Asia's great river systems originate on the Tibetan Plateau -- feuds over the Chinese re-engineering of cross-border river flows.

Under Xi, China has introduced measures to snuff out Tibetan culture and cut Tibetans off from ancient traditions, including herding and farming. Recent reports have shed light on a coerced labor program to forcibly assimilate Tibetans, including through military drill-style skills training. China has also forced the last remaining Tibetan-language school to teach in Chinese.

India, however, has been funding Tibetan-language schools for its large Tibetan refugee community. The Dalai Lama, who says the Chinese Communist Party has transformed Tibet into a "hell on earth," has spearheaded the effort to maintain Tibetan culture from his home in India. 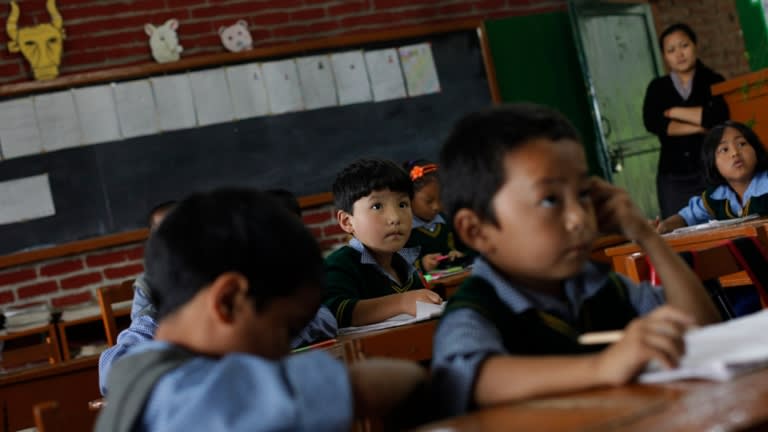 Tibetan children study at a school in the northern Indian hill town of Dharamsala.   © Reuters

For Xi, capturing the 442-year-old institution of the Dalai Lama is a pivotal final step toward securing China's hold over Tibet.

India, however, continues to stand in the way of Xi's plan to install a pawn to succeed the current 14th Dalai Lama. Underscoring the sharpening geopolitics, the U.S. Congress is close to passing the new Tibetan Policy and Support Act, which mandates financial and travel sanctions against Chinese officials who interfere in the Dalai Lama's succession.

India, acting on the Dalai Lama's instructions, could tacitly help Tibetan exiles find, appoint and protect his successor. The Dalai Lama has said his "reincarnation will appear in a free country," which could mean in India's Tibetan-Buddhist Himalayan regions. This explains why China has intensified its claim to Tawang, the birthplace of the sixth Dalai Lama.

Despite catching India's military off-guard in Ladakh, located more than 1,500 kilometers from Tawang, Xi seems to have greatly underestimated India's capacity to recoup from initial setbacks and fight back. About a month ago, Indian special forces stunned China by occupying vacant mountain heights overlooking key Chinese positions on the southern side of Ladakh's Pangong Lake. Even more humiliating for Beijing is the fact that the Indian operation was spearheaded by a special force made up entirely of Tibetan exiles.

India rubbed salt in the wound by holding a largely-attended military funeral for a Tibetan soldier killed in that operation, with his coffin draped in both the Indian and Tibetan national flags. The funeral's key message was that, just as China uses Pakistan to contain India, New Delhi can use Tibet as leverage against Beijing. 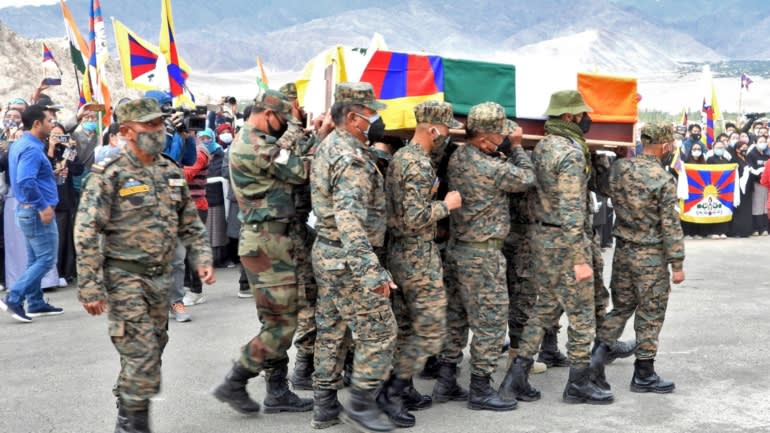 Commandos of India’s all-Tibetan Special Frontier Force carry a coffin containing the body of their comrade Tenzin Nyima during his cremation ceremony in Leh on Sept. 7: the funeral's key message was New Delhi can use Tibet as leverage against Beijing.   © Reuters

India's daring seizure of the heights has drawn international attention to its secretive, all-Tibetan Special Frontier Force, established after Mao Zedong's 1962 war with India. The itch to fight the occupiers of their homeland has drawn Tibetan recruits to this force.

Xi, China's most powerful leader since Mao, is working to complete Mao's expansionist vision, from the East and South China Seas to the Himalayan region. But his aggression against India may not be progressing as planned.

His real achievement may be sowing the seeds of the world's next big conflict and ensuring the rise of a more antagonistic India. This means Tibet's shadow will only grow longer over China-India relations in the coming years.