Chinese deflation? A risk for 2019

Inflation concerns give way to worries about Japanese-style price stagnation What a difference a year makes when you are trading Chinese bonds.

Twelve months ago, dealers in China's $2 trillion government debt market braced for a wipeout. Ten-year yields surged above 4% amid worries overly loose monetary policy might fan inflation. That, in turn, fueled fears of a wave of corporate defaults. Now, the opposite risk may be at play: deflation.

It is premature to say China is coursing toward a Japan-like falling-prices drama. Yet recent data warrant a moderately sized blip on investor radar screens. In November, consumer prices slid 0.3% from a month earlier, while producer prices fell 0.2%. On a year-on-year-basis, producer prices advanced just 2.7% in November, the weakest reading in two years (consumer prices are up 2.2% from a year ago).

Bond traders are taking no chances. Earlier this week, 10-year yields dropped to 3.27%, the lowest in more than 18 months. And, really, they have every reason for gloom considering the headwinds blowing China's way -- and how they may intensify next year.

Donald Trump's trade war is the main source of turbulence. Odds are, the U.S. president has just started. His yearslong dream of halting China's rising dominance collides with a White House in crisis -- and desperate to change the subject from seemingly-ubiquitous Trump-linked legal probes. 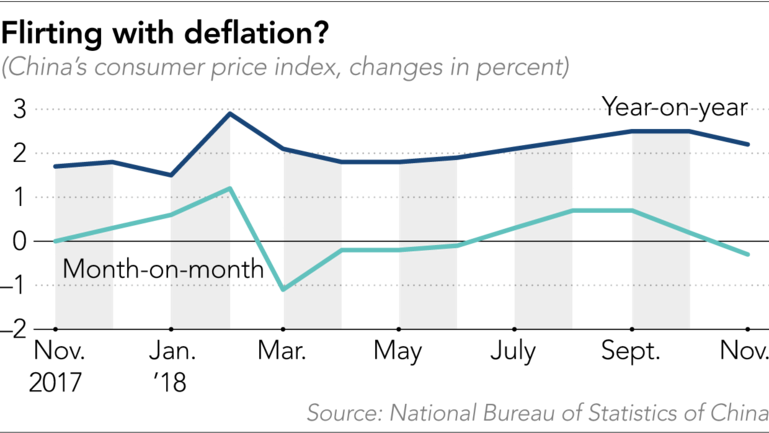 Already, China has seen a marked downshift in exports. November's 5.4% increase from a year earlier was half what economists predicted. Fixed-asset investment is slowing. Beijing's official purchasing managers index showed manufacturing activity stalled in November for the first time in the more than two years. It stood at 50. Anything below that reading denotes contraction. Meanwhile, stocks in Shanghai and Shenzhen are sliding, down 20% and 29% this year, respectively.

Given the carnage in equities, one would expect a rush into bonds. But the bond rally is curious for other reasons. The supply of new debt issues, for example, is sure to increase as Beijing ramps up fiscal stimulus to support growth. Should President Xi Jinping's government relax its 4% fiscal deficit target for 2019, investors will see more debt on offer.

China also is on course for a current-account deficit. Efforts by Xi's team to rebalance the economy toward domestic consumption, away from exports, is beginning to show results. In 2019, Fitch Solutions envisions a current-account deficit of 0.3% of gross domestic product. While minuscule, it could accelerate capital outflows that weaken the yuan and, in turn, bonds.

Yet bond traders are focused on waning growth prospects. China's chances of keeping GDP growth anywhere near 2018's 6.5% target are fanciful. Recent steps to cut taxes, ramp up corporate lending and gin up new infrastructure may ease the pain. But China's $14 trillion, trade-reliant economy is vulnerable to Trump tariffs. As demand wanes, so do domestic price pressures.

That has some observers pushing Tokyo comparisons that Xi's team must heed. "Similarities between Japan in 1991 and China today have raised concerns that the world's second-largest economy may be entering a Japanese-style lost decade," says Carlos Casanova, Hong Kong-based economist at French trade credit insurer Coface.

Is China, like Japan before it, seeing excessive credit growth meant to prop up equities and property? Check. Are public debt levels worrying global markets? Yes -- roughly 260% GDP worth (160% for corporate debt). Is Beijing facing external challenges? Indeed. For Japan, it was the U.S. and other industrialized nations demanding a stronger yen; for China it is an antagonistic White House determined to regain trade advantage.

The good news: China's Communist Party-run model has far more control over all economic levers. Xi's government also has the benefit of learning from Tokyo's mistakes, including avoiding a sharp increase in the exchange rate. "But notwithstanding these caveats," Casanova says, "a series of factors are pointing toward China's slide in the direction of a lost decade of its own."

Xi's team should take this risk seriously if China is going to beat the so-called middle-income trap. China's per capita income remains below $9,000 in nominal terms.

Keeping China on track to top $10,000 requires multiple multitasking. In the short run, Beijing needs an adequate and proportionate monetary and fiscal response to prevent accelerating price drops. An increase in deflation chatter would have a damaging effect on domestic business sentiment and perceptions among global investors.

But, at the same time, Xi's team must keep the reform process alive. The reason punters and credit rating companies forgive China's imbalances is faith in Xi's 2013 market-forces pledge. So far, his promise to let them play a "decisive role" in Beijing decision-making has met with mixed results. Still, this is no time to back away from curbing runaway credit, shadow banking activity and weaning the economy off smokestack industries.

Any fresh stimulus needs to be targeted and prudent. Even as they work to support growth, regulators must be bolder about reducing excessive leverage. The People's Bank of China should get creative. It has not cut its 4.35% benchmark 1-year lending rate since October 2015. Rather than broad rate cuts, the PBOC has used margin requirement tweaks and other tools to cut borrowing costs. The next steps should be to direct liquidity at struggling sectors, particularly small-to-midsize enterprises.

Indications are that the corporate deleveraging imperative the Communist Party spelled out in October is being shelved. That is a mistake. The main take-away from Japan's failings in the 1990s is that the more you delay, the worse things get. That means coming clean fast on bad loans and disposing of them expeditiously.

Unfortunately, Beijing's incentive structure can have the opposite effect. The hundreds of billions of dollars Xi's government is lavishing on its "Made in China 2025" project risks solidifying the standing of state-owned enterprises, not creating a vibrant private sector. Sure, China has a busy startup scene, but the vast majority of economic oxygen goes to the giants.

To be sure, deflation is not a given. Over the last decade, Chinese officials have proved adept at keeping economic growth strong. Yet the signals coming from bond traders suggest 2019 may see more obsessing over price data than GDP targets.