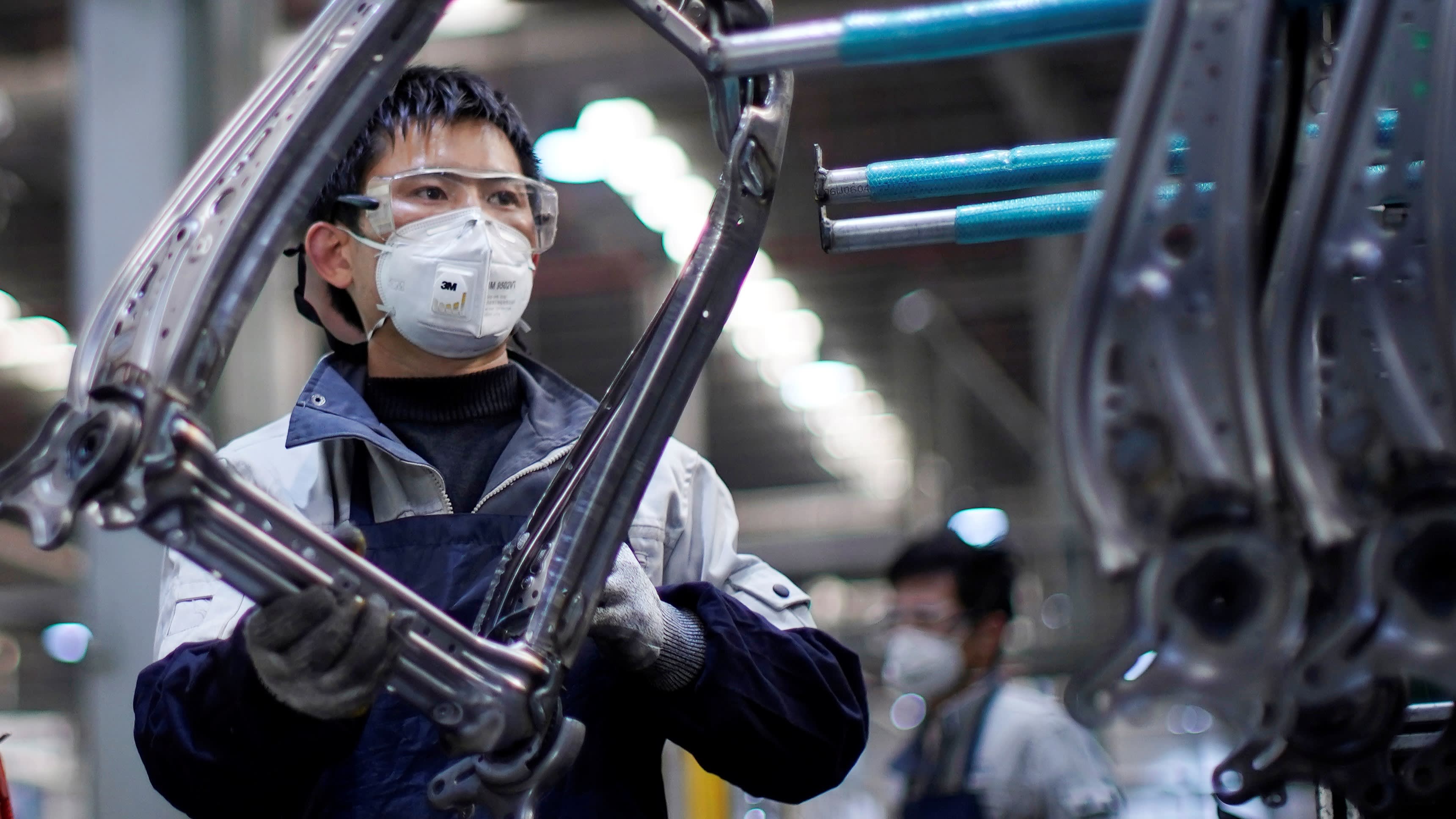 An employee wearing a face mask works on a car seat assembly line in Shanghai on February 24: the coronavirus is putting the model for integrated supply chains of production to the test.   © Reuters
CopyCopied

More abrupt and unexpected than the U.S.-China trade war, the Wuhan coronavirus outbreak has become a wake-up call for international companies about the risks of excessive dependence on China.

It is already proving a far bigger shock than the 2003 severe acute respiratory syndrome, or SARS, outbreak. This is because China's economy is now more than eight times larger than it was then and its importance to the global economy has grown even faster.

The country has become a large and vital market for international companies ranging from Apple to Adidas. But with millions of Chinese people confined to their homes and most malls and stores shut, domestic demand has collapsed for the majority of goods and services.

Online retail is an exception but is generally dominated by domestic companies. China's auto market, important to foreign companies, has virtually ground to a halt.

Beyond the expansion of China's economy, it has also become much more sophisticated and integrated into global value chains since 2003. With factories across China now closed or operating well below full capacity and much of the country's domestic and international transport halted, the Covid-19 virus has had an unexpectedly large impact on many overseas manufacturers.

Like a number of international carmakers, Nissan Motor and Toyota Motor have had to halt production at some factories in Japan because of the interruption in the supply of parts from China. Indian pharmaceutical companies have warned that their output is at risk from disrupted shipments of Chinese ingredients. Western manufacturers of industrial electronics complain they cannot get the Chinese circuit boards their machines require. Operations at Nissan Motor Kyushu were halted on Feb. 14 due to a lack of parts from China. (Photo by Shinya Sawai)

Over the past two decades, China has moved up the value ladder to become the world's largest exporter of intermediate goods used to make final products. It has a one-third share of this global market, much higher than the country's share in most consumer sectors.

Such products now represent almost two-thirds of Chinese exports. The severity and uncertain duration of the Covid-19 shock have left overseas manufacturers with little ability to substitute inputs from other sources in the short run.

The fact that inbound transport links have also been disrupted is of less consequence: China has become less and less reliant over the years on foreign production inputs under Beijing's industrial policy of substituting imports with domestic production in strategic sectors.

Most foreign companies' plants have remained closed since the Lunar New Year holiday last month or are still not back to running at full capacity due to the disruptive impact of quarantines and transport restrictions on the companies' workers, suppliers and distributors.

This has further fractured supply chains that had already been buffeted by the past two years of special tariffs and retaliatory duties thrown up during the U.S.-China trade war, which forced companies to scramble for alternatives to mainland production sites.

Even before the trade war, Japanese, South Korean and Taiwanese companies had already begun to diversify their offshore production investment into Vietnam and other Southeast Asian nations, with such output in some cases overtaking that coming out from China, as with Samsung Electronics' mobile phones.

The problem that has now emerged is that Southeast Asian economies are themselves heavily dependent on China for production inputs. As a consequence, the strategy of moving value chains to Southeast Asia from China has had limited impact on companies' ultimate goal of reducing concentration risk. Every multinational must now be looking at how to reduce its dependence on China, as a production site or as a source of inputs, as soon as possible, whether through moving such purchasing and manufacturing back to its home market, to the markets of its customers or to third countries.

Implementing such wholesale change to supply chains is hard but necessary. Countries with sufficiently large supplies of available labor, adequate logistical capabilities and comparatively low dependence on China will be most attractive for new production sites. Mexico, Turkey and Eastern European nations are among those which should soon be busy entertaining visits from major multinationals.

The coronavirus is putting the well-established model for integrated supply chains of production to the test. China was allowed to become too important to multinationals even as it remained vulnerable to shocks like the U.S.-led trade war and now Covid-19.

While the coronavirus' impact on economic growth and inflation in China and other nations may be short-lived, the episode's impact on the operation of global value chains will be longer lasting. How isolated a production site is from China in terms of import dependence will help to determine if it receives substantial new foreign direct manufacturing investment.

The proximity and links to China that used to be an advantage have become liabilities. The most important structural consequence should be a much faster reshoring of the value chain away from its territory.