A man reads a newspaper at a vegetable market in Islamabad: most people believe that journalists are performing a valuable public service.   © Reuters
CopyCopied

W. Tariq is a journalist who has worked for Pakistan's mainstream English-language newspapers.

Pakistan's media is facing unprecedented challenges in terms of both financial viability and censorship, as the ruling Pakistan Tehreek-e-Insaf -- Movement for Justice -- government, which came to power in 2018 on promises of reform, tries to break the media status quo.

In the name of fighting corruption, Prime Minister Imran Khan has accused previous governments of awarding advertising contracts based on favoritism, and withheld payments worth billions of rupees for official advertisements already printed and aired. A drastic reduction in the overall volume of government advertising has forced media groups that rely heavily on state funding to cut jobs and salaries.

In October 2018, at a newspaper where I was working, many reporters were fired and the Islamabad bureau was shut. The paper's editor, clearly distressed by the publisher's decisions, contemplated quitting but said he was in no position to fight a deeply flawed system.

Government curbs on official advertising have widened the disparity between electronic and print media. Pakistan's electronic media regulator has issued 105 licenses for private satellite TV channels since it was formed in 2002, and a large chunk of their earnings come from corporate advertising.

Pakistan's nearly 350 print publications -- including those with an online presence -- largely depend on display and classified advertising from the government. There is also a huge gulf between the high salaries earned by television news anchors and the low wages for print and online journalists.

Yes, previous administrations have exploited print's dependence on state funds, with advertising contracts often awarded to government cronies, and in some cases the owners of "dummy" newspapers, with no actual readership, managed to win contracts.

But the current attempts to fix the system have created another set of problems, with many outlets accusing the government of acting at the behest of the powerful military to make journalists fall in line.

This has hurt credible journalism, with newspapers preferring to hire sub-editors who can churn out curated clickbait more attractive to online advertisers, while cutting back on investigative, long-form storytelling.

The ensuing financial pressure has led to self-censorship. Warned of the consequences, most newspapers have been unable to take an independent editorial line as "unofficial" government press advisories are sent to reporters, editors and news directors by WhatsApp messages or over the phone.

Other curbs on press freedoms include the Prevention of Electronic Crimes Act passed in 2016, which provides tough online content regulations clearly designed to tighten censorship.

Failure to comply can lead to questionable charges or being taken for "a trip to the northern areas" -- a euphemism for torture by Pakistan's security agencies. According to the Freedom Network, a local media watchdog, 27 journalists in Pakistan were arrested and charged in 2020, including eight under the cybercrime laws.

In September, journalist Bilal Farooqi was arrested in Karachi as a result of a "complaint" that he had ridiculed the country's armed forces in a tweet. He was released on bail a few hours later only after his colleagues protested on Twitter, showing that at least social media pressure can work, particularly in cases where the motive is just to intimidate. 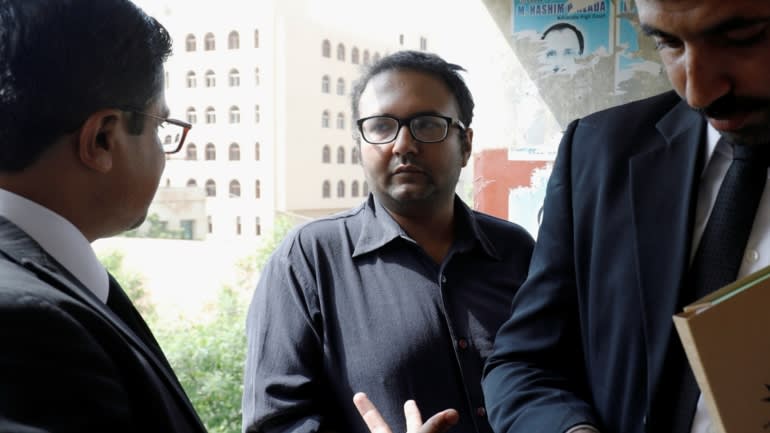 Bilal Farooqi, center, stands with lawyers before appearing for case proceedings at the district City Court in Karachi on Sept. 12, 2020.   © Reuters

That journalism and reporters in Pakistan are struggling, is unmistakable. According to the Pakistan Federal Union of Journalists, at least 7,500 journalists and associated media employees have lost their jobs over the last two years. While almost every organization has scaled back operations, more than two dozen publications including several respected magazines and two TV channels have closed.

As print declines, small-scale digital news portals such as Voicepk.net, The Current and Fact Focus are springing up. But most of them have yet to figure out the basics such as financial stability and winning credibility with readers.

As official constraints continue to undermine truth, impartiality and accountability in Pakistan's media, the broader international community must take notice to help prevent the slide into the authoritarianism of neighboring countries where free media is nonexistent.

Local initiatives such as the Pakistan Entrepreneurial Journalism Program launched by the Global Neighborhood for Media Innovation that focuses on creating financially sustainable journalism can also help ensure both the survival and independence of journalism in Pakistan. Reporters and editors also need to free themselves from the stranglehold of the seths -- media moguls -- who prefer making money to nurturing critical journalism.

Public opinion remains deeply divided about Pakistan's journalists. Some accuse them of pursuing a Western agenda and refer to them as lifafas -- those who are bribed to write favorable articles. But other people still believe that journalists are performing a valuable public service.

The authorities must stop differentiating between "good" and "bad" journalists, end the arbitrary approach in awarding state advertising, approve impending legislation for the protection of journalists, repeal cyber regulations that threaten online outlets, and encourage big media groups to improve the wages of print journalists.

The press must not be starved into submission or forced to engage in public relation exercises or artificially "positive" reporting. Instead, its goal should be to continue to educate and hold the powers that be to account.