Sudhir Thomas Vadaketh is the author of "Floating on a Malayan Breeze: Travels in Malaysia and Singapore." He is currently working on a book about China and India.

At first glance, the PAP, which has won every election since independence in 1965, the last in 2015 with a thumping 70% vote share, looks like a shoo-in. Singaporean voters are notoriously risk-averse even in the best of times.

Yet the government's perceived pandemic lapses, which have led to 44,000 confirmed cases, have reminded the electorate of some long-standing grievances which opposition parties, more competent and diverse than ever before, will seek to exploit.

In March, when Lee first floated the idea of early elections, not otherwise due till April 2021, Singapore was basking in the glory of having achieved a globally acclaimed coronavirus gold standard. That early performance seemed to vindicate the timing of the PAP's transition to a fourth-generation, or 4G, of leaders.

But by mid-April, Singapore was facing its worst humanitarian crisis since independence, with severe acute respiratory syndrome coronavirus 2, or SARS-CoV-2, spreading rapidly among thousands of South Asian migrant workers living in dormitories. Their plight has helped refocus attention on a number of domestic concerns, including Singapore's economic model, inequality and immigration.

From the time the British established a colonial trading base here in 1819, Singapore has been dependent on foreign capital and labor. Yet over the past two decades critics believe the PAP has fetishized gross domestic product growth, downplaying negative consequences such as higher living costs, worsening inequality and rising nativism alongside ethnic and class conflicts, which they see as having slowly eroded Singapore's social compact.

From 1999 to 2018, Singapore's population grew over 40% to 5.6 million, much through immigration. Native-born citizens are now well in the minority. During that period, average per capita incomes almost doubled but, like in other global cities, the gains have been disproportionately captured by the better-off.

In 2019 Singapore's Gini coefficient, a measure of inequality, was 0.398 after taxes and transfers. Though it has fallen from 0.44 in 2007, it is still higher than almost all OECD countries. Moreover, it would be much higher if Singapore did not conveniently leave out of the calculation almost 1 million low-wage workers.

While Singapore may one day wean itself off its dependence on cheap, imported laborers with few rights through, for instance, greater automation in its construction sector, the more politically contentious group is the almost 400,000 middle-class professional immigrants from around the world. They arrive on longer-term work visas and are perceived to be competing with citizens for white-collar jobs. 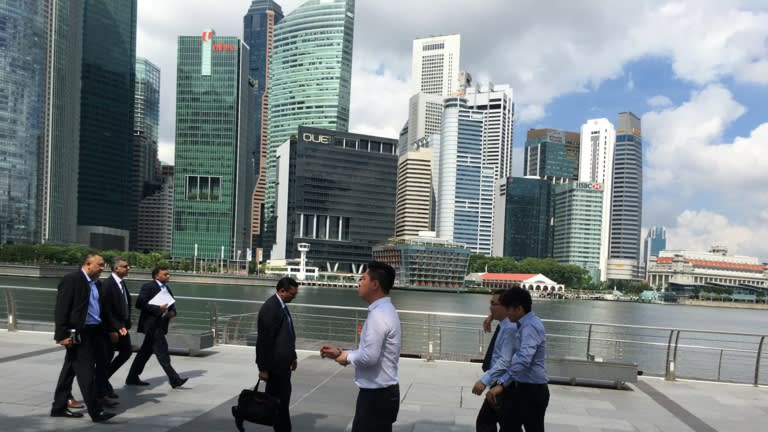 The defining political tension of our generation, at play in the election, is how to respond to this. The opposition has long sought to moderate capital and labor inflows and engage in greater redistribution as part of an embrace of more welfare, while the PAP, nervous about perceived economic competition from regional cities, believes that would sap some of Singapore's dynamism.

The fate of leases for Singapore's public housing, where over 80% of the population live, is another key issue. For decades the government promised, in the words of Lee Kuan Yew, Singapore's first prime minister after independence, that those property values "will never go down." Many assumed it would extend their 99-year leases, as has happened in other countries, or reacquire them at fair value.

But after Lee's death, the government confirmed that the properties, some valued at over $700,000, will be worthless when their leases end -- at which point it can redevelop the land. This apparent policy flip-flop has already affected prices, and with some families' nest eggs in terminal decline, opposition parties are coming armed with alternative housing proposals.

Some voters are concerned about substantive questions around elite governance and democratic discourse. There is a sense that the dormitory crisis is partly a symptom of groupthink and other biases prevalent among an insulated group unaccustomed to listening to a more diverse body politic.

The PAP is trying hard to shrug off its reputation as a party of scholars and generals while the opposition seems unsure about whether to compete by relying on its credentials or by proffering unconventional candidates.

For the first time in decades the PAP is facing a challenge from one of its own former politicians. Tan Cheng Bock's trademark cry is that the PAP has lost its way, and his Progress Singapore Party's most prominent new member is Lee Hsien Yang, the prime minister's estranged younger brother.

While the Singapore Democratic Party should also perform decently, the real opposition threat will likely come from the only party which actually has seats in parliament, the Workers' Party, or WP.

The PAP could conceivably improve on its 2015 showing, where it took 83 out of 89 elected seats, and recapture all six WP elected seats in the new, slightly enlarged parliament. Still, few would be surprised if the opposition made inroads, perhaps winning more seats, a result that would be interpreted as disappointment in both Lee and the incoming 4G team.

An adage here is that "in most democracies one knows the election date but not the outcome; in Singapore one knows the outcome, but not the date." This year, some Singaporeans correctly identified the mid-July polling date weeks in advance. They must now be also wondering if, for the first time in history, the outcome is actually in doubt.