Coronavirus hit means Australia is about to run out of luck

No developed nation has beaten the odds for the past three decades better than Australia. Its recession-free run has confounded economic gravity and the naysayers.

But the coronavirus shock upending everything is fast bringing Australia back to earth. Economists forecast that gross domestic product will contract in 2020, prompting the government to roll out a record stimulus package. Rating agency S&P Global is hinting that Canberra's days of AAA credit many be numbered.

How bad might things get as the Lucky Country runs out of good fortune?

Australia is hardly alone in hitting a COVID-19 wall. Officials from Tokyo to Berlin to Washington are scrambling to put a floor under rapidly slowing growth rates.

What makes Australia particularly unlucky, though, is that three long-neglected bubbles are suddenly deflating: China, runaway housing prices and political hubris. And so far, Prime Minister Scott Morrison's steps to stabilize growth including a $80 billion rescue plan strike many as inadequate to the challenge.

Nearly a third of Australia's exports go to China, and that exposure is amplified by indirect links to mainland demand for Australia's iron ore, coal, copper, gold, liquefied natural gas, wine, beef, lamb and other goods. Heady Chinese growth fuels service sectors in western cities like Perth, Brisbane in the northeast and Darwin in the Northern Territory.

Construction companies, hotels, restaurants, retailers and consultancies rely on ships heading to China. Mainlanders, meantime, account for 15% of Australia's tourism and nearly 40% of its foreign students. 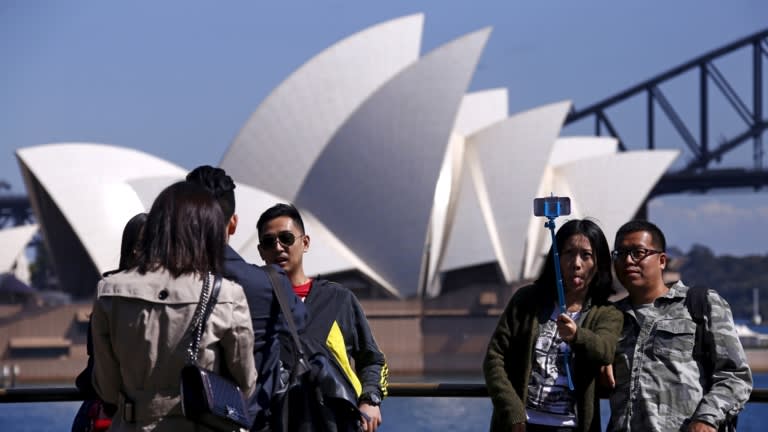 As of December, household debt was nearly 125% of gross domestic product. Among developed nations, only Switzerland's ratio is higher.

Real estate continued to soar despite the U.S.-China trade war, in part thanks to mainland buyers. In the last quarter of 2019, average home prices rose 4%, the biggest jump in a decade. Now economists worry the COVID-19 fallout could send those prices tumbling 20%. That puts the nation's biggest banks at risk if defaults rocket.

That would surely complicate the hubris afflicting virtually every government of the last two decades. China's boom blinded Canberra to the urgent need to increase competitiveness and productivity. Why irk vested interests when you can just ship ever-growing volumes of commodities to China?

This strategy worked brilliantly during the 2008-09 global financial crisis. Canberra did then add stimulus equivalent to about 1.8% of GDP, but governments mostly rode China's coattails. China's 8.7% growth in 2009 gave Canberra nice returns on this bet. As most peers fell into recession, Australia grew 2.1% that year.

It came at a high cost: complacency. Government after government claimed to be upgrading and diversifying the drivers of growth while pursuing a China-only strategy. That has been largely true of Morrison, who took power in August 2018. Last week's $80 billion stimulus announcement appears to assume China can pull off another 2008 this year.

It is a record-breaking fiscal maneuver, one that will subsidize roughly 70% of workers' pay relative to median wages, and it sounds grand to hear Treasurer Josh Frydenberg assure Australians that "we will do whatever is necessary to ensure our nation gets to the other side of this coronavirus pandemic."

Yet Stephen Koukoulas of Market Economics speaks for many in calling the rescue "stingy" and "slow." The former Treasury adviser reckons that a quarter of the workforce and the residential rental market are already at "a point of dislocation." Koukoulas sees it as a "garden hose fighting a brushfire" and counsels a response "double or triple" what Canberra is doling out.

At 3.3% of GDP this year, Australia's spending spree is a fraction of the 20% jolt Tokyo is unleashing. Even if the ratio rises to 6.1% in the next budget year, it is still half the 12% of GDP Singapore is deploying.

Nor does Morrison's team have anything concrete to say about weaning Australia off its addiction to China. Morrison could buttress business confidence with tax tweaks aimed at creating a more vibrant startup scene, incentivizing domestic innovation and improving infrastructure.

Here, it is worth recalling what Donald Horne was really getting at in his 1964 book The Lucky Country. He meant the title sardonically. Australia's good fortune to enjoy such a bevy of underground treasures, he argued, is no match for "second-rate people" managing that resource wealth.

It is up to Australian voters to decide where Morrison stands on the leader-rating scale. But Canberra's coveted AAA status is now in play as S&P downgrades its outlook to negative. Australia's leaders are free to take their chances on China's economy roaring back to life in short order. They are likely to have no such luck.