Coronavirus is no excuse for companies to ignore Uighur exploitation Muslim trainees work in a garment factory at the Hotan Vocational Education and Training Center in Xinjiang: the scale of abuse should not be downplayed.   © CCTV/AP
CopyCopied

Bradley Jardine is a Schwarzman fellow at the Wilson Center's Kissinger Institute on China and the United States.

In late April, Reuters revealed that e-commerce giant Amazon had recruited Dahua Technology, a video technology manufacturer recently blacklisted by the U.S. government, to supply thermal equipment for its warehouses. Amazon bought around 1,500 video cameras to monitor the temperature of staff on its premises.

Dahua had been blacklisted for its alleged involvement in repressing, detaining and surveilling China's Turkic minorities -- Uighurs, Kazakhs and Kyrgyz -- at least a million of whom have been moved to "re-education" camps in the Xinjiang region. (Dahua did not respond to a request for comment.)

By enlisting controversial suppliers in the fight against COVID-19, American companies run the risk of ignoring human rights abuse and emboldening Beijing. Even in the midst of a crisis, the international community must remain firm in its commitment to maintaining ethical supply chains.

COVID-19 has infected over 1.6 million Americans, put millions more out of work and looks set to claim well over 100,000 lives. Other countries across the West, including Britain, Spain and Italy, are not faring much better. 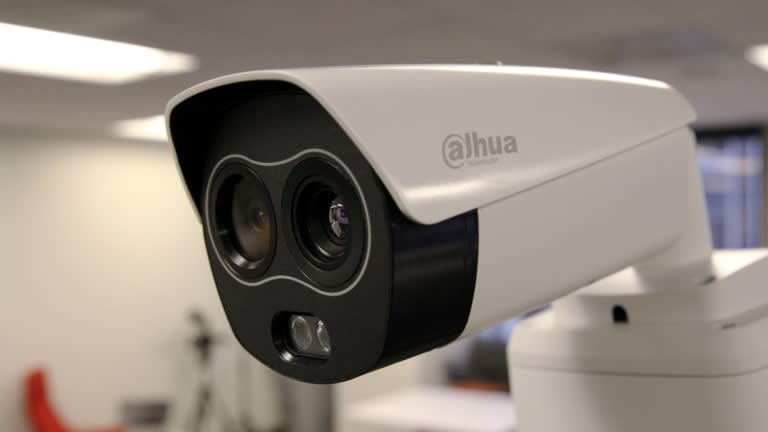 A Dahua Technology thermal imaging camera is seen during a demonstration at an office in San Francisco on Apr. 24.   © Reuters

Faced with such catastrophe, politicians counter that they must take whatever steps necessary to protect their citizens. But the scale of abuse in Xinjiang should not be downplayed. It is the largest internment of minorities since the Second World War.

There have been other recent examples of controversial supply chains thanks to fast-track policies to combat the pandemic. In April, the U.S. Food and Drug Administration announced it would authorize Chinese company BYD to supply N95-grade equivalent respirator masks to the U.S.

The state of California then signed a $1 billion deal with the company for 150 million masks, plus an additional 50 million surgical masks each month, despite the company having no prior experience producing such equipment. The company's Chinese factories even failed their initial on-site assessment by America's National Institute for Occupational Safety and Health, the organization tasked with certifying masks, leading BYD to offer California a $247.5 million refund on the deal in exchange for a contract extension.

What is less widely known, however, is that one of BYD's key suppliers is Hubei Yihong Precision Manufacturing, a company alleged to employ forced Uighur labor as part of the Xinjiang regional government's "re-education" program. (BYD said: "BYD has always adhered to and strictly complied with relevant laws and regulations of the countries/regions in which its businesses operate. BYD holds a zero-tolerance policy toward suppliers that are not in compliance.")

Hubei Yihong was identified in a recent report by the Australian Strategic Policy Institute as one of 83 companies using coerced minority labor from Xinjiang in its supply chain, alongside global brands such as Apple, Nike and General Motors. (Hubei Yihong did not respond to a request for comment.)

Making supply-chain issues more complicated is the fact that an estimated 80,000 people from minorities are being dispatched outside of Xinjiang to work in factories across the country, a new phase in the so-called re-education campaign. Workers are put in segregated dorms and forced to undergo "ideological training" -- in other words, brainwashing -- outside working hours as yet another facet in the Chinese Communist Party's drive to re-engineer Xinjiang's cultural identity.

Reporting by the South China Morning Post this month suggests this phase is advancing at a growing rate, with tech hub Shenzhen alone expected to resettle 50,000 such laborers under government-mandated quotas.

While China's government is rightly condemned for its initial cover-up of the COVID-19 outbreak in Wuhan, which placed the country and the world at large at grave risk, its reckless use of Uighur labor during the crisis has been critically overlooked.

When the country entered lockdown during COVID-19's initial spread, ethnic minorities were reportedly dispatched to factories as a form of compensation for the decline in productivity during the shutdown. Such workers are ideal in these circumstances, with no rights and no power to challenge the authorities and no accountability mechanisms against the employing companies should they grow sick or die.

Governments around the world must punish Chinese officials and companies responsible for Xinjiang's abusive surveillance regime with sanctions, travel restrictions and blacklists if they are to push Beijing toward ratifying and enforcing international treaties outlawing coerced labor.

On May 27, the U.S. House of Representatives voted overwhelmingly to pass the Uyghur Human Rights Policy Act, legislation that will allow Washington to sanction Chinese government officials responsible for human rights abuses in Xinjiang, sending it to the White House for final approval.

Ordinary citizens should also boycott companies allegedly profiteering from atrocities in Xinjiang and their officials should face consequences for signing any deals that rely on such unethical supply chains.

Far from a humanitarian sideshow, the ongoing repression in Xinjiang is one of the gravest moral failings of the international community today. China must be held to account.