Fans use matches to score political points against regional rivals

South Asia is one of the world's most divided and least integrated regions. Its eight countries -- from Afghanistan in the north to the Maldives in the south -- suffer from an abysmally low volume of trade, poor connectivity, bitter border tensions and violent religious extremism.

But an even more vivid measure of the mutual suspicion and hatred which tear South Asia apart is offered by the one sport which has a fervent mass following there -- cricket.

The twelfth edition of the men's cricket world cup tournament, which features the national teams of Afghanistan, Bangladesh, India, Pakistan and Sri Lanka, alongside five more countries, is being played far away in England, but it has unleashed political passions in South Asia.

The most anticipated clash of competing nationalisms was between fans of India and Pakistan. Even though the players of the two teams get along and have displayed goodwill, there was an explosion of emotions from fans during the teams' encounter in Manchester on June 16.

News media in both countries hyped the game as a contest of national prestige and one-upmanship. The pressure to perform or perish was captured by Pakistani prime minister and former cricket captain Imran Khan's tweet on the eve of the match that the Pakistani team must "banish all fear of losing" and "fight till the last ball" while not forgetting that it was carrying the "nation's prayers" with it.

Following the match, which India won, Pakistani fans cried their hearts out and lambasted their team for failure in full media glare while Indian supporters celebrated as if it were a festival.

The unique edginess between India and Pakistan in cricket reflects political conflicts over Kashmir and jihadist terrorism. In the wake of recent military skirmishes between the two countries, the intensity around their cricket matches has risen.

In this world cup, the sense of epic enmity has transcended India-Pakistan games and spilled over into an interlinked and wider set of regional animosities.

On June 29, when the teams of Afghanistan and Pakistan squared off in Leeds, mysterious aircraft flew over the stadium with giant political banners reading "Help End Disappearances in Pakistan" and "Justice for Balochistan" -- a reference to the Pakistani army's harsh counter-insurgency tactics in its western province.

The Pakistani government alleges Baloch nationalists are being clandestinely encouraged by the government of India to fight for secession.

Brawls broke out between fans of Afghanistan and Pakistan that day outside the cricket ground, grabbing headlines. The resentment that Afghans nurse toward Pakistanis for sponsorship of the Taliban was also on display inside the stadium, with the former holding posters such as "Neighbor, send us your players not bombers."

On social media, large numbers of Afghans and Bangladeshis cheered for the Indian team and dissed Pakistan, giving vent to their respective likes and dislikes which stem from decades of political beliefs and attitudes.

On July 11, during the semifinal between Australia and England in Birmingham, another political banner saying "World must speak up for Balochistan" was flown by unknown aircraft over the stadium. 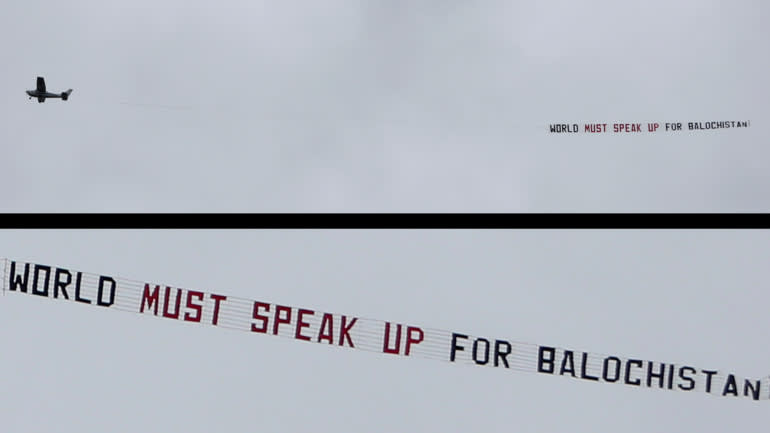 An aircraft tows a banner that reads "World must speak up for Balochistan."   © AP

Not to be outdone by the anti-Pakistan memes and propaganda, there were also anti-India manifestations and outbursts during the world cup. In a tit-for-tat move, private aircraft flew over the Leeds cricket stadium during the India versus Sri Lanka game on July 6 with the banners "Justice for Kashmir," a region disputed by India and Pakistan, and "India stop genocide, free Kashmir."

To the chagrin of the tournament organizers, the apolitical International Cricket Council, much focus on and off the field in this world cup has been on raw nationalism. Some of it may be the handiwork of state agencies and not just free expression of overloaded patriotism by fans.

But apart from nationalism derived from the current state of foreign relations among South Asian countries, a pervasive phenomenon during the world cup has been the surge in subnational identity expression.

A video showing a Sikh man waving the Pakistani flag and chanting for a separate Khalistan or independent country for India's Sikh minority during a New Zealand versus Pakistan game in Birmingham on June 26 went viral in Pakistani social media.

The frustrations of Sri Lanka's small Muslim minority community, especially following the Easter Sunday bombings and religious persecution in the island nation, were also visible, with most of them rooting for the Pakistani team against Sri Lanka, presumably because Pakistan was formed as a homeland for the subcontinent's Muslims at the end of British rule.

The men's cricket world cup, which has been played on national lines since 1975, was always a barometer of "who hates whom" in South Asia. But in the social media age, this premier tournament has become even more politicized by fans and interested parties to extract global publicity and pursue psychological warfare.

With hundreds of millions glued to their television sets and online streaming services during live coverage, taking a dig at countries or communities one dislikes while glorifying those one sympathizes with has a clickable real-time appeal. The first two weeks had a viewership of 183 million in India alone, research from the Broadcast Audience Research Council of India found.

Notwithstanding innovative formats like the Indian Premier League, where mixed club teams have players drawn from multiple countries, the core national and subnational loyalties which drive cricket, particularly in multinational tournaments like the world cup, remain dominant.

Detached observers have decried the jingoism and politicization of cricket as harmful to the spirit of what the British used to call a "gentleman's game." To them, cricket is just a pastime which should be played with sportsmanship.

India's cricket captain, Virat Kohli, even said on the eve of the match against Pakistan that the players "can't get too emotional or too overexcited." But he nodded to the bigger reality and the grand political theater provided by the world cup: "I can't tell the fans to think of the game in a particular manner."

South Asians live and die by their cricket affiliations. They vent their feelings and longings through cricket, which is why it is the people's game. The wars on and off the pitch will go on.

Sreeram Chaulia is a professor and dean at the Jindal School of International Affairs in Sonipat, India. His forthcoming book is "Trumped: Emerging Powers in a Post-American World"