Defend the rupee -- or sink into debt A weaker rupee will hurt India as a whole more than it benefits the country's exporters.   © Reuters
CopyCopied

The Indian rupee has weakened by roughly 9% against the U.S. dollar since January and is now the worst-performing Asian currency this year.

Given the country's declining foreign exchange reserves, sluggish exports, increased overseas commercial borrowings and a hawkish U.S. Federal Reserve, the pressure on the rupee is likely to continue.

The Reserve Bank of India, the central bank, must intervene and defend the currency. Otherwise there could be serious damage to the economy, especially to companies that have borrowed heavily overseas.

Many argue that the RBI should let the rupee weaken further as a depreciating currency will help exports, especially in apparel, footwear, information technology and pharmaceuticals.

But this claim is seriously flawed. While some exporters would benefit, the country as a whole would not as it is a net importer.

Meanwhile, a weaker rupee would make things really difficult for companies with unhedged forex exposures. Roughly 40% of the overall forex exposure of Indian companies remains unhedged, according to the RBI.

The RBI, therefore, must check further slides in the rupee to help heavily leveraged companies and fend off the threat to macroeconomic stability represented by a rising trade deficit and the effects of higher oil prices. 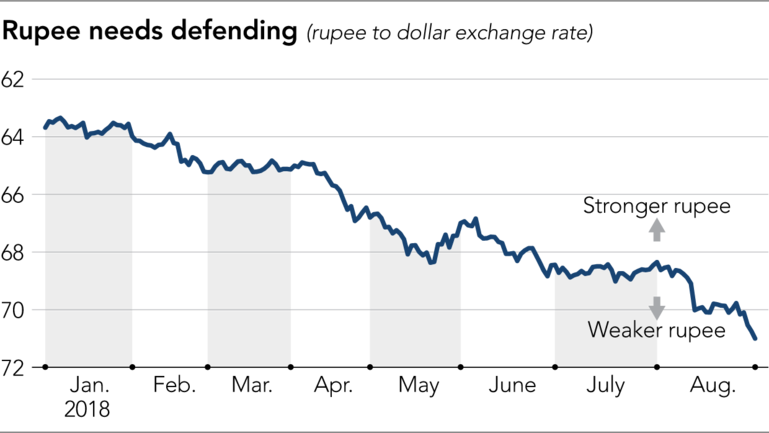 The ratio of India's external debt to gross domestic product is not in itself a concern standing at 20.5% at the end of March, compared with 20% a year before. But the large share of commercial lending is a worry because it has increased the exposure of Indian companies, including smaller businesses, to fluctuations in interest and exchange rates.

As of now there has been one large-scale default -- Reliance Communications, part of Anil Ambani's business grouping, which defaulted on its interest payments on $300 million in November 2017 as it wrestled to service debts totaling over $6 billion. It has since been selling assets and negotiating with creditors.

However, that does not mean there will not be similar cases in future given the stressed balance sheets of large Indian corporates which have borrowed heavily in overseas debt markets.

Meanwhile, a weakening of the rupee hits the domestic financial markets by potentially saddling foreign investors with foreign exchange losses and prompting some fund managers to sell out. If the currency loses any more in value, it could hit the mood in the stock market.

India's forex reserves have declined to $400 billion -- that is sufficient to pay for nine months of its import bills. Meanwhile, India's current-account deficit is on the rise and expected to be around 2.7% of GDP in the current financial year to March, putting further pressure on the reserves, especially as inflows of foreign direct investment are stagnating while foreign financial investors are getting nervous, amid a global sell-off in emerging markets.

Indian companies which rely on imports for their supplies or on foreign credit and depend on the domestic market for sales will be hit hard -- for instance, oil marketing companies, thermal power producers, telecom and infrastructure companies or metals groups which either rely on imported inputs or have foreign currency-denominated debts. Other losers from a decline of the rupee are Indian airlines such as Jet Airways or Indigo as 60-70% of their costs are dollar-denominated.

The beneficiaries of a weaker currency include steel companies which are already enjoying the help of import duty hikes and will get extra protection from cheap imports.

Companies in net exporting sectors such as information technology, pharmaceutical, apparel and footwear will generally benefit, but the benefit will not be uniform and depend on whether they have hedged their forex exposure and on what proportion of their sales comes from the domestic market.

India as a country imports more than it exports. A weakening rupee will jack up the rupee cost of the country's net import bill, fuel inflation and add to the fiscal deficit.

India's merchandise exports have been hovering around $300 billion for six years or so even though the rupee has lost 20% of its value against the dollar in this period. So, letting the rupee fall further to 75 to a dollar from around 70 as many are suggesting, won't address India's export woes.

Indian exports have a narrow base and, to make matters worse, focus on low-value contract manufacturing (rather than high-margin retailing or high value-added work such as R&D or design). A Commonwealth Secretariat study found Indian companies in low-cost manufacturing sectors, including textiles and leather goods, capture less than 10% of the retail prices of their products.

Recent research shows that India's export basket as a whole has become more income-elastic than price-elastic. Thus, improved global economic growth has more impact in lifting India's exports than boosting competitiveness through currency depreciation. But right now, unfortunately for India, even though global growth prospects have improved, the import barriers are going up. Also, the currencies of competing exporters -- such as Indonesia -- have also depreciated, eroding most of India's gains from the weakening of the rupee.

Therefore, it makes sense for the RBI to check further slides in the rupee. It can support the currency in the forex market by selling dollars or raising domestic interest rates. Or it can make institutional changes such as establishing a proposed fund aimed at encouraging NRIs to invest hard currency in India.

The central bank must not be passive or halfhearted in defending the rupee.