Rodrigo Duterte, pictured on Mar. 5: there are ways in which the president could continue steering the nation. (Handout photo from Presidential Communications Operations Office)
CopyCopied

President Rodrigo Duterte's boosters seem to have settled on a plan to make the Philippine economy great again: more Duterte.

Allies of the strongman leader are hitting the airwaves urging him to run for vice president in 2022. Constitutionally, Duterte, 75, is limited to a single six-year term. Loyalists want Duterte to shoot for the No. 2 job so he can, as some in his PDP-Laban party put it, "continue reforms and keep the economy on track."

This is not Adam Smith, though, but Vladimir Putin. In 2008, the Russian leader pivoted to the No. 2 job for a time, before returning to the presidency. Duterte's supporters would have to amend the constitution to pull a similar maneuver, and they are certainly capable.

But there are ways in which Duterte could continue steering the nation as VP. His daughter, for example, is among the most-talked-about candidates in next year's elections. Sara Duterte currently has daddy's old job: the mayor of the southern city of Davao.

Granted, it is easy to become numb to the idea of democratic leaders going to ridiculous lengths to retain power. Case in point: the failed Jan. 6 effort to keep U.S. President Donald Trump in the White House.

Pundits can debate whether Duterte is the Trump of East Asia, or if Trump was riffing off Duterte neutering institutions that might check his worst impulses. What is hard to debate, though, is how much the Duterte years are setting back an economy that had been surging in the right direction.

To be sure, polls suggest Duterte is wildly popular. One Pulse Asia poll late last year had his approval at a Putin-beating 91%. That is despite a deadly drug war drawing global scorn and a botched response to COVID-19.

Yet here are three data points reminding us why the Philippines does not need more Dutertenomics.

One: Worsening corruption. The source of Duterte's folk-hero status was 22 years calling the shots in Davao. The city claimed lower crime rates, faster growth and greater efficiency than other top municipalities. In 2016, voters hired Duterte to use those skills to supersize the reforms of predecessor President Benigno Aquino.

Instead, Manila has fallen steadily on global league tables. Within a few years of Aquino's good-governance reforms beginning in 2010, the Philippines scored its first-ever investment-grade ratings. By 2015, Manila had a 95th-place ranking in Transparency International's corruption perceptions index, a galaxy away from the 139th spot Aquino inherited.

On Duterte's watch, the Philippines fell back to 115th, putting it behind Macedonia and Mongolia. One reason: he put the speed of infrastructure projects ahead of accountability and sustainability. Investors worry about fresh explosions of public debt and the graft that often follows.

Two: The view from the Heritage Foundation. Granted, what a Washington think tank says will matter little to Duterte cronies. But considering how governments in Hong Kong and Singapore obsess over Heritage's Good-Housekeeping seal of approval, this downgrade hurts.

In 2021, the Philippines fell to 73rd on its Index of Economic Freedom. Not an epic fall from the 70th-place ranking in 2016. But the reasons cited for Manila's backsliding were things that were supposed to be Duterte's strong suit: an overly bureaucratic regulatory system and chronic corruption.

At the same time, Heritage complains that "there is little accountability for powerful politicians, big companies, or wealthy families." Odd for a man who pledged to destroy the national elites. Instead, he replaced the established oligarchs with his own. Duterte's assault on press freedom makes it harder for the media to police an economy growing more opaque.

Three: Inflation that tells a bigger story. When loyalists in the PDP-Laban party argue that Duterte retaining power will "expeditiously and effectively deliver our people, our communities, our economy, back to good health," they are thinking of top-line gross domestic product rates. The government expects growth to bounce back to 7.4% this year.

Yet inflation might surge, too, and not for the reasons unnerving bond traders in the U.S. There, price pressures stem from ultralow interest rates, what economists call demand-pull inflation. Manila's troubles are of the cost-push variety. They stem from bad infrastructure, inefficiencies at ports, poor refrigeration facilities and old-fashioned graft. 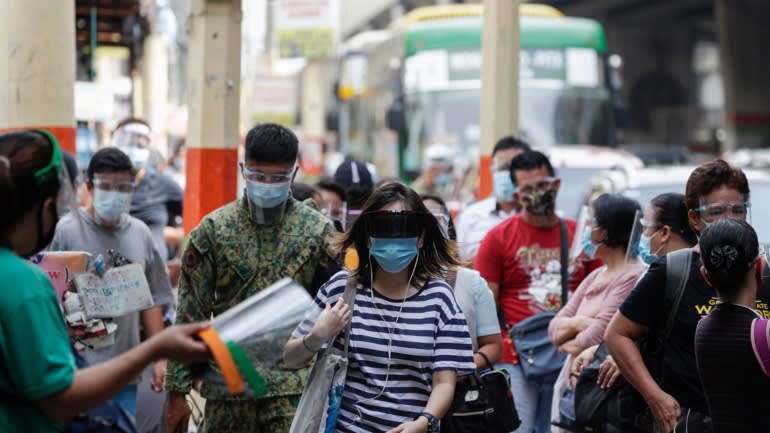 People walk along the streets in Quezon city: Manila's troubles are price pressures of the cost-push variety.   © AP

The sources of the 5%-plus inflation many fear are all areas that Duterte was elected to tackle. Instead, his war of choice against the drug trade, one slamming Manila's global soft power, took precedence over economic retooling.

Hints of Duterte staying in power may sound familiar to longtime political wags. In the mid-2000s, Aquino's predecessor Gloria Arroyo urged a shift to a parliamentary government. Many saw it as a ploy to stay in the Presidential Palace.

In 2014, Aquino sparked outrage, hinting at constitutional changes so he could serve a second term. Making the mere suggestion all the more surreal: it was the 1986-1992 presidency of his mother, Corazon Aquino, that ended 20 years of brutal dictatorship under Ferdinand Marcos. Wisely, Benigno Aquino left office as planned in 2016.

But as 2022 beckons, Ferdinand Marcos Jr. is expected to make run at the presidency. The specter of another Marcos regime in tandem with Duterte 2.0 does not seem compatible with investment-grade ratings. Other presidential possibilities include Duterte's daughter and boxing legend Manny Pacquiao, now a senator and PDP-Laban's acting president.

At least one thing is clear: the 417 days leading up to the election will be an event-rich one for economists and investors wondering if Dutertenomics lives on. I, for one, hope not.