Revival of 'red-tagging' has set the country back decades Students protest in Quezon City on Jan. 19 after the Defense Ministry cancels a longtime pact that hindered police and soldiers from entering the grounds of the University of the Philippines.   © Reuters
CopyCopied

As the authoritarian regime of President Ferdinand Marcos entered the 1980s, a small group of young officers belonging to the then Philippine Constabulary's intelligence unit reached the conclusion that suppressing student activism had pushed many to join the underground Communist Party.

Their job of ending the insurgency was not going anywhere. And eventually, this group of officers began plotting a coup that indirectly fueled a popular revolt that eventually toppled the Marcos regime.

Martial law and insurgency had also taken a toll on the country's best and brightest. Student leaders were killed, jailed, and tortured, while the apolitical migrated to the United States. The nation lost a generation that could have continued the building of a nascent Philippines that their elders had begun shortly after the end of World War II.

But the social ferment in the Philippines that led to martial law in the early 1970s is now being forgotten and twisted to suit the needs of current President Rodrigo Duterte.

Today, the Philippines is being pushed to repeat its ugly past with Defense Secretary Delfin Lorenzana this week unilaterally breaking a decades-old agreement disallowing the military and the police from entering the campus of the University of the Philippines, or UP, which was the epicenter of political activism during the Marcos era, and continues to be so today.

Claiming that UP had become a recruitment ground for students to join the Communist Party, Lorenzana defended his actions as part of the military's mandate to protect youth from falling under the influence of what Duterte's government has tagged as a terrorist organization.

Although Lorenzana promised that the military would respect the university's coveted academic freedom, no one believes him. The letter was seen as just one more part of the government's ongoing red-tagging campaign to crush a political insurgency. While the pushback spread all over the internet, one has to ask why the military was willing to get into a mire similar to what it got itself into under Marcos. 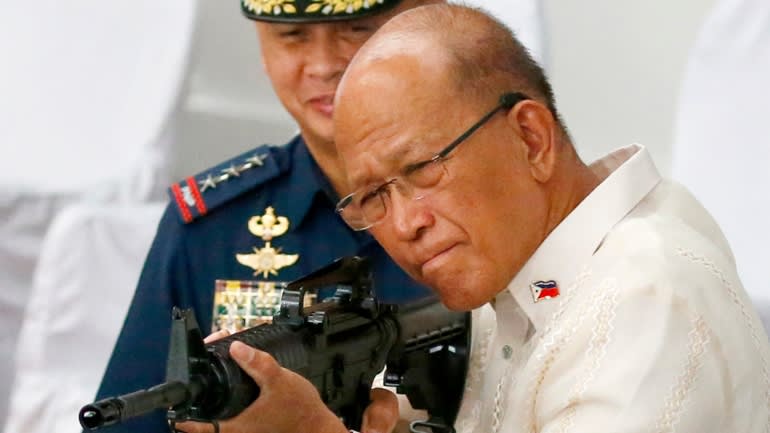 Defense Secretary Delfin Lorenzana inspects an assault rifle: No one believes his promise that the military will respect academic freedom at the University of the Philippines.   © AP

The answer could be as simple as a lack of imagination. Today's military leaders do not possess the same acumen of their predecessors, officers with minds as brilliant as their communist foes. Instead, the military has gotten used to a comfortable arrangement of not rocking the boat. Oblivious to the painful days of Marcos's iron-fisted rule, the military's fledgling promises of upholding freedom have been undermined by systemic problems and have only served to reinforce its stupor.

The years of building democracy have been trying ones for an officer corps that had scored victories against the communists, only to see many of those captured communist leaders released as part of the on-again, off-again peace negotiations of the past three decades. In recent years the military has been updating its "win the war" strategy, but it has delivered too little.

Now, the Armed Forces of the Philippines has in the populist figure of President Duterte a commander in chief who not only admired Marcos' authoritarianism but thinks that style of leadership could help him get things done without the encumbrances of public debates or political opposition.

Red-tagging is easy and quick. Never mind that it sets the country back decades to its own McCarthyite era. The main UP campus in Quezon City is a target in plain sight; in fact, it is just less than 10 kilometers away from the camp of the armed forces headquarters where the mutiny against Marcos started in 1986. On Sundays, it turns into a park where people are finally allowed to take strolls to help relieve the stress of the pandemic lockdowns.

The truth though is that one would likely find more generals in the army than communist firebrands on campus. The romance of a communist utopia in the Philippines is long over: the university has had its share of fascists -- Marcos was one -- capitalists and dreamers, but the Communist Party has split so badly they probably hate each other more than anyone else. If the crop of officers planning the current agenda had one ounce of creativity, they would turn the pages of history -- and read, think, and examine what happened.

Fifty years ago, before Marcos declared martial law, students had closed the campus, and declared that they had established a commune similar to what French activists had done on the Left Bank in Paris. It was soon dismantled by the police, which the students regarded as yet more evidence of Marcos's authoritarian bent. They were right. Martial law broke the soul of student idealism. Nothing of that fervor has ever again taken root, but the university did manage to preserve its academic freedom.

In the revolt of 1986, the army mutineers were backed by the "middle forces," people from all walks of life who were willing to lend a hand to the military. They had also supported the underground movement -- even though they were not communists -- for the singular goal of driving Marcos out of power.

For those armed forces officers of long ago, being called the "puppet of Marcos" pained and rankled them. When the entire military institution they served was attached to Marcos, they saw the honor of their uniform tarnished.

It has taken decades of factionalism, coup attempts and political scandals for military officers to remove the skin that a dictator had clothed them in. Secretary Lorenzana, who was a young army officer in the tumultuous 1970s, should remember that.