Duterte's COVID blunders will set the Philippines back generations Addressing the United Nations General Assembly last year, Philippine President Rodrigo Duterte lamented the scandalously inequitable distribution of the first batch of COVID-19 vaccines, where rich nations have reportedly gobbled up as much as 80% of available approved vaccines.

The European Union, along with the Group of Seven industrialized nations have quickly secured up to 3.1 billion doses, initially leaving only 2% of available vaccines for the Covax Facility, the universal vaccination initiative led by the World Health Organization intended to supply developing nations. That left the rest of the world's population fighting for the remaining 18% of vaccines still up for grabs.

Without a doubt, the COVID pandemic has painfully laid bare structural inequities in our global health infrastructure: Indigent communities and racial minorities in the developed world, as well as a majority of people in the world's poorest nations, have borne the brunt of the crisis.

But what developing country leaders such as Duterte have conveniently overlooked is the vital importance of proactive leadership in times of crisis. By foolishly shunning Western pharmaceutical companies until the last minute and naively over-relying on vaccines from the likes of China and Russia, Duterte has left the Philippines without quality vaccines until mid-2021.

Asleep at the wheel, Duterte has effectively extended the public health crisis that has ravaged the Philippine economy, as neighboring countries have set about not only developing their own vaccines but securing large doses from abroad. To be fair, the pandemic crisis is unprecedented in living memory, and nor is Duterte to blame for the decades of underinvestment, corruption, chronic brain drain and emaciated health care system he faced when he was sworn in.

And Duterte has encouraged people to wear face masks and enforced strict social distancing measures throughout much of the year. Still, it is hard to understate his disastrous management of the COVID crisis.

Instead of ensuring competence and accountability in vital state institutions, Duterte appointed half a dozen active and former generals to oversee the country's public health policy, and it was not until mid-March that he started to take the crisis seriously. Then he pivoted to the other extreme, imposing the longest and strictest lockdown on earth, with my own Manila neighborhood ringed by military checkpoints.

But any gains from the lockdown were lost thanks to sloppy contact tracing and delayed mass testing that resulted in one of the worst COVID outbreaks in Asia. The lockdown also triggered the country's worst economic performance on record, with the Philippines' gross domestic product expected to shrink by as much as 10% this year, the worst in the region and a dramatic fall from almost 6% growth last year.

According to the International Monetary Fund, the Philippines could suffer the worst growth decline in the world over the next five years, while the British medical journal The Lancet placed the Philippines in the bottom third of surveyed nations in terms of its management of the COVID. 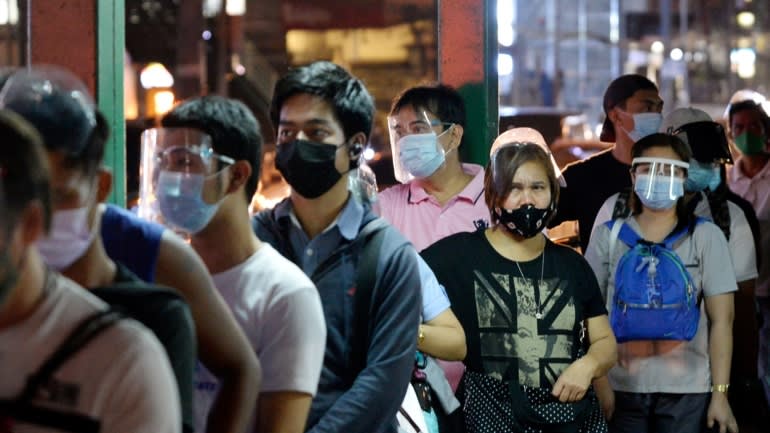 People queue at a bus stop in Quezon City, Metro Manila, on Dec. 23: Duterte has left the Philippines without quality vaccines until mid-2021.   © Reuters

In response, Duterte insisted that vaccines are on the way and that the country "will be back to normal" by December, while refusing to relax economically devastating lockdowns. Betting his hopes on two sources, China and Russia, when Moscow announced that its Sputnik vaccine, which is yet to clear third-phase human trials, Duterte even offered himself and his country as laboratory specimens. And despite lingering doubts over the reliability of Chinese vaccines, Duterte presented the Asian powerhouse as a savior.

"Those of you who are asking [if vaccines by] China [are safe]: I can say that China is a modern country and it has all the wherewithal... [its] integrity is fully protected by its achievements," said Duterte in a national address in October.

Curiously, the Filipino president, in contrast to neighboring Indonesia, overlooked the development of joint production schemes of COVID-19 vaccines with either China or Russia. He also failed to secure early supplies from Chinese companies, which have moved toward mass vaccination throughout the Middle East and aim to export up to 500 million doses in coming months.

Duterte's biggest vaccine blunder, however, was his stubborn refusal to secure effective vaccines from established pharmaceutical companies such as Pfizer through so-called Advance Market Commitments mechanisms.

"You want us to make a reservation by depositing money, you must be crazy," complained the Filipino president in September, just as major pharmaceutical companies moved toward regulatory approval. When Duterte tried to backtrack, Pfizer was already celebrating its astonishing trial results and had sealed massive supply deals with major nations.

The Philippines was only able to secure 2.6m doses of AstraZeneca vaccines for delivery likely in mid-2021 thanks to proactive members of the business community. But this will not be nearly enough to supply a population of 100 million, especially since 70% of a population needs to be vaccinated before herd immunity advantages can kick in.

According to Duterte's vaccine czar, former military general Carlito Galvez, it might take up to five years before the Philippines vaccinates a majority of its population.

As a result of Duterte's chronic mismanagement, his country not only faces dire economic and public heath crises for the foreseeable future but will remain increasingly dependent on covetous powers such as China, which will surely extract maximum concessions from mendicant nations such as the Philippines.

To paraphrase French diplomat Charles Maurice de Talleyrand: this is worse than a crime, it is a blunder.