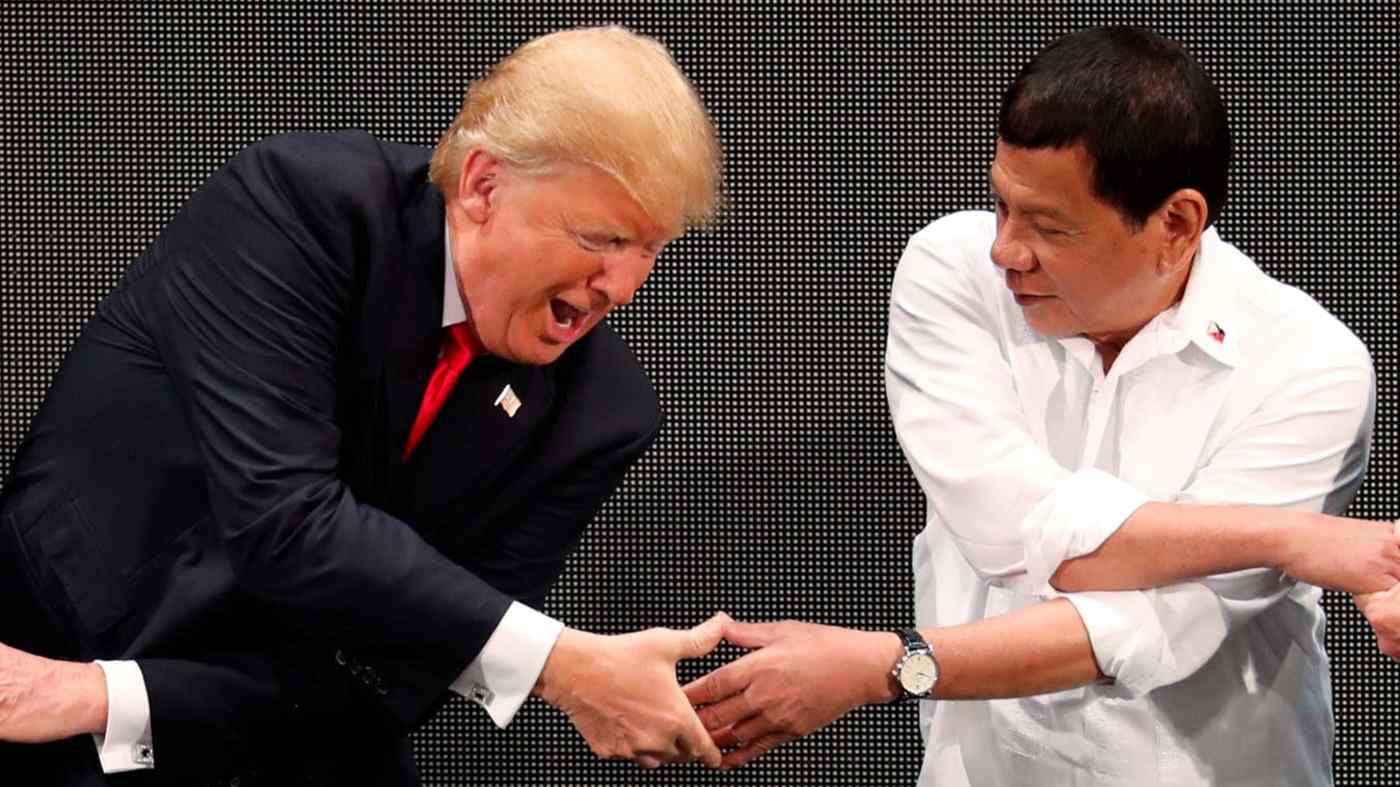 After a year or two of doubts, hesitations and flirtations with China, the U.S. and the Philippines are quietly patching up their frayed relations on urgent strategic grounds.

While both U.S. President Donald Trump and Philippine leader Rodrigo Duterte are known for their penchant to trumpet big policy pronouncements, neither has yet made any dramatic declarations. But, make no mistake, they are setting past differences aside in the face of the big common threat -- China.

As Trump's trade war with Beijing seems to be widening into a broader strategic conflict, Washington is reasserting itself militarily and politically in Southeast Asia and is looking to restore ties with allies.

As the Philippines was not long ago the U.S.'s closest regional ally, Manila is a natural point of focus. Meanwhile, Duterte, who started his rule in 2016 with a conscious pulling away from Washington and an equally deliberate cozying up to Beijing, is under pressure from his security establishment to rebuild the old strategic links.

He is right to do so. While Trump has, at times, proved himself unpredictable, the U.S. is the Philippines' only tried-and-trusted friend. And it is the sole power capable of containing China.

Manila will also be keen to keep Sino-American tensions in check, since a serious military clash could damage East Asia's security architecture and make life more dangerous for the region. The risks were highlighted by the near-collision in September of American and Chinese naval ships in disputed waters in the South China Sea.

Ironically, both Trump, who has called Chinese President Xi Jinping a "friend," and Duterte, who has expressed his "love" for Beijing, began their administrations with a largely China-friendly approach.

Yet, both populist leaders have begun to sour on their initial flirtation with China. In recent months, the two estranged allies have increasingly converged on their perceptions of Beijing.

He also highlighted how China's growing economy fed its military ambitions, as reflected in its accelerated militarization of the South China Sea, despite Xi's earlier reassurance at the White House that it he "no intention to militarize" the disputes.

Portraying China as an unabashed revisionist power, the Trump administration has embraced the 'peace through strength' that Ronald Reagan once applied to the Soviet Union. Not for nothing have commentators spoken of a new Cold War.

In recent weeks, Washington deployed B-52 bombers as well as warships to challenge Beijing in the South China Sea. According to a report by the CNN, the U.S. is also considering exercises in both the Taiwan Straits and the South China Sea in November to "demonstrate that the U.S. can counter potential adversaries quickly on several fronts."

This proactive pushback against China has reassured allies such as the Philippines, which fretted over the Barack Obama administration's seeming lack of resolve to draw the line in the disputed waters.

In recent months, the Duterte administration has taken a tougher approach to China's maritime assertiveness and creeping intrusion into Philippine waters. In May, it issued "three red lines" against Beijing, warning that bilateral relations would be torpedoed by any unilateral Chinese exploration of energy resources in Philippine waters, reclamation works on the disputed Scarborough Shoal and any coercive activities against Philippine military units in the South China Sea.

In August, Duterte openly admonished China, urging it to "temper" its behavior, and reiterating that "the right of innocent passage is guaranteed" under international law and that Philippine troops "do not need any permission to sail through the open seas."

A week later, he openly threatened China with war if the latter ever decided to unilaterally drill in the seabed under in an Exclusive Economic Zone claimed by the Philippines. He warned, with characteristic chutzpah, that his security forces will bring "machete there and cut down the Chinese" if needed.

Crucially, the Duterte administration is increasingly frustrated over China's failure, so far, to deliver on earlier promises of large investments in the Philippines. Beijing has reportedly blocked any major investments amid disagreements over a joint seabed development accord with the Philippines in the contested waters.

Days later, Adm. Philip Davidson, Commander of the U.S. Indo-Pacific Command, made a high-profile visit to Manila, where he signed a bilateral agreement to expand annual military exercises from 261 to 281.

New exercises are expected to focus on maritime security cooperation, enhancing interoperability, and joint war games, including amphibious attack exercises close to the contested waters. In "Cooperation of Warriors at Sea" training in early October (Oct. 3-10) the two allies, along with 100 Japanese Marines, participated in island defense exercises. Future exercises are expanded to see more prominent participation by like-minded powers such as Japan and Australia, which have attended major Philippine-U.S. exercises as observers in recent years.

Manila and Washington are also discussing expanding American access to military locations, particularly the Bautista Airbase in Palawan, which is close to the disputed Spratly Islands.

Amid the Sino-American trade war, the Philippines is also negotiating a bilateral free trade agreement to enhance its access to U.S. markets, while pushing for greater infrastructure investments in return. The Philippines is among the key beneficiaries of planned greater American strategic aid, including the lion share of a $300 million Foreign Military Financing for the Indo-Pacific region.

The Philippines is right to hedge its bets against an aggressive China by fortifying defense and strategic relations with the U.S. Though it may dismay Beijing, a fortified alliance with Washington gives the Duterte administration a stronger hand in its bilateral dealings with China.

So long as China pursues a belligerent approach at sea, and falls short on delivering on ambitious economic promises, Southeast Asian countries like the Philippines will realign with a resurgent Washington, which -- in spite of Trump's isolationist reputation -- still remains as the predominant power in Asia.