East Asia must embrace greater labor mobility after the pandemic

Countries need to maximize the overall economic contribution of migrants Vietnamese migrant workers made jobless and homeless by the pandemic queue for lunch at Daionji Temple in Honjo, Japan, on Feb. 20: the pandemic compelled labor-receiving countries to pay attention to the plight of its migrants.   © Getty Images
CopyCopied

Rashesh Shrestha is an economist with the Economic Research Institute for Association for Southeast Asian Nations and East Asia.

Just before COVID-19 hit, the Japanese government was reforming its labor migration system, which is often criticized for being too restrictive.

In the process, it had signed agreements in 2019 and early 2020 with 12 migrant-sending Asian countries, including six members of the Association of Southeast Asian Nations, a region with which Japan has close trade and investment ties. But the new system is yet to fully take effect as migration rates fell due to border shutdowns and reduced economic activity. Slow vaccination rates in labor-sending countries, the emergence of new variants and unclear strategies for reopening borders could lead to yet another year with a low level of labor mobility.

Even before the pandemic, while goods, services, capital and even technology moved smoothly within East Asia, mobility of labor was relatively restricted. Especially workers characterized as unskilled, a misnomer given their economic contribution, faced huge barriers.

The current policy largely reflects the attitude of receiving countries: they see the economic value of the migrant worker in filling labor shortages but want to avoid the political and social consequences of large-scale immigration. This has resulted in policies that restrict migrant workers' economic freedom, for example, ability to change employers. While politically expedient, this is not the best strategy to maximize migrants' economic contributions. Furthermore, it was one reason migrant workers were hit especially hard by the pandemic.

The pandemic offers an opportunity for labor-receiving countries in the region -- Japan, Malaysia, South Korea, Singapore and Thailand -- to liberalize their foreign worker policy to support their recovery and future growth. After all, a restrictive immigration policy will be unsustainable. And with aging populations, the shortage of workers will only worsen.

Particularly in the services sector, where tasks are non-routine and rely on interpersonal interactions, human labor will continue to be more cost-effective and reliable than any technology. Such labor-intensive economic activities will require a steady supply of workers, even while other sectors benefit from automation. But these labor-receiving countries will not always benefit from a large pool of potential migrants willing to fill their labor needs. 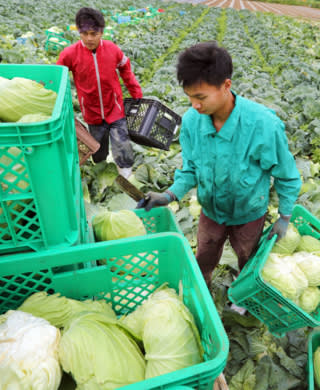 Indonesian technical trainees harvest cabbages at a farm in Ibaraki Prefecture in May 2018: a restrictive immigration policy will be unsustainable. (Photo by Ken Kobayashi)

Today, many aspiring individuals in developing countries are attracted by the prospect of higher living standards in developed ones and are willing to migrate to do jobs shunned by locals. According to a recent report by the Asian Development Bank Institute, the OECD and the International Labor Organization, migration from Vietnam to Japan increased from 11,000 in 2010 to 123,000 in 2018, becoming the most important source country for Japan. Migration from Cambodia and Indonesia, although comparatively small in number, had risen 400% during this period, and that from the Philippines doubled.

However, this trend might not continue for very long. More attractive opportunities may emerge elsewhere as more countries become richer and have disposable income to spend on labor-intensive services. Furthermore, sending countries are themselves growing rapidly, creating better prospects at home for would-be migrants. Vietnam, for example, is one of the fastest-growing economies in the world. Over the medium term, we can expect the pool of Vietnamese willing to pay the high cost of migrating to Japan to shrink.

In addition, given the dynamics of the migration process, the unprecedented disruption of labor movement could diminish the rate of migration post-COVID. One reason migration sustains itself over time is that existing migrants attract new migrants. This is because having a large community in a location lowers some associated costs, such as gathering information and locating employment opportunities. Social scientists call this the social network effect.

As many migrants lost their employment and returned to their home countries due to the pandemic, the size of migrant communities has decreased, and with it, the location's attractiveness to new migrants. So, reforms in recruitment policies to minimize the costs borne by migrants would be necessary to achieve the desired levels of migration after the pandemic.

Greater labor mobility resulting from such reforms will also contribute toward further deepening the East Asian economic integration, creating more growth opportunities for all countries in the region. Not only do migrants send remittances to their families back home, but many also return with greater knowledge and appreciation for the host countries' culture and society. It is thus an additional way of fostering goodwill between people of sending and receiving regions.

For example, Japan has created a positive image in ASEAN through its large economic presence, and it can build on this image by implementing a well-managed migration system. Research has found that such cultural familiarity can translate into greater trade and investment between countries.

The pandemic compelled labor-receiving countries like Japan to pay attention to the plight of its migrants and relax some of the restrictions. This provides useful lessons for improved governance of labor migration. Receiving countries should increase social protections for migrants and expand their economic rights. They should also make permanent the flexibility introduced during the pandemic.

In addition, they need to improve their citizens' opinions by highlighting the positive contributions of migrant workers. Regionally, a concerted effort to enhance labor mobility provisions in trade and investment agreements would be a step in the right direction.