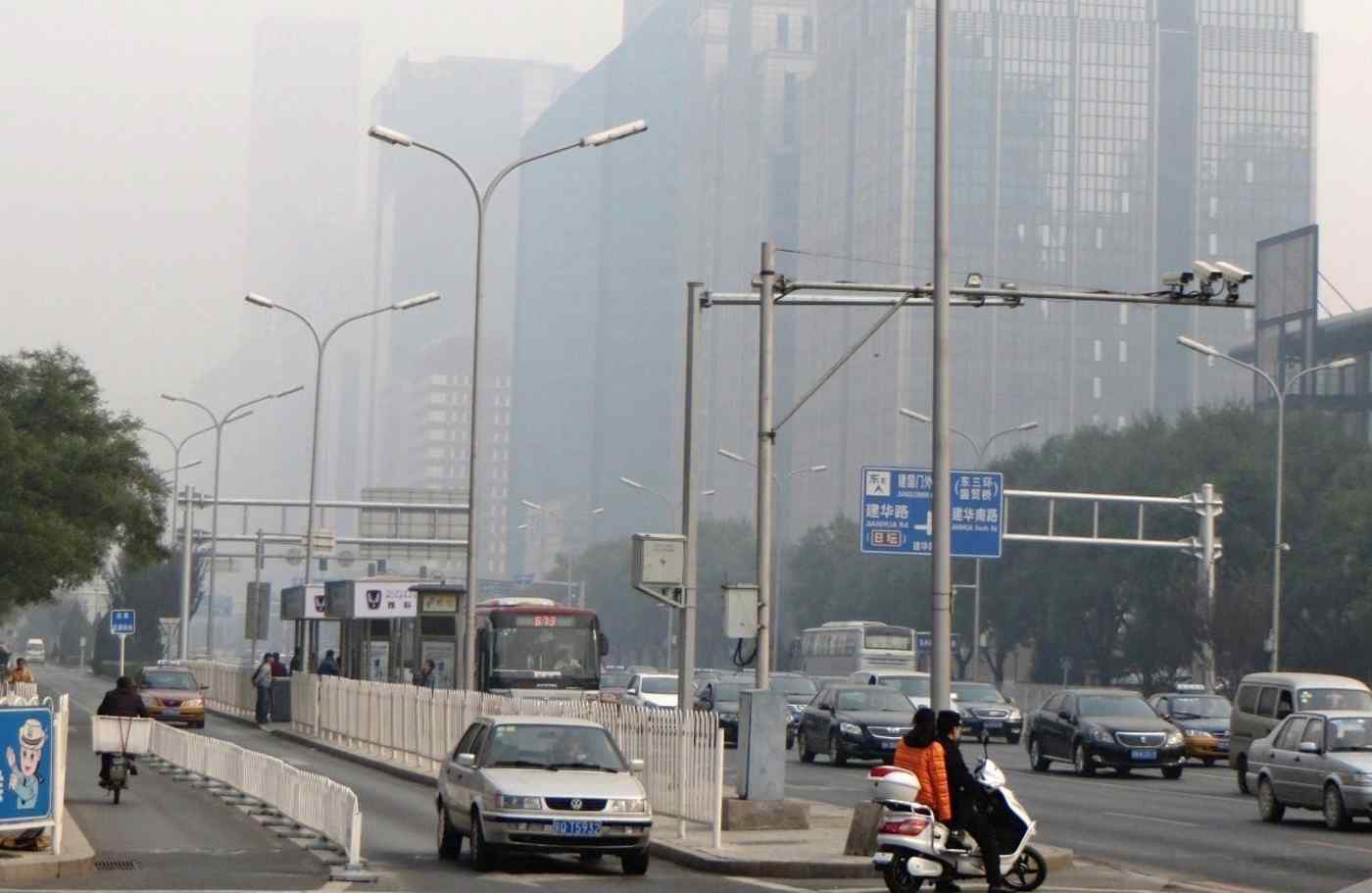 Air pollution concerns rather than global warming were the main motivation for China to push for more sustainable energy.
CopyCopied

Southeast Asia's energy demand is expected to rise by two-thirds by 2040 -- twice the pace of overall global demand. Per capita energy use is low and there is much pent-up demand, particularly for electricity. This demand has to be met if living standards are to rise as expected. However, the region must contribute to substantial cuts in global carbon emission if the Paris Agreement target to keep the global temperature rise below 2 degrees Celsius this century is to be met. Is there any realistic hope of reconciling these conflicting realities?

The intergovernmental International Energy Agency published its new global outlook report on Nov. 14, bringing together countries' energy and emissions plans. It expects global energy demand to rise by 30% by 2040.

By then, mature economies are expected to be consuming less energy. China too will see demand growing more slowly, as its economy decelerates and turns to services. The country has already experienced the surge in demand which comes as electrification becomes near-universal.

Thus the rise in global energy demand is driven largely by countries that are well behind in development and per capital energy consumption. India alone accounts for 30% of the predicted increase, and Southeast Asia another 10%. On this basis, the IEA sees the world headed for serious trouble with global emissions warning of coming "severe impacts of climate change." 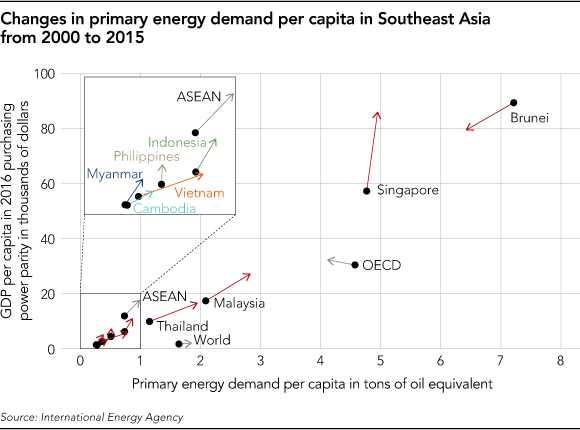 So far, Southeast Asia is a low energy user and has not contributed much to the global carbon problem, but its rising needs must be accommodated. That said, all countries will have to make some contribution if the temperature target is to be met. What might be done in the region?

Many countries outside Southeast Asia plan to cut coal use. Twenty industrialized countries have just signed up to the Power Past Coal Alliance, committing to phasing out coal-fired generation entirely by 2030. Even India, a much less developed nation, is proposing to reduce coal-fired electricity generation from its current share of three-quarters to half. But in Southeast Asia, coal's role is growing, supplying 40% of the increase in energy to 2040. Coal's share in the energy mix will rise from 18% in 2016 to 26% in 2040.

The main reason for this is the cost advantage of coal. These countries are still, for the most part, poor and have tight budgets. They cannot afford budget-funded subsidies for renewables that are common in rich countries.

Renewables, especially solar, have come down dramatically in price and may now be cost-competitive in some circumstances.

But coal's cheapness is assured, while the logistical and generating technology is straightforward and well-understood. The infrastructure requirements are simpler than for gas and it is cheaper than gas for baseload power. Its supply is regular, unlike that of solar and wind. There are large domestic supplies in Indonesia and elsewhere in the region. If the domestic political imperative is to achieve a substantial and rapid expansion in electricity generation, coal is the obvious answer, even if the emissions consequences are dire.

Yet, globally, the trend is to veer toward gas which is seen as an intermediate fuel that later leads to more radical reductions in carbon emissions. The shale revolution currently underway in the U.S. (prospectively supplying massive increases in both gas and petroleum) will play a central role in checking global emissions over the next decade by providing an alternative to coal.

But Southeast Asia, currently a big producer and exporter of gas, will in future produce just enough to meet domestic demand, leaving none for export. Production is predicted to barely maintain current output level over the next two decades, held back by an unhelpful regulatory environment and technical issues. The share of gas in electricity production will fall from 43% to 28% by 2040.

What might be done to reconcile the expected huge rise in the demand for energy with the clear need to restrain emissions? Global conferences and international peer pressure will not do the job. The main motivation must come domestically.

Three separate developments in global energy show emissions could possibly be shifted in the right direction, driven by the powerful motivation of self-interest rather than global climate considerations. First, there is the sharp reduction in costs of solar and wind generation. This may not be enough, currently, to outweigh the attractions of coal, but prices are still falling and cheap battery storage might be the missing link. Second, the shale revolution in the U.S. offers an example where technology has unexpectedly revolutionized supply. If technology offered solutions to the issues facing Southeast Asia's gas fields (notably Natuna in Indonesia with its high carbon dioxide content), ample local supply might shift the energy mix away from coal toward gas.

Third, China offers an example where local pollution -- rather than global climate-change concerns -- has become the motivation for shifting the energy mix in the right direction. The prospects of further pollution in Asia's already smog-filled cities may be the right catalyst for reconsidering the energy mix.

These factors are not, in themselves, enough to take the globe onto a sustainable path. But they are a reminder that sometimes self-interest could work for the greater good. Southeast Asia's declining domestic energy production will turn the region into a net importer well before 2040, at substantial cost to the balance of payments. This pressure on exchange rates and current accounts might encourage governments to look for ways to use energy more efficiently and restrain burgeoning demand.

Reducing energy subsidies would have the two-fold advantage of improving the balance of payments and helping the budget. The IEA estimates that if current subsidies are continued, pro-rated with increased energy demand, they would amount to 4% of regional gross domestic product by 2040. For all the political difficulties of reducing subsidies, the prospective increases in living standards make comprehensive subsidies hard to justify.

The IEA offers an alternative scenario illustrating what a sustainable energy future would look like for the region. It suggests efficiency measures that could trim the expected two-thirds increase in demand.

More strikingly, it considers that the energy mix could be changed, with a dramatic decline in coal -- from more than a quarter of energy demand to less than a tenth. Renewables, particularly solar and wind, could fill the gap.

The IEA's message is clear: Southeast Asia should wean itself off its heavy dependence on coal. Perhaps this message is being heard in the region. Indonesia has set an overall limit on coal production. But this is a long way from acknowledging the sort of drastic shift in energy sources envisaged by the IEA.

We might take comfort from the fact that there is so much room for environmentally friendly reforms even as rising energy needs are met. So many energy-efficiency opportunities remain untapped. The first step on the path of sustainable policy is to recognize that both higher energy needs and lower emissions must be accommodated.

Stephen Grenville is a nonresident visiting fellow at the Lowy Institute in Sydney, and was deputy governor of the Reserve Bank of Australia from 1995 to 2001.