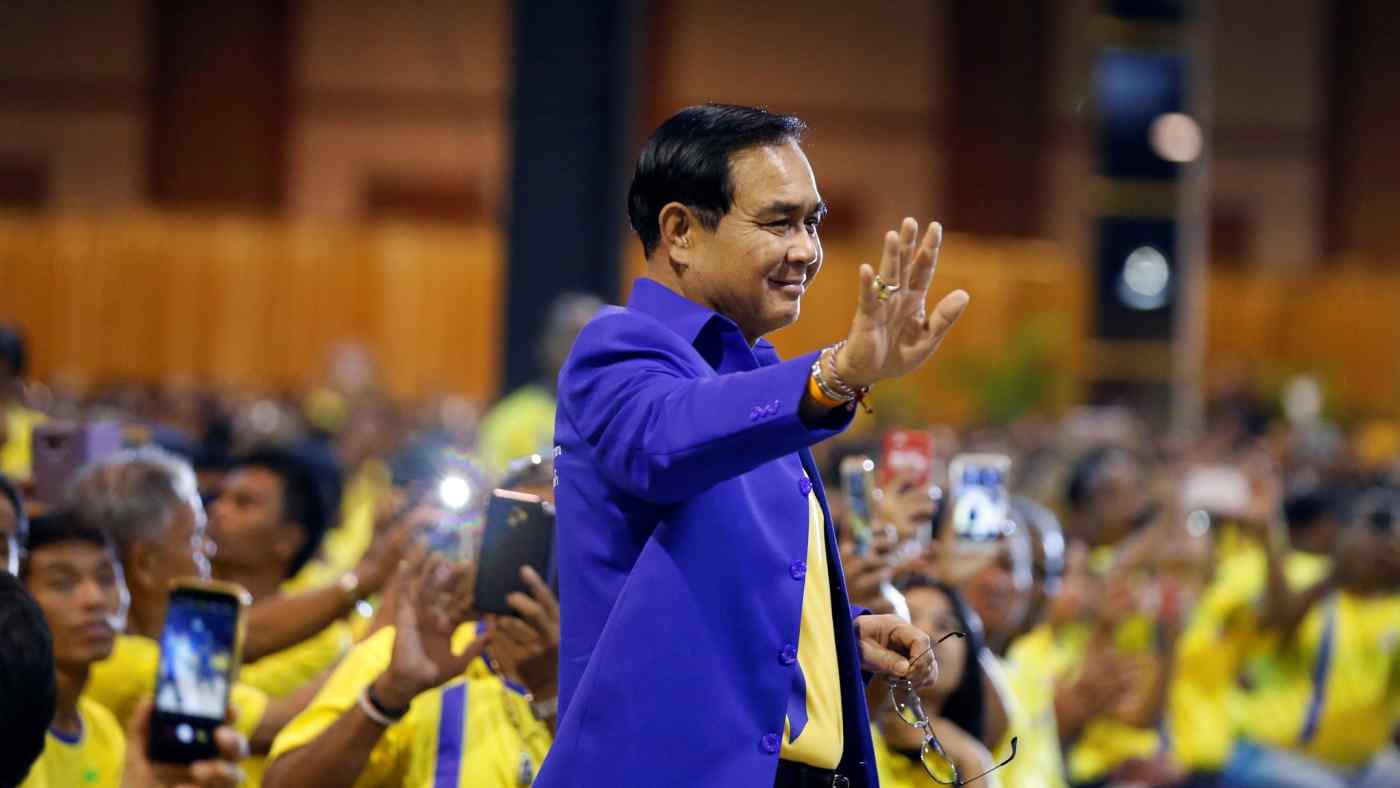 The junta's game plan is to retain power after the election through Prime Minister Prayut.   © Reuters
CopyCopied

As Thailand heads to the poll on March 24 for the first time in nearly eight years, almost five of them under Prime Minister Prayut Chan-ocha after his 2014 military coup, the political stakes have never been higher.

The vote itself will not resolve a long-lasting tension in this predominantly Buddhist kingdom of 70 million between de facto military rule and the prospects for the emergence of a stable democracy.

But the poll is a necessary step to reach the point at which either a wide-ranging compromise in favor of democracy will emerge or Thailand will stay stuck with authoritarian rule and slip into intractable political conflict.

While the government and its challengers seem implacably divided right now, the election could yet generate dynamic change, particularly if the new King plays a constructive role.

Current Thai politics has emerged from three constitutions from 1997, 2007 and 2017. These three charters began with a liberal progressive agenda after the 1992 civilian-led overthrow of a disguised military dictatorship. The 1997 constitution promoted political transparency, accountability and stable government. The 200-member senate became fully elected for the first time, and the 500-strong lower house was divided into 400 constituencies and 100 party-list members.

Voters received two ballots, one for constituency MPs and the other for a party. The idea was to both strengthen the party system and build local bonds. The first-ever party-list system also allowed parties to recruit policy experts without burdening them with campaigning. Most important was a clutch of new accountability-promoting agencies, led by the Election Commission, National Anti-Corruption Commission, and Constitutional Court.

Notwithstanding its good intentions, the 1997 constitution ran up against the political juggernaut represented by businessman Thaksin Shinawatra, a mobile phone concessionaire who spearheaded a broad alliance.

The Thaksin camp won support with innovative policies, such as cheap health care and rural microcredit, but it was beset with conflicts of interest and corruption allegations. After winning unprecedented re-election in a landslide in 2005, the Thaksin government faced its first street demonstrations soon after, culminating in a military coup in September 2006.

The Thaksin challenge should have been addressed by beating him at the polls. But his opponents answered with two military coups in 2006 and 2014, plus the 2008 judicial dissolution of the Thaksin-aligned governing party.

These interventions were accompanied by yellow-clad anti-Thaksin street protests in Bangkok. After their virtual disenfranchisement, pro-Thaksin red shirts took their turn in the streets in 2009 and 2010, only to be suppressed each time by the army.

Meanwhile, the two coups produced two more constitutions, tinkering with the rules of 1997.

In the 2007 document, half the senate seats went to appointees selected under junta influence. Meanwhile, the proportion of lower house MPs coming via party lists was raised from 100 to 125, to improve the chances of the anti-Thaksin Democrat Party, which had lost widely on constituency ballots but had fared better on national party lists. Yet Thaksin's second-generation People's Power Party still came out on top in the December 2007 poll. After another coup by the same cohort of generals, the 2017 constitution swung further toward authoritarianism. The entire 250-member senate is now directly and indirectly selected by the junta, and chooses the prime minister. In the lower house, party-list members are increased still further, to 150. In a further tweak, one ballot replaces two, so voters choose a constituency MP but then their ballots are also counted nationwide in a party-list system. The idea is to undermine big parties, such as Thaksin's Pheu Thai, in favor of smaller parties. Yet Pheu Thai, headed by Thaksin's sister Yingluck Shinawatra until the latest coup, is still on course to be the largest winner though without an overall bicameral majority.

The junta's game plan is to retain power after the election through Prayut and the pro-military parties, such as Palang Pracharat (PPRP). Despite benefiting from the Prayut government's policy platform, state machinery and largesse, PPRP and its allies are not polling well.

But they will be able to turn to swing parties such as the Democrat Party, under Abhisit Vejjajiva, which are intent on joining the post-election government and secure cabinet portfolios. They come from the same anti-Thaksin cradle of yellow-leaning constituencies as the PPRP.

At issue will be the premiership. If the PPRP's results come out ahead of the Democrat Party's, then Prayut will most likely stay prime minister, reinforced by the junta-appointed 250 senators. Even if the Democrat Party secures more MPs than PPRP, Prayut will have the senate advantage and army backing, and could be helped by potential internal dissenters among Democrats who would undermine Abhisit and support the army strongman.

The game plan for the anti-junta, anti-Prayut bloc is clear. This bloc originally comprised the Thaksin-aligned Pheu Thai and Thak Raksa Chart (TRCP), along with five other allies.

But the recent dissolution of Thai Raksa Chart by the Constitutional Court for its attempt to name the king's sister its prime ministerial candidate dealt the anti-junta bloc a blow. Even so, if it were not for the appointed senate and the requirement to secure at least 376 seats in the two chambers, this bloc could potentially form a government with a 251-member simple majority in the lower house.

But with the new constitutional setup, this bloc is virtually certain to end up in opposition to a junta-backed coalition government, even though the bloc's combined MPs are likely to exceed 200, and could top 250.

If the opposition does this well, the junta-led government will be weak because the senate can help secure the premiership but law-making is confined to the lower house. The opposition bloc can stymie the likely junta-backed government.

Thus the most probable scenario is a junta-backed and senate-supported coalition government, most likely under Prayut, with most parties included, except the anti-junta groups.

But because it is unlikely to command a sufficient number of MPs for stable rule, parliamentary deadlock will likely ensue in the lower house, with all roads leading to another constitutional crisis in the coming months.

When the next crisis emerges, it will be another deja vu for Thailand but this time the result may be different. Critical to the success of the past yellow-clad protesters was their royalist claims linked to the late King, Bhumibol Adulyadej.

However, the 66-year-old new monarch, Maha Vajiralongkorn, has so far shown a preference to avoid being used by either side.

The unproved new monarch, who has yet to earn the esteem enjoyed by his father, may be interested in having Thailand move forward through compromise, out of the conflict of the past. This could be an attractive potential legacy for his reign.

If so, Thailand's playing field may become more even. When the junta's side no longer has the inherent advantage of palace backing, it might realize it cannot win every time and may be willing to negotiate.

But an effective compromise requires sincerity from the Thaksin side as well. This sets the scene for a new political period over the next 18 months in which the yellow, anti-Thaksin, forces may no longer have the upper hand, outright.

It would be the ultimate irony if the late King's well-regarded long reign, which was tarnished in its twilight by protests and coups, is followed by a new era, in which an untested sovereign helps usher in a democratic way forward.

Thitinan Pongsudhirak teaches International Relations and directs the Institute of Security and International Studies at Chulalongkorn University in Bangkok.