Elections out of the way, Japan turns attention to US trade deal

Trump will demand tough concessions from Abe on cars, beef and more American beef has a 38.5% tariff when entering Japan. (Photo by Yasuaki Sako)
CopyCopied

At his news conference in Tokyo on May 26, U.S. President Donald Trump said, "Trade-wise, I think we will be announcing some things probably in August that will be very good for both countries."

The mention of August was significant on three counts. First, this was much sooner than the six-month deadline for the trade talks Trump had announced earlier in May. Second, August would be when the dust had settled from the Upper House elections of July 21.

Finally, it fueled speculation that a secret deal had already been cut between Trump and Prime Minister Shinzo Abe in which Trump would wait until after the elections to announce any results of the negotiations -- to help Abe do well in the elections -- in return for significant concessions.

With the elections now out of the way, and with the ruling LDP-Komeito coalition having maintained its majority, but not the two-thirds required to revise the constitution, many observers speculate that a trade deal is indeed likely in August. But prospects for an imminent comprehensive trade deal are low.

The biggest reason is that insufficient time has been allocated to resolve the three major issues under negotiation: Japanese tariffs on American agricultural products; American tariffs on Japanese vehicles -- autos, trucks, motorcycles -- and auto parts; and Japanese auto exports to the U.S.

Because Trump withdrew the U.S. from the Trans-Pacific Partnership, American agricultural products including beef, pork, and wheat continue to face high tariffs in Japan. For instance, American beef has a 38.5% tariff when entering Japan, whereas beef exported to Japan by Australia, Canada and New Zealand -- members of the Comprehensive and Progressive Agreement for Trans-Pacific Partnership -- faces a tariff of 26.6% as of April. It will, over a 16-year period, see tariffs reduced to 9%.

The U.S. is seeking to secure tariff levels at least as favorable as those obtained by the CPTPP countries.

Whether the Trump administration, which was severely critical of the TPP, is willing to agree to this remains unresolved.

Japan's leverage is the attractiveness of its large market for agricultural products, which the U.S. is increasingly losing to the CPTPP countries and to European countries as a result of the EU-Japan Economic Partnership Agreement, which went into effect on February 1 of this year.

But the U.S. has even greater leverage because its market is so important for Japanese auto and auto parts manufacturers,

The issue of Japanese auto exports to the U.S. is the most contentious and difficult to resolve. Japan exported over $56 billion in motor vehicles and parts to the U.S. in 2018, comprising a significant portion of the $68 billion bilateral trade deficit the U.S. has with Japan. 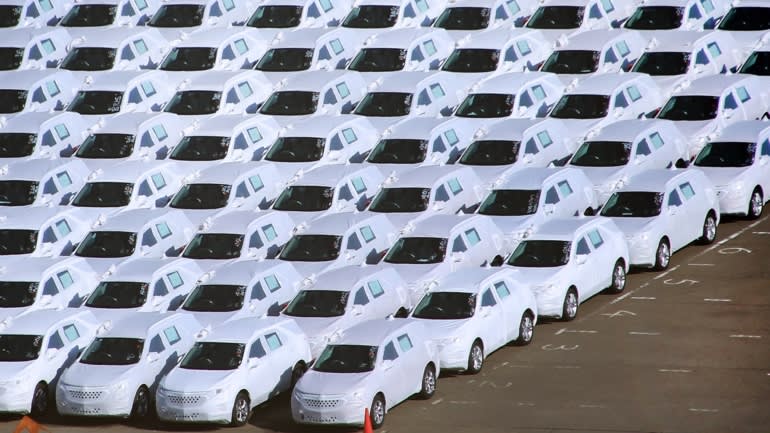 The issue of Japanese auto exports to the U.S. is the most contentious and difficult to resolve. (Photo by Akira Kodaka)

The U.S. seeks to reduce Japanese auto exports to America, perhaps through a voluntary export restraint of the kind that Japan implemented from 1981 to 1994. Japan has resisted this notion, offering instead to increase Japanese auto companies' investment in the U.S., thereby creating jobs for American workers.

The Trump administration has hinted at the possibility of invoking Section 232 of the Trade Expansion Act of 1960, which would allow the U.S. to impose, on national security grounds, tariffs of up to 25% on autos exported to the U.S.

Whether the U.S. would actually invoke this provision and impose tariffs is not yet known, but certainly adds a level of complexity and uncertainty to the negotiations.

Japan has stated that it would like to conclude the talks as a "package deal" involving all three elements under negotiation. The U.S., on the other hand, prefers a staged approach -- perhaps accounting for Trump's mention of August.

Also unclear is the issue of to what extent and at what stage the Trump administration intends to have the U.S. Congress play a role in approving the bilateral deal.

All of this should be seen in the context of the Trump administration's ongoing trade disputes with China and the E.U., as well as the U.S. presidential election, which is starting to heat up although the election is more than a year from now.

Just as candidate Trump used trade including TPP, North American Free Trade Agreement, and the U.S.-Korea Free Trade Agreement as a cudgel to criticize Democrats, President Trump will almost certainly want to tout "success" in trade negotiations since assuming office as a reason voters should reelect him for a second term.

Although U.S.-Japan trade negotiations are not likely to devolve into the kind of tit-for-tat trade war we are seeing between the U.S. and China, they are unlikely to be resolved quickly and simply by August.

This is not to rule out the possibility of an "interim deal" on agriculture being reached soon. But given the complexity of the issues at hand, a comprehensive bilateral trade deal will most probably require waiting until sometime in 2020.

Glen S. Fukushima is a Senior Fellow at the Center for American Progress in Washington, D.C. and a former Deputy Assistant United States Trade Representative for Japan and China and former President of the American Chamber of Commerce in Japan.