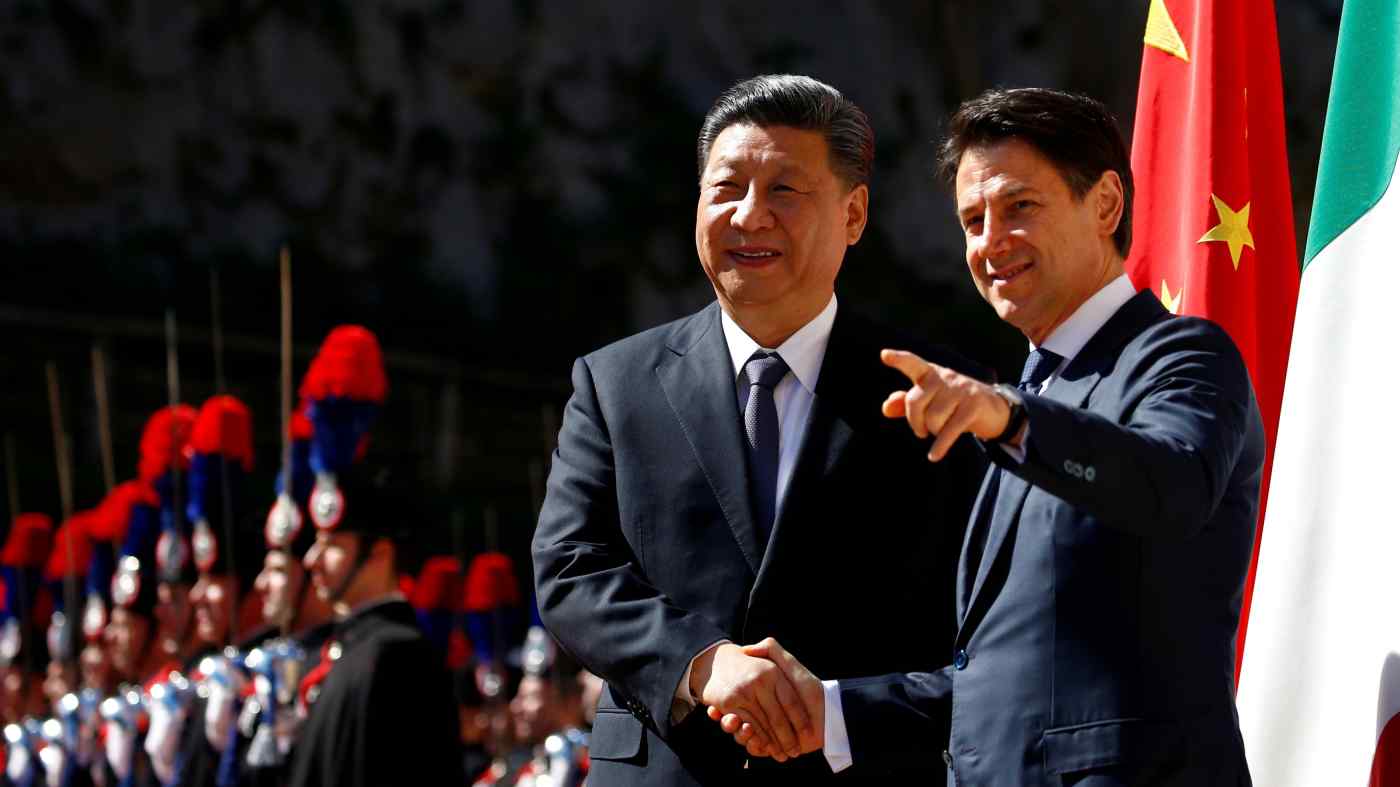 Xi Jinping shakes hands with Giuseppe Conte as he arrives at Villa Madama in Rome on March 23, 2019: on that day, Italy announced it was joining the BRI.   © Reuters
CopyCopied

Humphrey Hawksley is a former BBC China Bureau Chief. An expanded and revised edition of his latest book "Asian Waters; The Struggle Over the Indo-Pacific and the Challenge to American Power" is published in this month.

With its unusually blunt warning to China, accusing it of exploiting COVID-19 to undermine European democracy, the EU has shown a long overdue change of mindset after years of jumbled, divisive and largely reactive policies in dealing with Beijing.

The European Commission said that China, together with Russia, was responsible for an unprecedented wave of misinformation about the pandemic. "We have evidence. We should not shy away from naming and shaming," said Vera Jourova, European Commission vice-president. "A geopolitically strong EU can only materialize if we are assertive."

This new position should draw a line under more than three decades of mercurial policies and deliver instead an unsentimental understanding of what China is as a nation and what it wants to achieve.

Thirty-one years ago, in June 1989, Europe condemned the Beijing government as a pariah for its violent repression of the Tiananmen Square democracy protests. Twenty years later, it welcomed the same government with the same values as a savior in the 2009 economic crisis. In 2015, during President Xi Jinping's lavish state visit, Britain went as far as declaring a "golden era" in U.K.-China relations.

Yet this was precisely when Beijing was building its military bases in the South China Sea, drawing up plans for the mass imprisonment of Xinjiang's Uighurs and defining the international political landscape -- in Karl Marx's words -- as a "struggle between two social systems," meaning here the Communist Party's authoritarianism against the West's democracy.

In recent years, China has made substantive inroads into European institutions. For example, in 2003, without government scrutiny, the U.K.'s biggest telecoms company, BT, hired the Chinese tech giant Huawei Technologies to build part of its network. Huawei is now so embedded in the U.K.'s communications infrastructure that the government feels compelled to use it for its fifth-generation, or 5G, networks, causing a security rift with the U.S. and open arguments within its cabinet.

In 2012, Beijing set up a formal economic organization with sixteen governments inside and outside of the EU. Known as the Sixteen plus One, its purpose is to inject Chinese investment into the poorer parts of Europe.

Hungary, a member of both the EU and the 16+1, now with Greece, the 17+1, is today leading an authoritarian pushback against EU values. Its prime minister, Viktor Orban, has named Beijing as an alternative partner to Brussels and, on March 30, used COVID-19 as a premise to suspend parliament and rule by decree. China's trillion-dollar Belt and Road Initiative infrastructure plan has won over European countries too. On March 23, 2019, Italy, the EU's third largest economy, announced it was joining the BRI, even though two weeks earlier the EU had declared that China was a "systemic rival promoting alternative models of governance."

This handful of examples exposes Europe's contradictory policies to such an extent that, as with Asia, China is viewing this region as one that can be divided and exploited.

So how should Europe draw up its new working model?

There need to be defined areas where Europe can work with China and those from which it must be excluded. Those can be shaped asking a few basic questions.

Are governments being overcautious about China's reaction when calculating how they should deal with thorny issues such as Taiwan, the Dalai Lama or the South China Sea?

For the most part, China's bark has proved far worse than its bite. From 2010 to 2016, Norway experienced a public freeze in relations with China after the Nobel Committee awarded its Peace Prize to dissident Liu Xiaobo.

While seafood exports suffered, in other areas such as oil, chemicals and machinery, exports rose, and by 2015 bilateral trade had reached record levels. Britain, France, Sweden and others report similar outcomes after rows with Beijing.

Another question is the economic benefit of Chinese investment, for which figures are sketchy. Up to 2018, Beijing claimed it had created 327,000 jobs, a number challenged by analysts. "A lot involves buying existing European companies," says Ian Bond of think tank the Centre for European Reform. "As far as one can tell, such investment may ensure that jobs are not lost, but it rarely seems to create much new employment."

The conclusion, therefore, is that Europe can probably be much tougher on China than it currently is.

The challenge is to forge a cohesive approach that balances economic and security imperatives with an awareness that China at some stage could be an openly hostile adversary.

Europe has too much else on its mind to construct a new regulatory institution. But it could adopt the phraseology of the Indo-Pacific where "like-minded" governments, committed to international rule of law, are becoming the primary front against Chinese-initiated instability. France and the U.K. have already joined this "like-minded" club by deploying naval power to Asia to help balance Chinese expansion.

A similar premise could be applied to China's influence in Europe, with the unequivocal message that if Beijing wants to be welcome it needs to stop its political interference.

European governments must spell out that their national security and democratic values are not negotiable, and that the "like-minded" group of nations is far more powerful and cohesive than China's one-party state.