Europe should lead at home and leave Indo-Pacific to the U.S. Lloyd Austin, second left, and other defense ministers gather during the Shangri-La Dialogue in Singapore on June 11: Delegates were uncommonly frank in their willingness to call out Russian aggression.   © AP
CopyCopied

Blake Herzinger is a nonresident WSD-Handa fellow at Pacific Forum, a nonprofit, foreign policy research institute based in Honolulu, Hawaii.

While Russia's invasion of Ukraine is shaking western European defense budgets out of their decadeslong doldrums, Vladimir Putin's aggression near NATO's front line is going to set back European security engagement in the Indo-Pacific. That might be for the best.

European perspectives at last weekend's Shangri-La Dialogue were unusually robust, departing from the usual tired lines about multilateralism and so-called nontraditional security issues, and instead highlighting reinvigorated defense investment in many European capitals. Delegates were uncommonly frank in their willingness to call out Russian aggression and commit themselves to a new course in terms of military readiness.

This newfound commitment to defense arrives as many European countries have been moving to develop their strategies for boosting security engagement in the Indo-Pacific and conducting high-profile military deployments to the region to offset a rising tide of Chinese influence.

It could be said that, in some ways, Putin's egregious war of conquest is serving as a useful shield for Beijing, drawing away attention and criticism from Beijing's own misbehavior as well as creating a crisis that will dilute European contributions to upholding the existing rules-based order in the Indo-Pacific.

Despite reiterated European commitments to deploying forces to the region and regional leaders like Singapore's Defense Minister Ng Eng Hen welcoming such deployments, Europe lacks the depth to deter Russia at home while sustaining meaningful military engagement in the Indo-Pacific at the same time.

Meanwhile, U.S. commitments in Europe are displacing its own stated strategic priorities. Commitments to meeting the NATO standard for defense spending are encouraging, particularly those especially dramatic increases like those announced in Netherlands and Germany, but these will take years to manifest in terms of equipment and platforms such as ships and aircraft.

In the meantime, Russian moves on land and at sea will demand most of Europe's attention and require European nations to keep their forces at home. Still, that is probably not the worst outcome, nor is it the first time such a recalibration has occurred. European NATO member states previously expressed a desire to increase their presence in Asia in 2013, only to have them dashed by Russia's first invasion of Ukraine in 2014.

This is not to say that Europe's more recent recognition of the importance of Asia to their own security is unimportant, or that their presence is unwanted, but the tyranny of distance is not in Europe's favor.

Europe's rhetorical support and proactive engagement in international forums will remain valuable, and enthusiastic economic engagement will continue to benefit all parties. However, Europe will likely need to marshal its forces and resources for commitments closer to home until defense spending increases flow through to improving their capacity to contribute to the Indo-Pacific without comprising Europe's own security.

Washington will benefit from Europe leading on European defense. U.S. Secretary of Defense Lloyd Austin reiterated at the Shangri-La Dialogue that the Indo-Pacific remains the priority theater of operations for the U.S., yet few observers from the region would likely agree that it feels that way.

Domestic political turmoil and the war in Ukraine dominate headlines emanating from Washington, with the Indo-Pacific lagging far behind. Pledges of investment in the region pale in comparison to the Biden administration's announcement of over $50 billion committed to Ukraine's defense.

Defense supplies being poured into Ukraine will be slow to replace, leaving the U.S. less prepared to face a challenge in the Pacific or to support regional partners and allies in the event that they are targeted by an aggressive neighbor. 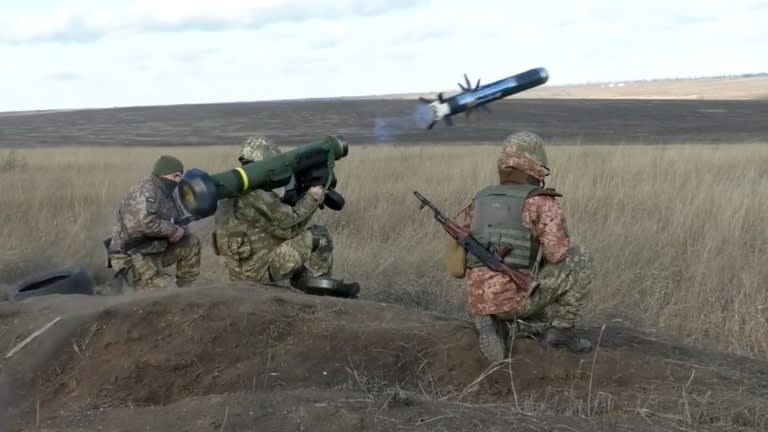 Ukrainian soldiers launch a Javelin missile provided by the U.S. during a military exercise in Donetsk region on Jan. 12: Defense supplies being poured into Ukraine will be slow to replace. (Handout photo from Ukrainian Defense Ministry)   © AP

As a superpower, of course, the U.S. can and must be able to maintain multiple efforts simultaneously, but the challenge of leading in both Europe and the Pacific is beyond Washington's capacity. Better, then, to encourage Europe to lead at home and to allow the U.S. to focus its efforts in the area identified as the priority in its own national defense strategy.

American allies in Canberra, Tokyo and elsewhere in the region would doubtlessly love to see continued efforts to boost Europe's presence. Some states, like the United Kingdom and France, will necessarily maintain some level of presence due to their territorial holdings and other partnerships. But, to the degree that an increased European presence in Asia means that the U.S. must focus more of its own attention on Europe, then most Indo-Pacific policymakers would happily accept a less tangible expression of European commitment.

It is the U.S., not the European states, that is the hub of multiple mutual defense treaties in the region and whose commitment is integral to the security of allies like Australia, Japan, South Korea and the Philippines. In a time of constrained budgets and dwindling assets, policymakers on both sides of the Atlantic will need to become more pragmatic in their prioritization.

Europe's turnaround on defense is critical to global security and the shared desire to deepen security ties is laudable. But, pragmatically speaking, the best thing Europe's leaders could do to help U.S. allies in Asia is to focus their energies on the defense of Europe.