Europe wakes up to the China challenge

But the search for 'strategic autonomy' faces obstacles A virtual meeting of the 4th Regional Comprehensive Economic Partnership Summit, pictured on Nov. 15 in Hanoi: RCEP is the latest sign of a shift in economic power. eastward.   © Reuters
CopyCopied

The pan-Asian trade pact between 15 countries including Japan, China, and South Korea -- the Regional Comprehensive Economic Partnership, or RCEP -- is a wake-up call for the West.

With the U.S. conspicuous by its absence, RCEP is the latest sign of a shift in economic power eastward. China's stunning third-quarter rebound from COVID-19 contrasts starkly with the relatively feeble recovery in Europe, where governments are still struggling with a second wave of the pandemic.

China has become the European Union's most important trading partner -- a remarkable achievement given Beijing only joined the World Trade Organization 19 years ago. "China is catching up even faster," says Herman Van Rompuy, former Belgium prime minister, president of the EU council, and leading member of the European Policy Centre in Brussels.

Van Rompuy -- a devotee and publisher of haiku poetry -- knows Asia well. He observes that China's rise and Donald Trump's "America First" protectionism has created a new term in the EU's political lexicon: strategic autonomy. Europe is eager to escape being sandwiched between the two superpowers, but "strategic autonomy" is more easily said than achieved.

First, the EU must judge where best to carve out freedom of maneuver. Should it focus on nurturing specific industrial sectors to create "European champions?" Or is it better to set standards like the General Data Protection Regulation, or GDPR, which are later adopted by the U.S. and the rest of the world?

The EU has a far more developed internal trading bloc -- the single market -- than the RCEP model. But the single market, in turn, requires a "level playing field" that limits individual countries' discretion to subsidize sectors. Strategies aimed at protecting sectors against U.S. or Asian competition can therefore fall foul of EU rules on competition and the application of state aid.

Between 2014 and 2019, the European Commission antitrust authorities, led by the formidable Margrethe Vestager, blocked six mergers in six different sectors: telecoms, financial services, cement, copper, steel and, most notably, railways. In the last case, the Danish commissioner scuppered a combination between Siemens and Alstom to create a European champion to combat the rapid emergence of China's state-backed train maker CRRC.

The Chinese colossus, itself a fusion of two big rail equipment groups, had revenues of $30 billion in 2017 and 12% of the worldwide market in trains, services, and signaling. Siemens and Alstom together would have sales of $15 billion and about 9% of the market. Verstager's decision provoked outrage in Berlin and Paris, where mercantilist instincts go back to the late 17th century. 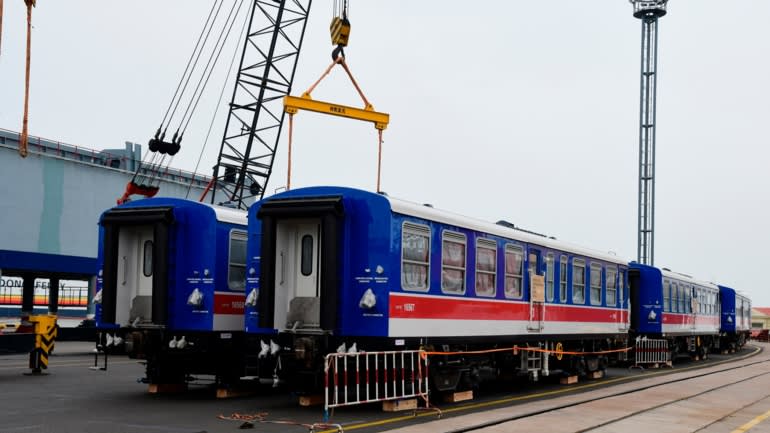 Diesel multiple units for Sri Lanka manufactured by a CRRC subsidiary at the dockyard in Qingdao: the Chinese colossus had 12% of the worldwide market in trains, services and signaling in 2017.   © AP

The political tides have, however, shifted since the outbreak of the COVID pandemic. Governments have been forced to provide billions of euros of financial aid to keep companies afloat. The state is suddenly front and center in the economy.

Second, the coronavirus pandemic has turbocharged the internet, highlighting Europe's digital gap with Asian countries. Most European governments have a long way to go to catch up with Singapore, Taiwan and South Korea in terms of data management for reliable tracking and tracing. The lag on the development and application of artificial intelligence compared to mainland China is even more serious.

Third, the brutal lobbying campaign by both China and the U.S. over the adoption of Huawei Technologies' fifth-generation, or 5G, superfast broadband technology was a sober reminder that Europeans had no technological alternatives. Huawei wiped out competition from the likes of Alcatel more than a decade ago.

Finally, there is the "British question." Having exited the EU (Brexit), the U.K. government has proclaimed the need for a new industrial policy. Prime Minister Boris Johnson is insisting on maximum flexibility, without being bound by EU rules. Last week, he unveiled a 10-point plan to wean the economy off carbon, with state support for the wind industry and new nuclear plants. "We will make the U.K. the Saudi Arabia of wind," Johnson promised.

Continental Europe fears that an unfettered U.K. could use state aid to become a formidable competitor -- which is why the EU is playing hardball in the final phase of the Brexit negotiations on a future trade deal. Member states also want to draw on the 1.8 trillion euro summer rescue package for their pandemic-ravaged economies, including provisions for common borrowing on the bond market. This will include tens of billions of support for "strategic" industries, notably in digital technology.

Europe is also signaling a willingness for a closer relationship with the incoming Biden administration. In a speech this month, Ursula von der Leyen, EU commission president, said the U.S. and Europe enjoyed power and influence "indispensable" to global cooperation. A common agenda would cover climate change, trade and digital issues -- including the taxation of big data giants like Amazon, Facebook, and Google.

Twenty years ago, European politicians employed similar heady rhetoric with the launch of "the Lisbon strategy" to make Europe "the most competitive, dynamic and knowledge-based economy in the world." Most of the goals were not achieved. The difference today is that China has become an economic force scarcely imaginable at the turn of the century. Europe cannot afford another lost decade.