Every day is International Men's Day in Japan

Country must fight misogyny and sexual harassment from the ground up 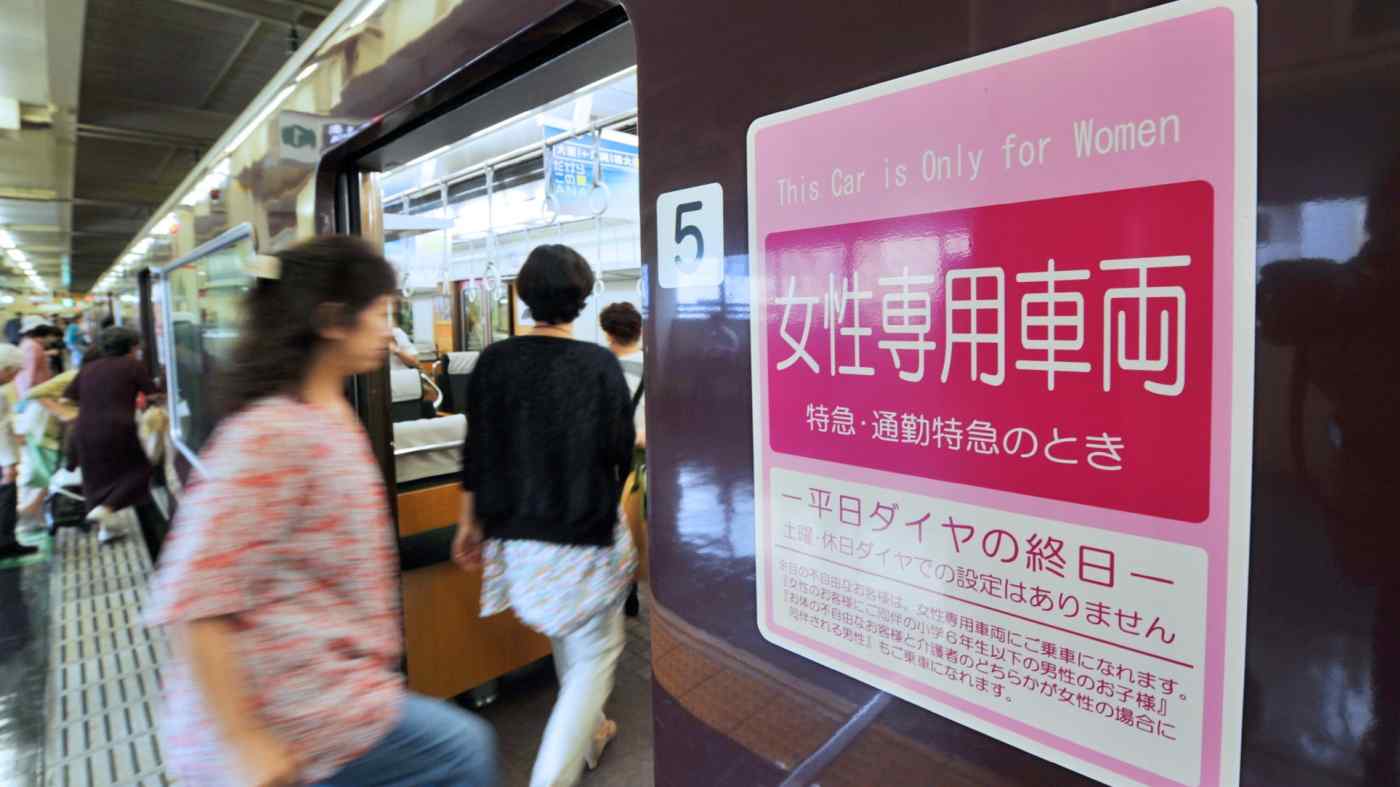 Hankyu Railway's women-only carriage at Osaka-Umeda station, pictured in June 2013: It is a tool to compartmentalize women. (Photo by Atsushi Ooka)
CopyCopied

International Women's Day on March 8 is about building a gender-equal world. In Japan, however, it is a sad reminder that the other 364 days belong to men.

Asked whether they recognize any improvement in gender equality in their workplace, 55% of 2,000 working women responded negatively in a 2019 Nikkei survey. According to the World Economic Forum's gender gap index released at the end of 2019, Japan slipped to 121st out of 153 countries, dropping 11 places from 2018.

Clearly, the government's top-down directive, with its feel-good slogan "toward a society in which all women shine", has had limited effect. To fix the gender gap in Japan, we must face this inconvenient truth and work from the ground up with zero tolerance for disrespect against women.

One of Japan's quirky inventions to deal with the scourge of misogyny in public space is the women-only carriage. Normally limited to rush hours, women-only cars in mainline or subway trains are prominently marked by their large stickers on the windows -- pink, obviously.

At a glance, women-only cars may seem like the shallow result of marketing tactics targeting one gender, just like ladies' day at the cinema on Wednesdays. In truth, they are a product of the constant sexual harassment that women, including students, are subject to in crowded trains by groping men, total strangers. The first such car appeared as early as 1912. More than 100 years later, they are a common sight.

Sociologist Masako Makino points out in her 2019 book What is the Crime of Molesting? that a surge in false charges since the early 2000s twisted the rationale for women-only cars: they now protect innocent men from women wrongly accusing them, rather than women from intrusive men.

In either case, it is a tool to, literally, compartmentalize women, making them a foreign object and therefore second-class citizens in the men's world.

Incidents of harassment, and the resulting women-only cars, are permanent fixtures in Japan because of society's predisposition to objectify women. Not too long ago, men's groping on trains was regarded as lighthearted fun that should never be taken seriously, even by the victims.

While Japan does not have a monopoly on the normalization of misconduct, its society's homogeneity spreads such behavior and suppresses dissenting views. The fact that many male commuters, often fathers and husbands themselves, casually fondle women points to the banality of their false sense of entitlement.

Naturally, male superiority infects the workplace. Too often women are subject to lewd comments from their male colleagues about their body or how they dress. Often disguised as compliments, the remarks may be, just like groping in the train, defended as lighthearted. But they are in fact a manifestation of male psychological dominance.

If Japan has been relatively muted on the #MeToo movement, it is because the fight here is less about calling out the powerful Hollywood predator types who weaponize sex. Rather, it is against the silent nod of the society which permits everyday acts of misogyny.

The #KuToo movement, a Japanese take on #MeToo which protests mandatory wearing of high heels in certain workplaces, may appear frivolous. But it is in fact a fight against grassroots sexism. The #KuToo movement is a fight against grassroots sexism.   © Reuters

Government policies will not be enough to change this mindset. We need to fight sexism from the ground up. As basic as it may seem, we must denounce wrongdoing by spelling out what is wrong. Just as turning a blind eye to a broken windowpane leads to more serious crimes down the road, giving everyday "small" harassment a pass leads to the overall gender inequality.

Makino approves of the ingenuity of the phrase "Groping in the train is a crime," introduced in 1994 and still often seen on posters in stations. It confronted the prevailing and unsaid notion that it was casual fun. Stating the obvious was necessary.

Taking a lesson from the trains, employers must set clear, zero-tolerance guidelines against petty sexual harassment. The organization will only learn that the company is serious about gender equality after management follows with punishment for behavior against the guidelines.

For most men and women who work in Japan, sexism is still in the air. Unfortunately, there is no convenient barometer, like a measure of toxic particles, to gauge the level of grassroots sexism. Neither is the act of calling out each petty incident as externally laudable as having one more woman director on the board.

But one organization at a time, the male-centric gender hierarchy must be challenged and corrected. Without the ground-up effort, International Women's Day will always bypass Japan.