Frequent reliance on punitive tools is resulting in diminishing returns The Biden administration is expected to further elaborate its vision of relations with China.   © Reuters
CopyCopied

Owais Zaheer is a geostrategist who advises financial institutions on geopolitical developments and risks. He is based in Canada.

A preoccupation with forced labor tainting U.S. supply chains is just one of the many quarrels that now bedevil China-U.S. ties these days.

Last month, the U.S. Congressional-Executive Commission on China issued a media release urging Apple CEO Tim Cook to transparently engage with U.S. Customs to ensure that his company's supply chains "are free of forced labor and to divest from Chinese suppliers who take part in the Chinese government's 'labor transfer' programs."

While the Trump administration inaugurated the original pushback against China by imposing sanctions, some speculated that the new Biden administration would moderate or even disavow Trump-era policy. Not only has this not occurred, but President Joe Biden has largely retained Donald Trump's tough approach toward Beijing, with U.S. sanctions against China continuing to balloon in both scope and complexity.

Since imposing an arms embargo against Beijing after the crackdown on protesters in Tiananmen Square in 1989, there had been a long lull wherein trade took precedence over all other concerns. The extent to which this has changed is indicated by the fact that even a member of the Politburo, China's top decision-making body, has been blacklisted by Washington for his role in orchestrating the security crackdown in Xinjiang.

The U.S. now routinely relies on sanctions, export controls and other forms of coercion to counter Chinese activities. This has included an unrelenting focus on human rights in Xinjiang, Hong Kong and Tibet; more overt support for Taiwan; and a variety of trade-related restrictions denying China access to microchips and other cutting-edge technology.

Other elaborate sanctions regulations now target Chinese-made opioids, sensitive technologies and access to U.S. financial markets by the Chinese military. The Trump administration even attempted to ban TikTok and successfully shut down the Chinese Consulate in Houston. Chinese entities and nationals are also frequently targeted under secondary sanctions laws for aiding and abetting U.S. foes in Belarus, Iran, North Korea, Syria and Venezuela.

The recent campaign to deny Chinese defense and surveillance agencies the ability to raise money in U.S. markets is multifaceted, and not restricted to sanctions alone. Aside from prohibiting trade in certain classes of Chinese military-industrial complex-linked securities, the U.S. has amended listing rules for Chinese companies. American pension funds have also been instructed to avoid investment from China. 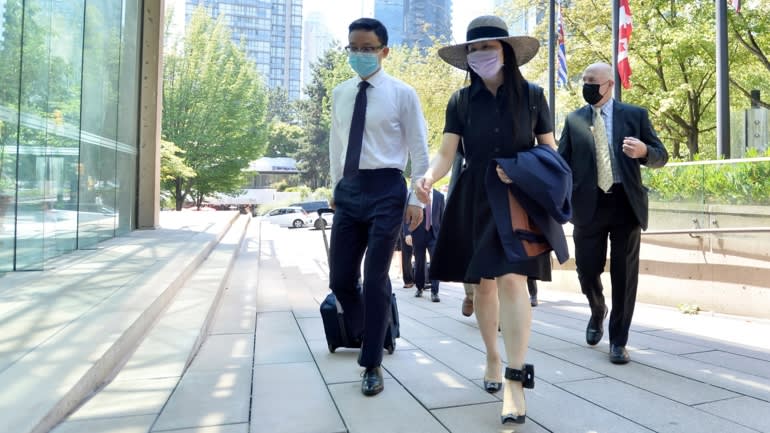 After successfully decapitating communications giant Huawei Technologies and pursuing its CFO's extradition from Canada for allegedly bypassing U.S. sanctions against Iran, the U.S. has expanded its export control laws. It has attempted to choke off the flow of sensitive intellectual property by barring exports to a variety of Chinese state-affiliated companies, including those that it accuses of helping China develop artificial islands in the South China Sea. Washington has also eliminated Hong Kong's special status, acknowledging the virtual end of "one country, two systems."

Concurrently, the Committee on Foreign Investment in the United States (CFIUS) has repeatedly intervened to force Chinese investors to unwind transactions involving acquisitions in sensitive technologies that pose a threat to national security. This has included dating apps, whose data, it was feared, could have been exploited for intelligence purposes.

As reflected in the messaging of the recent Group of Seven summit, America is coordinating with allies in pursuing sanctions goals, including sanctioning entities such as the Xinjiang-based conglomerate XPCC. U.S. pressure was also instrumental in persuading Britain to bar Huawei from further involvement in developing its fifth-generation, or 5G, wireless network. The U.S. has also successfully pressed its allies to adopt CFIUS-like legislation to screen Chinese investments.

In the next few months, the Biden administration is expected to further elaborate its vision of relations with China. Among the areas of focus will be the origins of COVID-19, which has become a fixture in American political debate. The many conspiracy theories surrounding the Wuhan Institute of Technology, once confined to right-wing circles, are now broadly popular.

But the stark new reality is that Washington's frequent reliance on sanctions tools is resulting in diminishing returns. Mimicking the U.S., China is rapidly building up its own domestic legal tools to counter all these sanctions. Targets of American sanctions may soon be able to bring claims in Chinese courts that could pose compliance dilemmas for companies that have exposure to the U.S. and must therefore also comply with U.S. sanctions laws. Financial institutions such as HSBC have been particularly sensitive regarding their precarious position.

U.S. sanctions pressure has also seen led to a strategic convergence between China and Russia, which are both seeking to reshape global affairs on their terms.

Signs of the increased cooperation between the two countries include a new Russian gas pipeline connecting the Chinese northeast, efforts to develop alternatives to dollar-denominated trade, and expanding commercial ties. In the long run, these moves may effectively limit the reach of American sanctions and, ultimately, dilute Washington's global financial dominance in a new era of great power competition.