Five ways to improve the Olympics

Games must do more to include economically disadvantaged nations The Patrouille de France flies during the closing ceremony of the Tokyo Olympic Games and handover of the flag in Paris on Aug. 8: the Olympics are still more about geopolitics and expressions of power than celebrations of human achievement.   © Sipa/AP
CopyCopied

Chandran Nair is the Founder and CEO of Global Institute for Tomorrow and a member of the Executive Committee of the Club of Rome. His latest book "Dismantling Global White Privilege: Equity for a Post-Western World" will be available from December.

During the Olympics, there was worldwide jubilation in celebrating humanity's sporting excellence. Briefly, it felt like global unity had improved.

But as the baton was passed to Paris, with France flexing its economic and military might during the closing ceremony, this feeling faded. It was replaced by the overriding impression that the status quo had not changed at all. The truth is that the Olympics are still more about geopolitics and expressions of power than celebrations of human achievement.

The medal table is the prime example of this, forever dominated by the U.S., Europe and Australia, the West in other words, with the addition of certain East Asian countries in the last few decades, such as China, Japan and South Korea. These nations are "winners" only because they can afford to pour millions into developing their sporting talent.

This tiny group of nations has also secured the privilege to set the rules. Of the 34 Olympic sports, only one, taekwondo, was both founded in and headquartered in a country outside Europe and the U.S.

In this way, the Olympics become yet another extension of one-sided world order, one that has been actively developed to favor the West over the rest. Given this, here are five ways to improve the Olympics and help them retain the spirit of equity and excellence that they were founded on.

First, reinstate a rule of semi-amateur athletes. The original Olympic Charter stated that participants must never have competed for money. That changed in 1986 when professional athletes were given permission to compete.

It is outdated and unreasonable to expect athletes not to exercise their sporting prowess to make a living. But there should be a cap in place: Any athlete earning over $500,000 a year should not be allowed to compete. This would give more opportunities to athletes from economically disadvantaged nations to shoot for a medal.

Second, stop adding sports that only the wealthy can play and win.

There are already a significant number of sporting events that essentially work in favor of richer Western countries. Take swimming, which had a total of 111 medals up for grabs in Tokyo, claimed by only 23 non-Western countries.

Swimming is clearly not the most representative sport, yet three new swimming events were added this year -- and all three were won by either the U.S. or the U.K. How unsurprising.

Western privilege also applies to how certain sports are played. India has the most medals in field hockey of any nation; all won in the first half of the 20th century. But starting with the Montreal Olympics in 1976, the grass was replaced with the synthetic turf pitch as the playing surface.

How many countries can afford to lay synthetic turf pitches? No wonder it took 40 years for India's men's field hockey team to stand on the podium again -- this year, when they secured bronze. Equestrian sports are another example; all 18 medals were bagged by Western countries this year. Likewise for indoor cycling, with many countries like Uganda and Cambodia not even having a single velodrome. 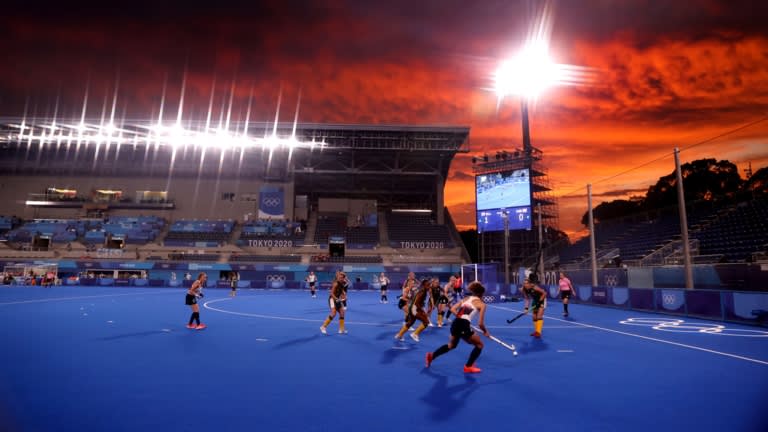 Women's preliminary pool A match of the Tokyo 2020 Olympic Games between South Africa and Great Britain at Oi Hockey Stadium on July 26: how many countries can afford to lay synthetic turf pitches?   © Getty Images

Third, why not include more events that are popular in other countries? Why not add in more long-distance and cross-country running events, which have historically enjoyed winners from many countries, not just a select few?

What about squash or cricket? These are global sports played by non-Western countries across the world. If squash were permitted, Egyptian women would have featured on the podiums, given that the top three female squash players in the world are all Egyptians.

Many non-Western countries also have long histories of indigenous sports and games that do not fit the Western model. These traditions are often submerged unless they are picked up by the West, as is the case with East Asian martial arts.

Given that indigenous communities constitute over 500 million people worldwide in over 90 countries, it is surely important that their sports are represented at the Olympics.

Fourth, what about a special category of medals for migrants? The Olympics make it obvious how wealthy countries attract athletes from poorer countries who become medal winners. This global poaching of talent from economically disadvantaged nations clearly deepens sporting inequality.

It is a complex issue, but perhaps it is time that origin countries receive some kind of recognition. This would not only bring joy to an athlete's country of birth, but it might also encourage more people in that country to take up the sport.

Finally, it is time to rotate the presidency of the International Olympic Committee. There is no hiding that the Olympics were created by the European aristocracy. Yes, they have come a long way since then -- 16 nationalities are represented on the IOC's executive board -- but the IOC is headquartered in Switzerland and all of its presidents have been white men.

As the closing ceremony for Tokyo 2020 wound down, with French power and modernity on full display via its fighter jets and city lights, the truth of the Olympics became clear: These games are for the powerful.

Economically disadvantaged countries are accommodated, but the wealthy nations make the rules, win the Games and reinforce their belief in an unshakable status quo. It is almost as if every four years the Games are held to remind smaller nations of their place in the global pecking order.