For developing world, Belt and Road Initiative is best deal around A bridge construction site of the Bar-Boljare highway, pictured in June 2018: for Montenegro any concerns were far outweighed by the potential economic benefit of the new road.   © Reuters
CopyCopied

China's Belt and Road Initiative program is big -- so big that it scares political leaders in Western countries while at the same time providing them with an easy target for criticism.

The BRI encompasses more than 130 countries. The World Bank estimates more than half a trillion dollars of BRI projects are planned, underway or already complete.

The intercontinental undertaking is of such scale and diversity that motivated critics have not found it difficult to pick out examples of corruption, self-dealing and overleveraging with which to tar the whole enterprise.

Yet much of the criticism of the BRI is misplaced. Many commentators tend to overlook the fact that the BRI often genuinely serves the needs of the developing countries where its projects take place.

As Richard Branson of the Virgin Group, which has infrastructure investment projects in India and other countries, said in 2017: "The Belt and Road Initiative is the only winning infrastructure strategy that can spur growth globally."

Western governments and private companies have themselves not put enough money on the table for infrastructure projects in Asia and other developing regions. The Blue Dot Network recently launched by the U.S. is so small as to make China's case for it; U.S. officials say the new program will catalyze private funding rather than deploy government money.

China's program, on the other hand, is not only the world's largest today, it is the largest in history. It is revolutionizing economic geography. Places that were backwaters -- like the dusty town of Khorgos on the Chinese-Kazakh frontier or the Siberian outpost of Blagoveshchensk just inside Russia's border with China -- can become vital crossroads.

Developing countries that want to get infrastructure going quickly often have little alternative to the BRI. Djibouti wants $11 billion in investment to expand ports and other transport infrastructure. Serbia sought a new bridge across the Danube. 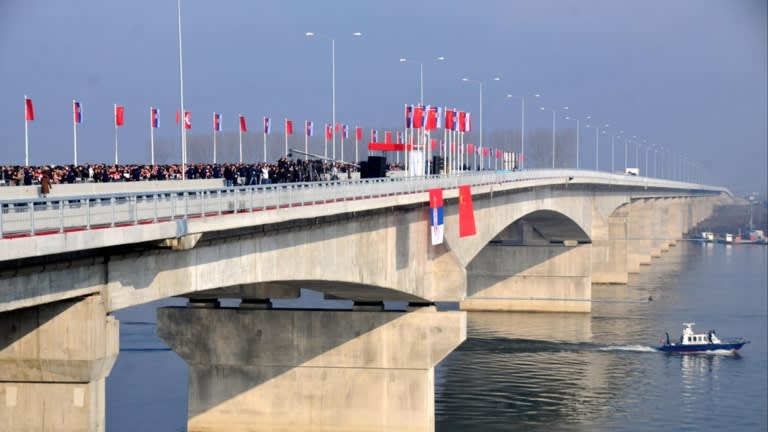 Cambodia wanted industry and tens of thousands of jobs for its Sihanoukville Special Economic Zone. Officials in Thailand and Malaysia have been reluctant to embrace China's terms for joint development of high-speed rail lines, but no other competitive offers have been put on the table.

It is not just that Western pocketbooks look puny compared with the enormous BRI money pot. It is also that the Western funds that are available often come with onerous strings attached that set limits on government spending and debt or require reforms intended to promote democratic decision-making and civil liberties.

China has been willing to invest in projects that Western funders reject, giving developing nations a chance to implement their highest priority investments.

Many BRI projects may be unbankable by Western standards. Even so, they can still be important to the countries involved and make sense to China.

Montenegro was looking for financing for a transnational highway to Serbia. Consultants hired by the EU's European Investment Bank said the project would not attract enough traffic to be economically viable.

China's financing threshold turned out to be much lower, perhaps because the project could help soak up excess industrial capacity and advance Beijing's geopolitical goals. For Montenegro, however, any concern about those issues was far outweighed by the potential economic benefit of the new road.

Critics often lament that participation in the BRI leaves smaller countries dependent on China, which can then gain influence. But fears of such debt traps are overblown.

A study by U.S. research company Rhodium Group of 40 negotiations between China and debtor nations found that Beijing readily wrote off 40% of the value of problem loans. Debt trap concerns should also be dampened following President Xi Jinping's declaration last April that Beijing will ensure the fiscal and commercial suitability of future BRI projects.

Moreover, China is learning from its mistakes. In its negotiations with Mahathir Mohamad, then Malaysia's prime minister, Beijing showed a willingness to restructure its projects in his country to address his concerns about financial sustainability while keeping the developments moving forward.

While critics call China a bully, BRI countries might rather think of China as a generous friend. Most countries concerned welcome tighter ties to China.

Notwithstanding the impact of new coronavirus outbreaks, China has been growing much more quickly than Europe or North America and is transferring manufacturing jobs into other countries at a rapid pace. Its economic miracle is a model many want to emulate.

Xi has said that he wants the BRI to result in "win-win cooperation." Despite the West's resistance, many developing countries are more than willing to take him at his word.

If Western governments want to offer a serious alternative to the BRI, they will need to significantly scale up development aid budgets and consider loosening up governance and investment standards. They will have to tailor their offerings to appeal to developing countries rather than simply take their welcome for granted.