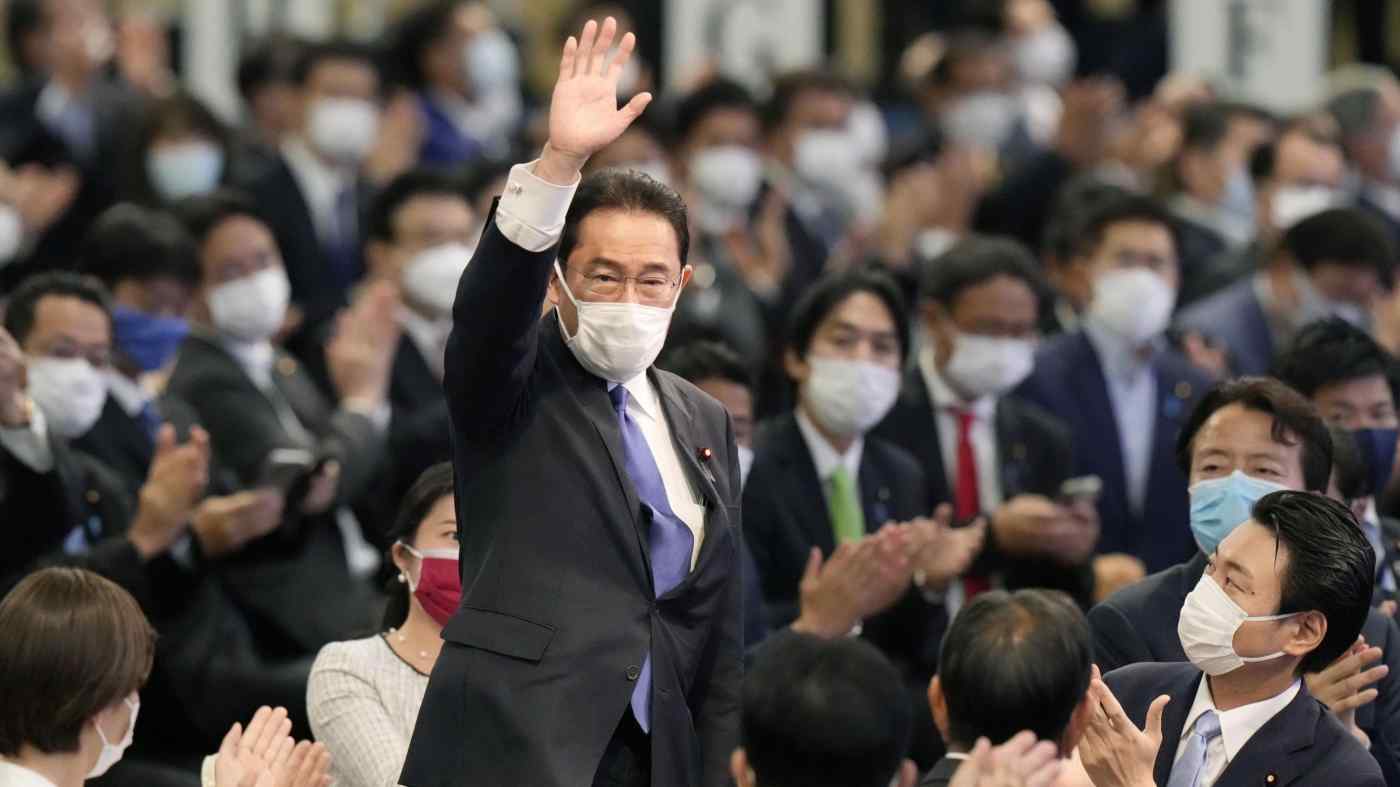 Fumio Kishida gestures after he is elected as ruling Liberal Democratic Party president on Sept. 29: he will depend heavily on the conservatives to govern.   © Kyodo
CopyCopied

Tobias Harris is a senior fellow at the Center for American Progress, an independent, nonpartisan policy institute. He is the author of "The Iconoclast: Shinzo Abe and the New Japan."

After Fumio Kishida finished a distant second in the race to succeed Shinzo Abe as leader of the Liberal Democratic Party in September 2020, Makoto Koga, the outgoing honorary chairman of the moderate Kochi-kai faction, had some harsh words for his protege.

"A Kishida administration must be created. But making a Kochi-kai administration is the first thing. If this has become too difficult for Kishida, the second or third candidates are fine," Koga said.

Koga's remark captured the conventional wisdom after Kishida's defeat at Suga's hands. Having failed to take advantage of the opportunity presented by Abe's exit -- and after having failed to run as a moderate alternative to Abe in 2015 or 2018 -- and with no position in Suga's government or party executive, it seemed that Kishida's moment had passed.

But on Wednesday, Kishida proved his doubters wrong, unexpectedly edging out popular favorite Taro Kono by one vote in the first round before defeating him by a wide margin in the runoff.

It seems that Koga got his wish after all. Japan will, for the first time since Kiichi Miyazawa in 1993, have a prime minister from the Kochi-kai, the storied faction of Hayato Ikeda and Masayoshi Ohira that had seen its fortunes wane as the LDP's right-wing has grown in strength.

However, it would be a mistake to herald Kishida's victory as necessarily marking the arrival of a more moderate LDP. The reality is that Kishida depended on the direct and indirect support of the LDP's right-wing to prevail over Kono. The right-wing, and Abe, its effective leader, still wield considerable influence over the LDP and will shape the direction of a Kishida administration.

Perhaps no decision was as consequential as Abe's choice to throw his weight behind Sanae Takaichi, a longtime member of Abe's inner circle. With the former prime minister's support, Takaichi became a viable contender, attracting the support of conservative lawmakers and even running neck-and-neck with Kishida for the votes of the LDP's rank-and-file members.

Takaichi's surprisingly robust candidacy all but ensured the vote would go to a runoff, in which Kishida, who enjoyed more support from LDP lawmakers than Kono, would win easily. In the end, Takaichi not only guaranteed a runoff but also embarrassed Kono when she received more votes from LDP lawmakers in the first round. Sanae Takaichi delivers a speech for her election campaign on Sept. 17: Takaichi embarrassed Kono when she received more votes from LDP lawmakers in the first round.   © AP

Kishida also benefited from the LDP right's decision with the support of right-wing media outlets to concentrate their fire on Kono instead of Kishida.

Despite Kishida's reputation as a dovish liberal, the LDP's conservatives saw Kono, who has staked out liberal positions on social issues like same-sex marriage, allowing spouses to have separate surnames and the possibility of a woman inheriting the imperial throne, as the bigger threat.

They also worried about Kono's long-standing opposition to nuclear power, belittled his plans for pension reform as reminiscent of a half-baked Democratic Party of Japan scheme, and suggested that he would be soft on China.

Even as right-wing politicians mobilized against Kono, Kishida sought to ease whatever concerns they might have about him.

He staked out conservative positions on gender and sexual identity issues; expressed his eagerness to revise the constitution while in office; embraced tougher policies toward China; and voiced his support for Japan's acquisition of capabilities that would enable it to strike targets in neighboring countries.

Furthermore, despite declaring an "end to neoliberal policies," he gave few indications that he would break with Abe's economic legacy. In a sign of Kishida's acceptability to the LDP's right-wing, Kishida and Takaichi announced shortly before the vote that they would back each other in the second round.

This alliance may not be as strange as it might seem. Despite Kishida's reputation as a liberal -- explicitly stating in 2017 that Abe was "conservative and hawkish" while he was "liberal and dovish" -- the difference may be more about political temperament and style than policy.

During the campaign, Kishida stressed his ability to listen to different opinions and hearkened back to Kochi-kai founder Ikeda's politics of "politeness and humility, tolerance and patience." Ultimately, Kishida has demonstrated that he is by no means an ideologue and is capable of adapting to political circumstances.

The upshot is that Kishida is unlikely to break with Abe's legacy. He will depend heavily on the LDP's conservatives to govern. Takaichi will likely receive a prominent position in the new government, and so too will Akira Amari, another Abe ally who backed Kishida and was one of Kono's most vocal critics.

Kishida has talked of balance -- he will likely try to include Kono in the cabinet or LDP executive in some capacity -- but the campaign revealed that the party's center of gravity has shifted to the right.

This is not the Kochi-kai administration that Koga, a leading critic of Abe throughout his tenure, had hoped for. Rather, the leadership election has shown that the LDP very much remains Abe's party.