If one believes the latest opinion surveys, Philippine President Rodrigo Duterte is the world's most popular leader.

By one count, as many as 92% of Filipinos appear to be satisfied with his leadership despite the economic meltdown triggered by COVID-19 and the worst pandemic outbreak in the region. The real tragedy of Duterte's rule, however, is his inexplicable failure to translate his unprecedented power and mind-bending popularity into effective governance.

After the complete decimation of the opposition in last year's elections, and the more recent shutdown of the country's biggest liberal media outlet ABS-CBN, the Filipino strongman is ostensibly overseeing a one-party regime, if not a one-man show. Duterte can virtually do as he pleases.

Plagued by chronic infighting among key allies, especially in the legislature, the reality is that Duterte's rule has been racked by one crisis after another, among the most chaotic in Philippine history. Lately, his squabbling allies almost paralyzed extremely crucial budget deliberations with potentially devastating impact on the country's fragile economic recovery.

Duterte's enduring popularity -- and his rise to power -- is built on a carefully curated image of him as a compassionate, decisive, and strong-willed leader who has shaken up Manila's feckless political establishment.

With his distinct style of raw and entertaining "performative governance," backed by legions of online propagandists constantly highlighting the president's real and imagined achievements, Duterte has been largely shielded from criticism through countless scandals and government blunders.

Duterte has also enjoyed other unique advantages, including the near-100% support from his home base in Mindanao. Even more crucial has been the climate of fear created by his scorched-earth drug war, which has claimed thousands of lives among working-class urban communities.

Still, while it's hard to overstate Duterte's advantages, the Filipino leader has repeatedly struggled with vicious infighting among his lieutenants. This includes the recently deposed Speaker Alan Peter Cayetano, Duterte's former vice-presidential running-mate. These quarrels not only expose Duterte's tenuous hold over his raucous political coalition. They severely undermine the country's economic prospects amid the worst contraction in contemporary Philippine history.

Back in 2018 Duterte almost walked out of his own State of the Nation Address after former president-turned Congresswoman Gloria Arroyo launched a surprise legislative coup against then-Speaker Pantaleon Alvarez, another Duterte ally.

Months of bitter infighting followed, culminating in a historic failure to pass the 2019 budget on time, with the massive disruption to government appropriations leading to a 13% fall on key infrastructure spending and undercutting economic growth.

After the National Economic and Development Authority warned of a hit to gross domestic product of up to 2.3% in 2019, growth in the Philippines fell to an eight-year low 5.9%, well below the government's 7% to 8% target.

Nevertheless, Duterte's allies swept the 2019 midterm elections in what I called the "Monday Night Massacre" with the president's opponents suffering their worst electoral performance since the end of World War II.

But instead of leading to a more stable and effective government, electoral success unleashed an unseemly scramble for spoils that saw the aforementioned Cayetano rewarded with the prized Speaker's gavel as part of a power-sharing agreement with another ally, Lord Alan Velasco.

Never a secure partnership, the two camps soon fell out, publicly accusing each other of treachery and other forms of skulduggery. After Cayetano maneuvered to extend his tenure beyond an earlier agreement, Velasco' camp, backed by Duterte's powerful daughter Sara, moved to oust him. 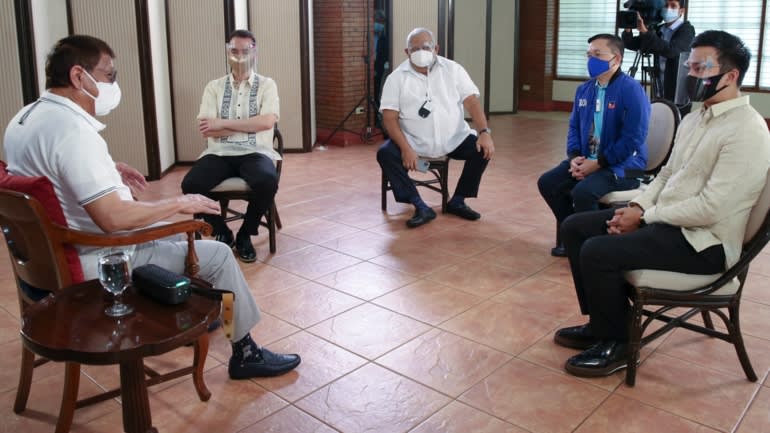 Duterte. left, talks with the new house Speaker Velasco, right, and his predecessor, Cayetano, second from left, at the Malacanang palace on Oct. 13: the Filipino leader has struggled with vicious infighting among his lieutenants.   © Malacanang Presidential Photographers Division/AP

The crisis reached a critical phase when the tit-for-tat rivalry threatened to yet again disrupt budget deliberations, this time as the country struggled through the worst economic crisis in recent memory. After the senate warned of a month-long delay in passing the budget, Cayetano seemingly staged a faux resignation just so his allies could reelect him as their boss.

Following a botched mediation attempt hosted by Duterte at Malacanang, the Philippines equivalent of the White House, a visibly perturbed president couldn't contain his growing frustration. "Either you resolve the issue... and pass the budget legally and constitutionally, otherwise I will do it for you," Duterte lamented in a surprisingly passive-aggressive speech that betrayed his own growing sense of impotence.

Apparently sensing her father's weakness Sara Dutere -- currently the Davao City Mayor, her father's old job -- not only stepped up as peacemaker but is now considered a hot favorite to succeed her father as president.

After Sara Duterte successfully pushed for a new round of votes in congress, Velasco -- a Duterte family friend and loyal ally -- has now been installed as speaker. Back in 2018, Sara Duterte had also played a pivotal role in the ouster of then-Speaker Alvarez, who, just like Cayetano, had sought to use the speaker's chair to build his own independent base in the legislature.

An embittered Cayetano has not gone quietly, accusing his rivals of "unprecedented" desecration of the institution of Congress that will enter "the Guinness Book of World Records." For critics of the administration, this brazen power struggle has appeared as yet another brawl between crocodiles and alligators, or buwayas to use the pejorative Filipino word for traditional politicians.

Many wonder whether Duterte's allies can get their act together, or, as in the past, revert to destructive factionalism as an aging president enters the twilight years of his presidency. At stake is not just Duterte's legacy, but the Philippines' struggle to overcome an existential crisis.