Germany's painful wriggle between China and the US

Navigating between the powers has become a headache for Berlin Spare a thought for Germany, which finds itself uncomfortably perched between the United States, the oldest extant superpower and Berlin's most important security guarantor, and the People's Republic of China, the world's newest superpower and Germany's "comprehensive strategic partner."

The country's difficulties are the result of its conflicting preferences -- for the U.S. security umbrella and Europe's "strategic autonomy," for liberal democratic principles and economic prosperity that owes a great deal to China. And it should not expect Joe Biden as U.S. President to solve these conflicts for it.

"Equidistance" is not a term Germany used in its great-power diplomacy in the past. The country's double embeddedness in the Western alliance system through European integration and in the trans-Atlantic alliance was axiomatic. Even Donald Trump's open disdain for Germany and Chancellor Angela Merkel could not destroy the German public's goodwill toward America.

While most Germans see close bilateral relations with the U.S. as being more important than with China, there are signs of ambivalence seeping into German attitudes. And while many Germans believe that bilateral relations will return to normal under the incoming Biden administration, this does not mask two major foreign policy dilemmas that now confront Berlin.

The first concerns Washington's demands for a generally tougher stance toward China and a decoupling of economic ties that have grown close and very lucrative, especially, for Germany's car industry. China is Germany's largest trading partner -- shipments totaled about 200 billion euros in 2019 -- and it became Germany's most important export market in the second quarter of 2020.

On the back of increasingly close and diversified commercial ties, Germany and China have developed a close political relationship, which they designate a comprehensive strategic partnership that includes about 80 specific high-level dialogue arrangements for bilateral political consultations.

German public opinion about China has declined considerably in recent years -- polls show that two-thirds of respondents have a negative view of China -- and German business has also grown disenchanted with Beijing's increasingly robust state interventions in favor of Chinese national champions. But neither group seriously wants to sever the many and varied ties between the two countries.

Take the world's largest inland port of Duisburg, a key European transit point for goods moving to and from China along the New Silk Road, China's Belt and Road Initiative. For Duisburg's Social Democrat Mayor Soren Link, who has gone out of its way to cultivate ties with China, reducing economic dependence on China and enhancing resilience against supply disruptions or economic coercion would be painful and costly, economically and politically -- and cause considerable resentment among local voters. 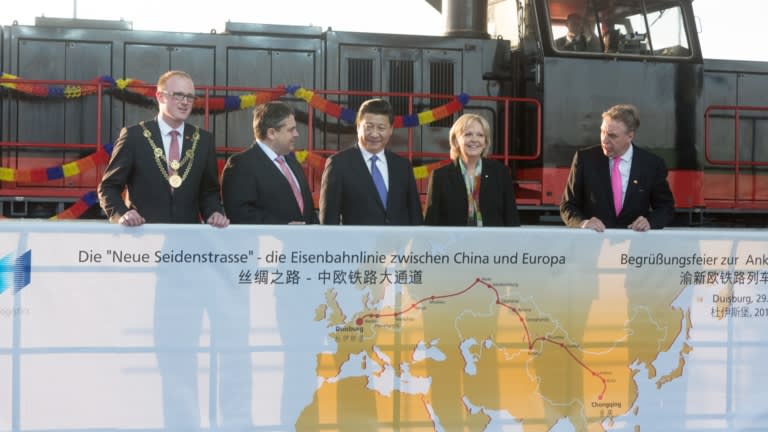 Duisburg's Mayor Soren Link, left, and Chinese President Xi Jinping, third from left, attend the arrival ceremony of the container train from the Chinese city of Chongqing at the Logport terminal in Duisburg in March 2014.   © Getty Images

Just as Germans can see good things in China along with the bad, they can see bad things in the U.S. along with the good too. While many Germans who came of age after World War II share a sense of gratitude and admiration for an often idealized America, many also quietly came to harbor a deep-seated anti-Americanism. The Vietnam War catalyzed this romantic, anti-modernist resentment and German unification gave it another push, with many East Germans having been taught to see the U.S. as the enemy.

The second dilemma facing Berlin is that between leadership and its discomfort. Polls by the Korber Foundation suggest that 82% of Germans would prefer to remain neutral in any new Cold War between America and China -- and only 12% would side with Washington and 3% with China. This speaks volumes not only about the difficulties of navigating between the two powers, but also about Germany's reluctance to step up, a reluctance brutally exposed by its failure to honor repeated pledges to its NATO partners to spend 2% of gross domestic product on defense.

Germany's traditional response to the dilemma of leadership has been Europe -- or more exactly, to "lead from behind" within Europe. This was all the easier given pressure on Europeans to stick together. During the Cold War, this came from the Soviet threat and from the U.S. response to that threat, promoting European integration. The U.S. maintained this stance beyond the end of the Cold War until Donald Trump came into office. As it saw its power and influence relativized by the rise of China, its geopolitical focus shifted to Asia.

This means Washington will no longer be able to hold Europe together the way it did over the last three-quarters of a century. Under President Barack Obama, the cracks were already becoming apparent.

Four years on, Berlin will have to step into the United States' traditional role as Europe's pacifier and integrator. And it will have to forge a truly united European Union capable of carrying its weight in the alliance with the U.S. and other liberal democracies in Europe, the Indo-Pacific, and beyond. This is a role for which Berlin is as yet badly prepared.