Grab and Gojek must show flexibility to survive

Started as ride-hailers, superapps will need different routes to sustainability

Grab and Gojek realized that ride-hailing services were not the profitable long-term future of their businesses. (Photo by Ken Kobayashi)
CopyCopied

Headlines often dub Grab and Gojek, which both started as ride-hailing services, rivals locked in Southeast Asia's superapp race, given the multiplicity of services they now provide, from food delivery to digital payments.

While neither has yet reached WeChat's level of ubiquity in China, both have demonstrated the power of entering the right market early on and have outlined compelling growth strategies for the region's technology startups.

But recently, the superapp race has entered a new chapter. Tech unicorns are under pressure to show profitability, and the growth-at-all-costs strategy is coming up short. In response, both contenders are adjusting their paths to changing investor expectations, and have even discussed merging.

What investors and consumers now want to know is whether both companies have the flexibility to endure for the long term.

This race began with ride-hailing, Grab in Malaysia, Gojek in Indonesia, which brought users onto technology platforms in an unprecedented way and drove the region's technology market. It was a high-frequency activity and met a compelling market need in urban areas with a lack of mass transport options.

In those days, venture-backed startups could afford to set aside the high costs of operation as long as it allowed them to build the user base they needed to pull in more cash to grow bigger. With this confidence, Grab, Gojek and international rivals like Uber made inroads in Southeast Asia.

The entry of more players into the market, like EasyTaxi in Vietnam, weighed on already low margins and the market became, and remains, locked in a battle powered by cash from investors funding subsidies for passengers. Grab, Gojek and others realized that ride-hailing services were not the profitable long-term future of their businesses.

Gojek played to its strengths and focused on a motorbike ecosystem of services in Indonesia, rather than cars or ride-hailing per se. Grab optimized matching and operating efficiency on its platform, while experimenting with other services, eventually hitting gold with food delivery and financial services. Both now operate in multiple Asian countries. 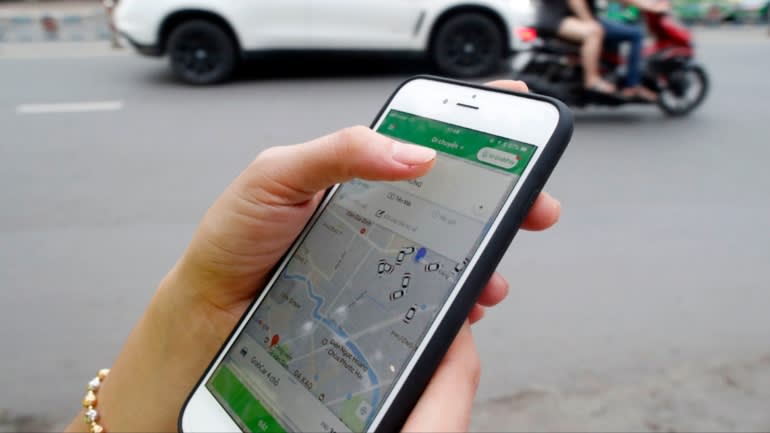 A customer uses the Grab app on her smartphone in Ho Chi Minh City: the company optimized matching and operating efficiency on its platform.   © Universal Images Group/Getty Images

Yet neither company can escape ride-hailing and its thin or even nonexistent margins.

Its role attracting customers, acting as their first experience of the app and then retaining them means it cannot simply be taken out of the equation. Even though competition continues to flood the space, both platforms have established near-indelible brand equity and leadership with the service in the region, and that bears significant value.

Nevertheless, the difficult economics of ride-hailing and the shift to a more sustainable bottom line require both companies to change focus. Given their different approaches to growth, their focuses will be different too.

Grab's rapid early expansion means that the main business lines for the platform will be those that provide greater financial efficiency and profitability to sustain this scale.

For Gojek, which has only recently started its regional expansion, its focus will be more on businesses that will establish a strategic presence in each market, while at the same time maintaining its leadership at home.

What founders of technology platforms can take away from the superapp race is the need for a strategy to achieve self-sustaining value creation. In other words, they need a plan for users to stay engaged on the platform for the long term.

They can focus on a particular business and extend into related lines to secure long-term users, or they can win as many users as possible and try to flip them into higher-value businesses. But they cannot be too single-minded and must be prepared to adapt.

Regardless of the approach, it is important for a technology platform to start the journey right. Tech startups need persistence and focus to pursue a single business line or market early on. If the market does not turn out to be "right" or sustainable, these companies should have the flexibility to adapt. Now is Grab and Gojek's time to prove that they can.