Governments must handle slowdown carefully to avoid rise of populism People hope that their children's lives will be far better than theirs.   © Reuters

Since the Brexit referendum and the election of Donald Trump as U.S. president in 2016, the rise of populism, nativism, anti-globalism, anti-liberalism and the "retreat of democracy" is much talked about.

One way to understand this turn is to look at who did well under globalization and who did not, and whether people's expectations of a better life are being met or not. Countries that fail to maintain solid economic growth and improve the standard of living of their people become vulnerable to nasty politics. Nasty politics now thrive in some parts of Western Europe and North America, and may do so in East Asia, albeit in different forms.

Japan's per capita GDP only grew from 100 to 106, the worst performance among the OECD countries. There was talk of the "Japan Disease" in those days. Japan was held up as an example of what not to do when managing the economy.

Japan's performance remained lackluster. Its per capita GDP expanded from 100 to 104, on a par with the U.S. and Canada but better than the U.K. and France. We witnessed the Japanization of North American and West European economies, even though per capita GDPs have grown more decently in advanced countries in the past several years.

When their expectations were not met, they became unhappy, sometimes angry, at their governments and "elites," and viewed immigrants as threats to their livelihoods and cultures. Hence the rise of anti-globalism, nativism and racism.

Nothing of this sort happened in Japan because the Japanese have come to accept the stagnation of their living standards as the "new normal" and because they witnessed the self-destruction of the populist movement under the Democratic Party of Japan-led government in 2009-2012.

More important for our purpose is the revolution in rising expectations in Asia. East Asian countries have done well economically in the post-cold war years. It is true that the economic crisis in 1997-98 devastated such countries as Thailand, Indonesia, South Korea and Malaysia.

Even more important, all these countries did better in the second 10-year period from 2006 to 2015. Per capita GDPs expanded by 26%-54% in Thailand, Indonesia, Malaysia, the Philippines and Vietnam, or 2.8%-6% a year, while China's per capita GDP, growing at 12.3% a year, more than doubled once again in the same period.

This trend continues. Per capita GDPs in major Southeast Asian countries are growing at 3.9%-6% a year, even though the per capita GDP growth in China declined to 6.4% a year in 2016-1018.

In other words, the standard of living in all these countries has improved enormously within the space of a generation. This has understandably given rise to optimism. People expect that their lives will be better in the coming years and hope that their children's lives will be far better than theirs.

The question -- and biggest challenge for Asian governments -- is whether these expectations can be met. There are signs that the Chinese economy is slowing down, in part because of the U.S.-China trade war.

Although countries such as Vietnam and the Philippines are positioning themselves to benefit from the reorganization of transnational supply chains now under way, there is a good chance that the economic slowdown in China and mounting political and economic uncertainties elsewhere will adversely affect economies in the region in the near future. 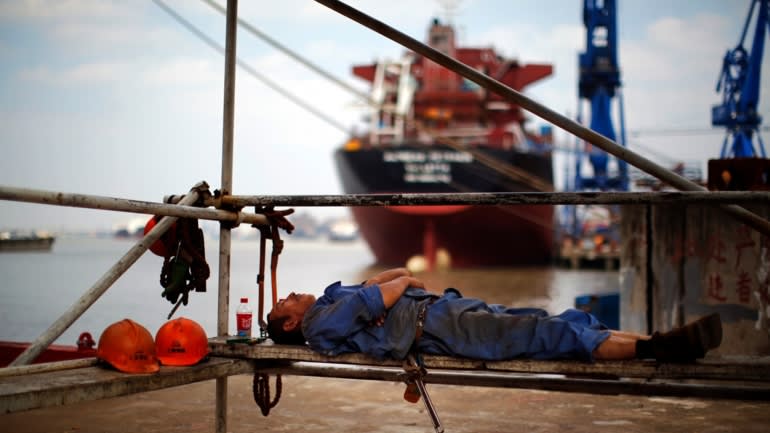 There is a good chance that the economic slowdown in China will adversely affect economies in Southeast Asia in the near future.   © Reuters

Besides, there remain huge gaps between urban centers and provinces and between middle- and lower-income groups.

Fearing the poor and resisting redistribution policies, middle-class people support Philippine president Duterte's war on drugs and voted for the Prayuth government in Thailand. The frustrations of the poor manifested themselves in their support for Islamist and nationalist politics in the recent presidential election in Indonesia.

Should an economic downturn hit these countries and people realize that their expectations for better life may not be met, they will hold the government responsible. Polarizing class divisions may combine with identity politics to produce an East Asian variation of nasty politics.

Takashi Shiraishi served as president of the National Graduate Institute for Policy Studies 2011-2017.