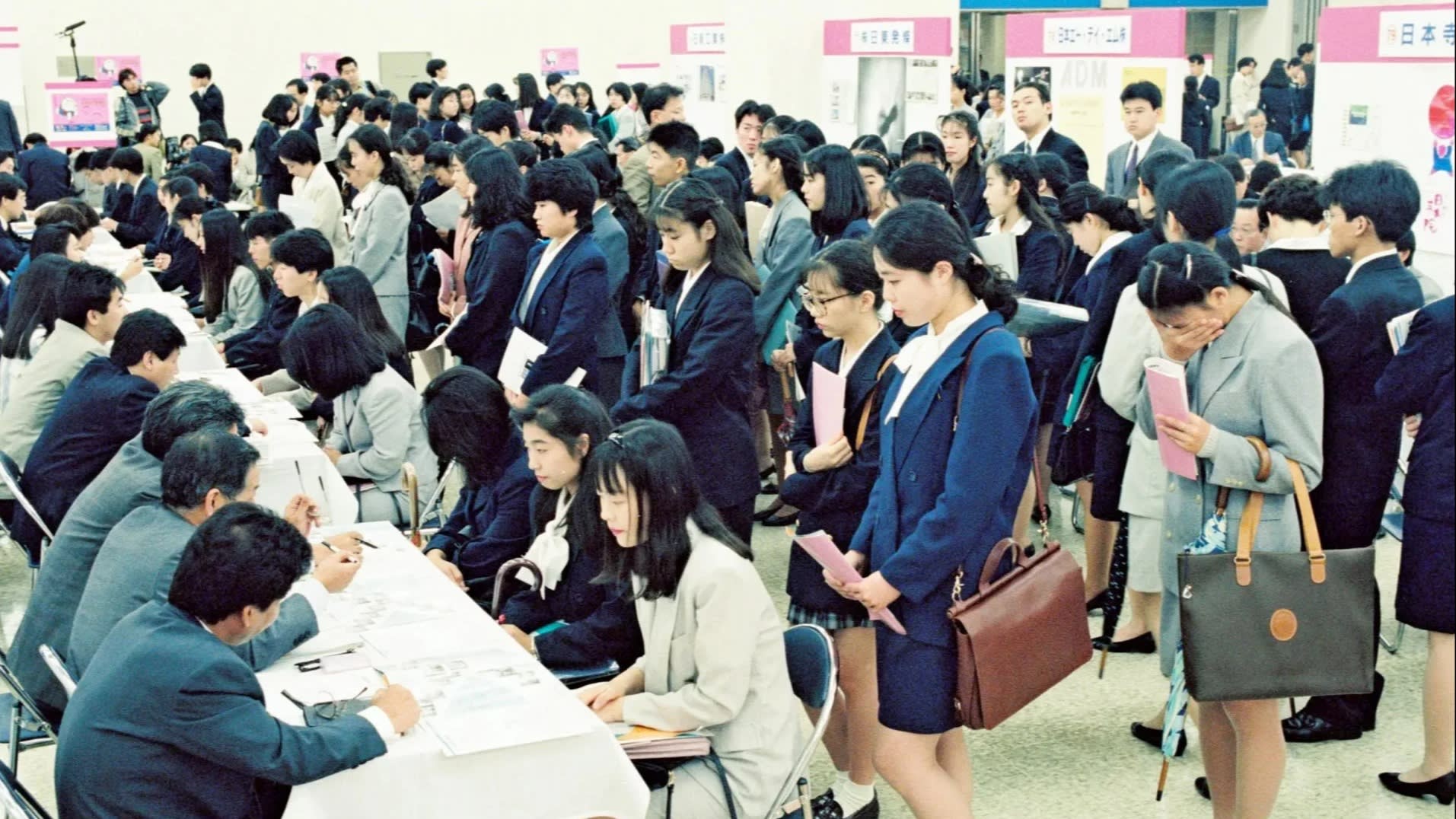 University students attend a career fair in Tokyo in October 1993: the unlucky members of the lost generation did not bring about their fate on their own.
CopyCopied

In August, the Japanese government announced it would assist one million members of the so-called "lost generation" -- around 17 million people now aged between their mid-thirties and mid-forties -- with their job search by providing subsidies and commission-based bonuses to private recruiting agencies.

The lost generation entered the workforce in the decade starting from the middle of the 1990s, just as the domestic economy nose-dived when the bubble economy burst. This threw them into a glacial job market, which supplied another name, the "glacier generation" -- from hyogaki sedai, or "ice age" in Japanese.

Indeed, like a ship heading toward a glacier, not noticing the size of the problem until it is almost too late to change course, Japan's government has struggled to find urgency of action -- until now. The government's response to the lost generation, if successful, may bring benefits for the entire country.

The lost generation was unable to secure entry-level positions at large companies, the ticket to middle-class life, so many of them became trapped in a succession of unstable, low-paid positions -- or simply opted out of the labor market, ending up financially dependent on their parents.

In 2018, 53% of 35-44-year olds were regularly employed, six percentage points lower than in the 25-34 cohort. "Adult in a kid's room" recently became a popular word online to describe those members of the lost generation who continue to live at home well into middle age.

The situation will eventually become a crisis as old age is around the corner for the lost generation: in 2040, its older members will be approaching 70. The burden they place on the national budget from 2040 to 2070 will be compounded by other factors: many are financially ill-prepared and are less likely to be supported by family, having had fewer children.

It is therefore likely that the lost generation will require much more government welfare support per capita. As early as 2008, the Nippon Institute for Research Advancement estimated that the generation's low pay had left them with inadequate pensions, potentially leaving a shortfall of an additional 20 trillion yen ($185 billion) in aggregate, which the government will need to fill.

The crisis of the lost generation is not purely economic. It is in fact a challenge about whether Japan can define itself as a truly inclusive nation.

First, this is a wake-up call to change Japan's mentality around perceptions of self-responsibility. Deregulation and the focus on professional meritocracy introduced in the early 2000s may have gone too far.

The notion that an individual alone is responsible for their successes or failures in life breeds a society that turns a blind eye to the unlucky, dividing everyone into winners and losers. Deregulation and the focus on professional meritocracy may have gone too far.   © Reuters

In fact, as Nassim Nicholas Taleb, the author of "Black Swan," argues, the role of chance in career and in life is grossly underestimated. Japan needs to arrive at a broad consensus that the unlucky members of the lost generation did not bring about their fate on their own, but rather were victims of external forces. As a society, it is our moral duty, not just an economic imperative, to help them.

Once this understanding is established, we need to make greater efforts to reintegrate the members of the lost generation. We should not underestimate this task's complexity.

While it is tempting to lump them together as a generation, they are a collection of unique individuals and not all will want to be confined to the few industries with an imminent labor shortage that the current government plan suggests.

The longer each sits out of the market, the harder it is for them to rejoin. In addition, many have parents or children to look after, which makes it challenging to meet the demands of a regular employment schedule. Any opportunity to work must be evaluated according to individuals' real-world circumstances.

Just as we activate these initiatives in the short-term, it is also important to learn the long-term lesson of the lost generation. If an economic downturn were to hit again, how would we prevent a repeat for a new generation?

However, those of us already in the regular workforce are not necessarily safe from such misfortunes. With technology changing fast and AI advancing, any of us could become obsolete tomorrow. Again, luck plays a large part.

To maintain our financial freedom, we need to broaden the scope of Japan's mechanisms for training people and the safety net it provides.

Nobuko Kobayashi is Partner and Managing Director, Ernst & Young Transaction Advisory Services Co ltd. The views reflected in this article are the views of the author and do not necessarily reflect the views of the global EY organization or its member companies.