Tiananmen without the massacre 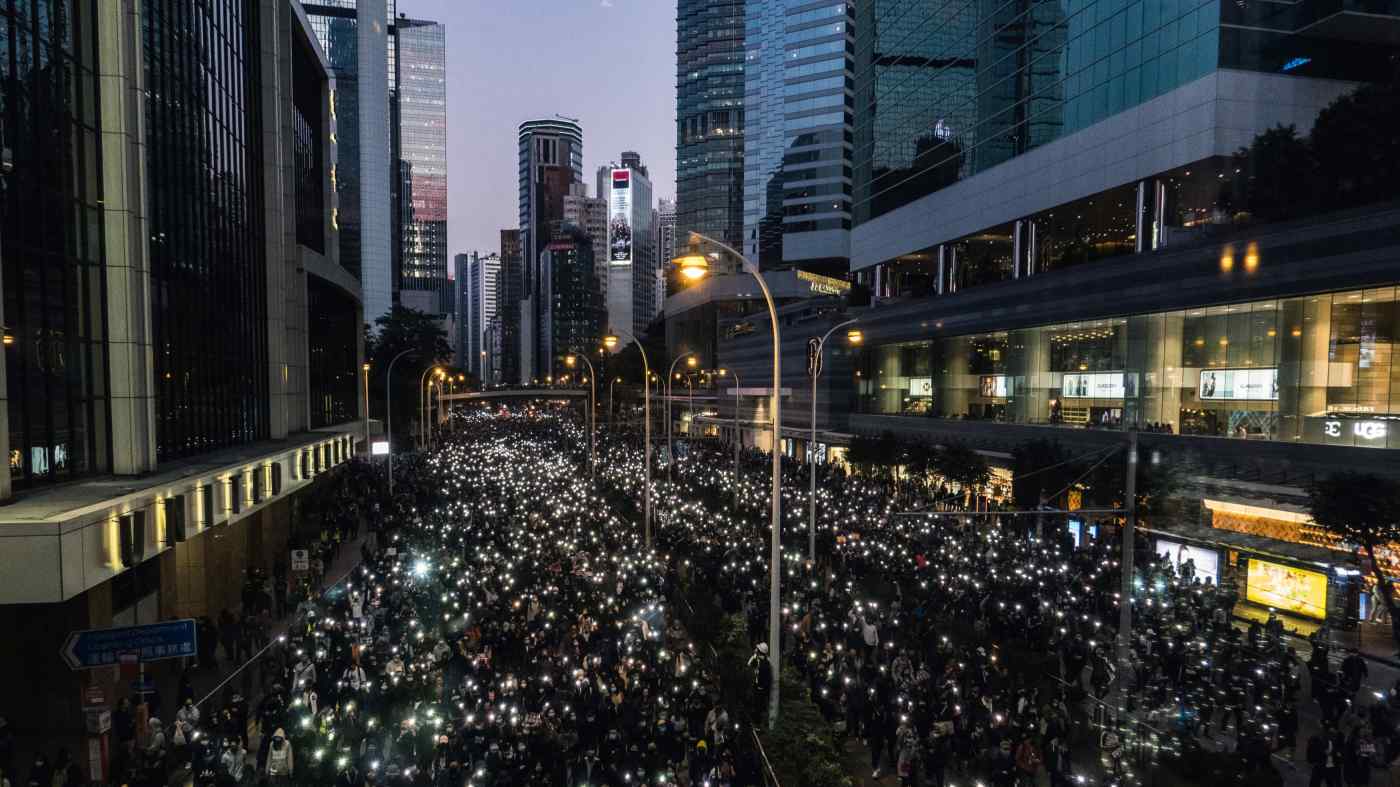 Demonstrators shine lights from their smartphones as they march along Queensway on Dec. 8, 2019.   © Clicks Images/Getty Images
CopyCopied

Jeffrey Wasserstrom is Chancellor's professor of History at the University of California, Irvine, and the author of Vigil: Hong Kong on the Brink.

What a difference a year can make in a city. This thought strikes me as I reflect on the contrast between the situation in Hong Kong today, as a harsh chill has fallen on the metropolis, and how things were when I last visited the city twelve months ago.

The then and now contrast is so stark that I feel it can be compared to the difference between Beijing in the spring of 1989 when a massive crowd gathered at Tiananmen Square, and the Chinese capital in the spring of 1990, as local authorities worked overtime to block any commemoration of the anniversary of the June 4 massacre.

The high point of my last visit to Hong Kong was witnessing a giant demonstration on Dec. 8 with over 100,000 people joining the officially sanctioned march and choruses of "Glory to Hong Kong" filling the air. Now, it been months since any protest has received official approval, and it is unclear if any will ever be approved again. To sing "Glory to Hong Kong" is to risk arrest, as a harsh new National Security Law imposed by Beijing treats all strong expressions of local pride as potential evidence of subversive "separatist" tendencies.

Each week brings new reports of reprisals against activists. This month alone Joshua Wong, Agnes Chow and Ivan Lam, all in their twenties, started prison terms for taking part in nonviolent acts of civil disobedience. Ted Hui, a moderate member of the pro-democracy camp was driven into exile. The gadfly journalist Jimmy Lai is being held without bail ahead of an April trial date. All of which adds up to Hong Kong having experienced its own version of the post-Tiananmen crackdown. A group of music performers plays "Glory to Hong Kong" in flash mob inside a shopping mall at Kowloon Tong in September 2019: now, to sing the song is to risk arrest.   © Reuters

There are crucial differences, of course, between Beijing thirty years ago and Hong Kong now. One feature of the Hong Kong chill is the attacks on quasi-democratic institutions. There were no elections to cancel or elected officials to disqualify in Beijing in 1990. And in Hong Kong there has been no direct equivalent to the June 4 Massacre, when soldiers killed large numbers of people in a 24-hour period.

And yet, it is striking to me how many repressive moves made in Hong Kong this year -- from mass arrests to efforts to block gatherings to honor the sufferings of those who were harmed by police or thugs last year or took their lives in acts viewed as political suicides -- are analogous to, if not the same as, the repressive moves in Beijing of three decades ago.

Even without the tanks, the 1989 crackdown on the mainland would have been worthy of outrage. And even with few martyrs but many people traumatized, the current crackdown in Hong Kong is equally worthy of condemnation.

Hong Kong's story is unique, but there are also echoes of the repression in Taipei in 1947, when the Nationalist Party stamped out protests and decades of martial law began. And in Warsaw in late 1981, where another repressive regime imposed martial law and another famous dissenter faced the same excruciating choice between prison and exile.

Yes, the death toll has been lower in Hong Kong than in those other cases, but eyes blinded by bean bag shot, and lungs ravaged by tear gas set off in enclosed spaces are hardly minor things. It is also true that activists elsewhere have been handed much longer sentences in other times and places. But it is no small matter that Joshua Wong will have to spend more than a year in prison for speaking at the kind of event that in the past might not have led to any arrests in Hong Kong, and that Agnes Chow has been sentenced to close to a year in prison simply for joining a crowd in shouting slogans.

The darkness is not falling in Hong Kong in the same way and at the same pace that it fell in Beijing, Taipei, and Warsaw. But there is a sense among local residents of room for maneuver disappearing, freedoms being stifled, a curtain coming down.

There is also a feeling in Hong Kong that changes for the worse are coming so fast -- at "warp speed" as journalist Mary Hui of Quartz put it in a Tweet in July -- that the overall experience is disorienting as well as distressing. This is a poignant way to think about the situation, even if the tightening of controls on Hong Kong can seem gradual to those with only a passing interest in the city who come across one headline one week, another the next.

There is no single image of the repression in Hong Kong that seems to sum it all up the way an iconic shot of a man standing before a line of tanks crystallized the situation in Beijing when the first anniversary of the June 4 Massacre drew near. It is still important, though, on this first anniversary of the last big Hong Kong march of 2019 for international audiences to be attentive to the way that darkness has been falling on a great city associated with glittering lights.