How BTS fans became a force in US politics 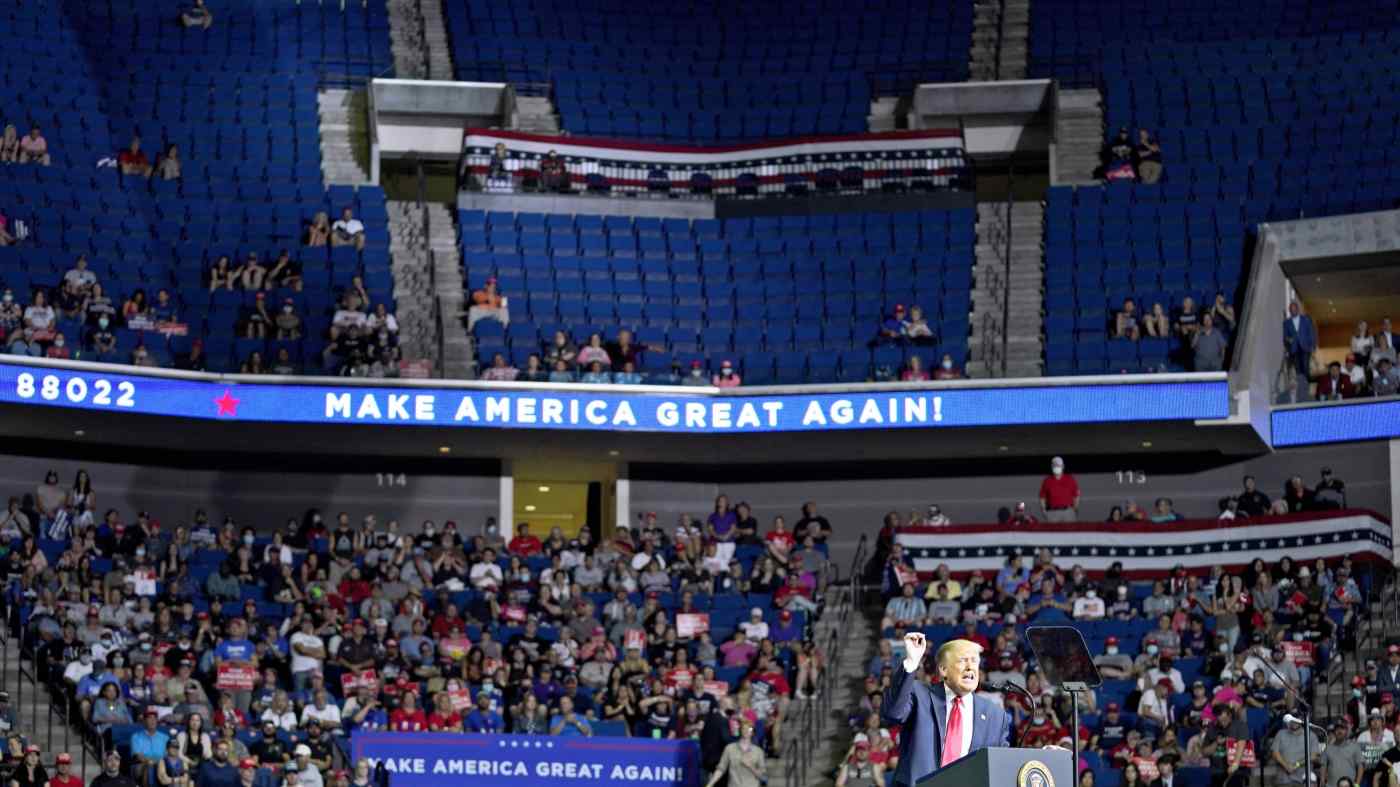 Donald Trump speaks during a campaign rally at the BOK Center in Tulsa on June 20: only 6,200 went through the turnstiles.   © AP
CopyCopied

John Lie teaches at the University of California, Berkeley, and is the author of "K-pop: Economic Innovation, Cultural Amnesia, and Popular Music in Contemporary South Korea."

U.S. President Donald Trump's rally in Tulsa, Oklahoma, on June 20 imploded beyond his enemies' wildest dreams. Over a million people registered electronically and perhaps 100,000 were expected to show up -- but only 6,200 went through the turnstiles at the BOK Center.

Were leftist protesters blocking the entrance, as some in the Trump camp alleged? Did Oklahomans and their neighbors worry about COVID-19 transmission? One unlikely answer, as the media have reported, were Korean pop music, or K-pop, fans, who had decided to make the event a flop by applying for tickets then not turning up, in disgust at Trump's words and policies.

Music fans have long combined their passion with political activism, but rarely on this scale or with this public an effect. How K-pop fans came to be a political force and how they capitalize on social media to take action is worth understanding.

In South Korea in the mid-1990s, K-pop emerged as export-oriented pop that combined the latest trends in African-American-inspired popular music and dance; an explicit reliance on the internet and social media to disseminate songs and videos; and the active cultivation of participatory fandom. Making inroads into China and Japan in the late 1990s, it had become a global sensation by the late 2010s. Indeed, its largest overseas fan base may now be in North America.

BTS, the most popular K-pop group, has been number one for over 180 straight weeks on the music trade journal Billboard's Social 50 that ranks the most popular musicians on social media. BTS fans, who call themselves Adorable Representative M.C. for Youth, or ARMY, number themselves in the millions.

From their preferred perch on Twitter -- one thing they share with the U.S. President -- they meander across the digital landscape and make their presence known on Instagram, Facebook, TikTok and other popular digital hangouts. In 2019, there were 6 billion tweets about K-pop.

But how does K-pop fandom go from cultivating cultlike devotion with commercial implications to becoming a political player? We should not look to K-pop producers or artists. They are no Taylor Swifts enjoining their followers to vote Democratic. The bands tend to be resolutely nonpolitical; they are out to please fans and make money, not to change the world. However, BTS in particular stress messages of personal empowerment and do not merely sing but also act to combat prejudice and violence.

Furthermore, K-pop fans, whether in South Korea or the U.S., are far from passive automatons. Intense online exchanges are not just about who has the most adorable hair style or what the best group is, but also encompass social, cultural and political topics. It is about deeds too: fans have been making gifts to charity and nonprofit organizations for years. K-pop fans learn dance moves at KCON USA in Los Angeles in August 2018: they are far from passive automatons.   © Reuters

One consequence of a multicultural upbringing is Gen Z's widespread, almost reflexive, anti-racist sentiments. Some K-pop fans, in addition, are sensitive to the debt that K-pop owes to African-American music in particular and the general ethos of woke culture: a consensus on the evils of racism, sexism and homophobia.

The shocking video of George Floyd's painful death sprang some of ARMY and other K-pop fans, particularly in the U.S., into action. They spammed #WhiteLivesMatter, a racist reaction to #BlackLivesMatter, and Trump's online birthday card. BTS ARMY raised $1 million for Black Lives Matter groups.

The majority of BTS or K-pop fans are not political activists, but given the large fan base even a small minority can make a huge impact. And one thing K-pop fans -- most of them digital natives -- know how to do is to elevate their favorite groups' likes and followers, generate trends and make things go viral.

Their repeated successes have empowered them. For most fans, it is not much of an effort to click a few times to support a good cause and enjoy the positive recognition for K-pop and K-pop fandom.

Neither ARMY nor K-pop fandom will become a permanent force in American politics. But what they represent are youth culture and social media, which are not going away.

Almost exactly a year ago, Trump visited South Korea, and President Moon Jae-in welcomed him and his entourage with K-pop boy group Exo in tow. We don't know what Trump thought of Exo, but we know what Exo fans thought of Trump at the time. Their negative reaction should have alerted him to the potential peril of K-pop fandom.