A woman casts her vote during provincial elections in Prachuap Khiri Khan province in Thailand on Dec.  20: the public was more interested in education and justice reform and less concerned about the students' demands.   © Reuters
CopyCopied

Michael Vatikiotis is Asia director for the Centre for Human Dialogue. He is author of "Blood and Silk: Power and Conflict in Modern Southeast Asia."

When COVID-19 struck, there were dire projections of increased conflict and unrest across Southeast Asia based on the projected economic impact and social dislocation.

In fact, as 2020 draws to a close, the region's political landscape has proved relatively stable with low levels of violent conflict despite the widespread disruption and unhappiness.

Tens of thousands of Thai students have marched in protest in Bangkok since September, but the government led by Prime Minister Prayut Chan-ocha survived and violent incidents were limited. Malaysia's Prime Minister Muhyuddin Yassin managed to hang on despite a wafer-thin parliamentary majority and little popular support. In Singapore, Myanmar, and Indonesia elections passed peacefully, mostly returning incumbents, with little evidence of discontent despite months of staggering economic decline.

Conflict has subsided for the most part in areas where insurgents battle governments. A unilateral cease-fire declared by the main armed group in southern Thailand that lasted from April to July brought unprecedented calm to the Malay-majority region. Even in Myanmar's Rakhine State, where clashes between the Arakan Army and Myanmar Army have killed hundreds of combatants and civilians this year, an informal cease-fire has been in effect since mid-November, allowing seventy thousand displaced people to return to their villages.

There are exceptions: the Philippine army has ramped up efforts to extinguish the Communist New People's Army and stamp out Islamic militants in the Sulu islands. The targeted killing of elected officials and journalists has continued.

The relative calm cannot be explained by the absence of social and economic stress. The pandemic has massively impacted regional economies, with loss of income hitting people very hard as meager savings have evaporated and families that had managed to escape poverty over the last decade now going hungry.

In Myanmar a recent survey showed that poverty has spiked since July from 16 % to 60% in some areas, while in Kuala Lumpur's poor areas one in three young adults are unemployed and have given up seeking work, according to a United Nations October survey.

Slow and insufficient economic support has not dented public support for governments across the region either. Even in Thailand, where anti-government tensions have been high these past three months, there is little evidence that Thais around the country are flocking to join the protests centered mostly in the capital. In provincial elections held this month a political movement strongly supported by the student protest movement failed to win any seats. One recent opinion poll suggested that the public was more interested in education and justice reform, and less concerned about the students' demands.

With most people entrusting their health and security to governments during the pandemic, in some cases opposing government efforts to open up the economy, this forbearance has, in turn, generated a higher than normal tolerance for governments across the region.

Still, it is also true that governments have used the pandemic to impose tougher restrictions on social gatherings that have hindered mass movements from mobilizing protests. When a firebrand Islamic cleric returned from exile in Saudi Arabia to Jakarta last month, tens of thousands of people flocked to the airport to greet him. The government was furious and have since cracked down on Muhammad Rizieq Shihab, better known in Indonesia as Habib Rizieq, and his followers. 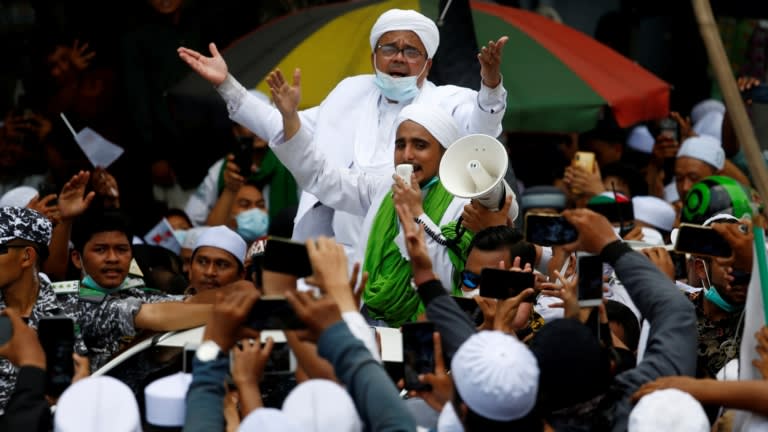 Habib Rizieq is greeted by supporters at the Tanah Abang, Jakarta, on Nov. 10.   © Reuters

Overall, it would seem that the pandemic has had a dampening impact on civil society and popular activism in all respects. Not only do restrictions on movement make it hard to mobilize, but public fears about the health situation make it less likely that people will join crowded protests. This situation also makes it hard for armed groups to rally support for their campaigns of violence.

Shortly after the Nov. 8 elections in Myanmar, the Arakan Army, which has battelled the Myanmar military across Rakhine State all year, agreed to meet their opponents and suggested that elections be held in those constituencies where they had been canceled for security reasons. The resulting undeclared cease-fire has brought much-needed respite to the state, where almost 200,000 people have been displaced amid a spike in COVID cases.

The problem is that opportunities for reducing violence fostered by the pandemic are hard to sustain and develop because of the challenge of convening face-to-face meetings while the pandemic rages. Dialogue to end the long-running conflict in southern Thailand had been making considerable progress in the latter part of 2019 and early in 2020, with Malaysia facilitating formal talks. But these talks came to a shuddering halt after March.

Perhaps it is still too early to expect people hard hit by the pandemic to express their frustration and anger so long as everyone appears to be suffering. Southeast Asians have a tradition of resilience and an ability to absorb hardship. But judging from the history of unrest and political instability in the region over the past few decades, social injustice and economic marginalization will not be indefinitely tolerated.

Once a COVID vaccine becomes available and economic recovery gets underway, people will be watching to see who benefits first. If ruling elites are first in line to be protected and to benefit from the recovery, that is when we can expect public anger to erupt.