How COVID-19 undid Duterte's poser government in the Philippines

Incompetent president has proved out of his depth at every turn At every turn, Duterte has been proven to be out of his depth.   © Malacanang Presidential Photographers Division/AP
CopyCopied

Few Asian leaders are keener to consign this year to the history books than President Rodrigo Duterte of the Philippines. Yet posterity -- or even just 2021 -- might not be kind to Southeast Asia's weakest economic link amid the COVID-19 era.

Epidemiologists can quibble with who had the region's worst coronavirus response. Indonesia is surely in the running. What is not debatable is that Duterte's economy is suffering the deepest contraction -- 11.5% in the third quarter year-on-year. It is indisputable, too, that Duterte's fingerprints are all over this 2020 underperformance and the rocky year ahead.

Economies are like leaky roofs: it is best to repair them when the sun is out. And since June 2016, Duterte has had ample opportunities to patch holes in the macroeconomy and cracks in the micro one below. He chose instead to wage a bloody war against the drug trade and a rhetorical one with, well, just about everyone.

Duterte quarreled with the U.S., Canada and the European Union. He brawled with China and flirted with it, too. He called the United Nations, the International Criminal Court and Pope Francis things we will not repeat here. He tussled with the legislature, the judiciary and hinted at assassinating journalists. He directed his ire at rape victims, Holocaust survivors, Arabs, you name it.

When, though, will Duterte take on the foes he was elected to confront? Inefficiency remains rampant. Corruption is booming. Inequality festering. The addiction to overseas cash remittances remains a bigger threat than fentanyl or OxyContin. Manila's traffic still squanders billions of dollars of gross domestic product. Voters turned to Duterte to repeat on a national scale his successes in the southern city of Davao, where he served as mayor for 22 years. Yet at every turn, Duterte has been proven to be out of his depth.

The lack of economic retooling, for example, is damaging the revitalized nation that his predecessor Benigno Aquino bequeathed him four-plus years ago. During six years in the presidential palace, Aquino strengthened the national balance sheet, increased transparency and attacked graft to win Manila its first-ever investment-grade credit ratings.

Sadly, Duterte pivoted away from internationalizing the economy toward pet issues. Every nation in Southeast Asia faces a drug challenge; only Duterte's got consumed by it.

Manila's COVID lockdowns are a microcosm of the problem. Duterte's government is plenty heavy-handed with the lockdowns approaching the 10-month mark. It has been far less competent with testing, contact-tracing and strategies to balance health risks with a reopening the economy. 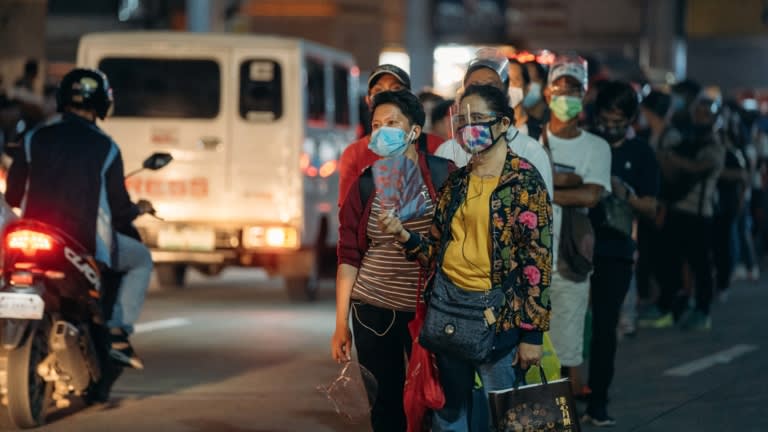 Commuters queue to board a bus in Quiapo, Metro Manila, on Oct. 1: Manila's lockdowns are a microcosm of the problem.   © NurPhoto/Getty Images

Consumer confidence is stumbling toward 2021 at a record low, a clear and present danger considering household spending represents more than 70% of GDP. Remittances from overseas Filipinos are drying up too as construction sites, hotel lobbies and cruise ships around the globe go idle.

All this would have any government ramping up stimulus in a huge way. Manila's latitude is limited thanks to Duterte's pivot away from fiscal probity. The risk of credit downgrades is tying the strongman's hands. As such, "trends in government spending point to a downward trajectory for growth," notes Nicolas Mapa of Dutch bank ING.

This put the onus on the central bank to break the fall. Bangko Sentral ng Pilipinas is taking extraordinary actions including, Mapa says, "quantitative easing and de facto debt monetization." In other words, BSP Governor Benjamin Diokno is scrambling to make up for the limitations of Dutertenomics. Yet Duterte deserves considerable blame for where the Philippines finds itself as the pandemic intensifies. The lost momentum from the Aquino era to now is a self-inflicted wound.

Had Duterte made good on his populist rhetoric, business insolvencies might not be surging today. Wages might have swelled, leaving household balance sheets in a better state. Safety nets might be better prepared to address nearly 9% unemployment. Foreign relationships might be less frayed, opening the way to economic cooperation and trade.

Even the Catholic-majority nation's beloved holiday season looks like a wash. Duterte is not exactly the Grinch who stole Christmas. But just like U.S. President Donald Trump, posterity will not be kind to his botched COVID policies.

In fact, the pandemic has betrayed Duterte's take-charge government as a poser one. For all his tough talk of economic revolution, Duterte mostly rested on Aquino's laurels. The 6%-7% growth early in his tenure was Aquino-era inertia. That might have been fine if he used all that sunshine to reduce corruption and opacity, alter the tax system to catalyze startups and slowed the flow of young Philippine talent abroad.

If Duterte quit tomorrow, his legacy will be more about a disregard for the rule of law, damaging Manila's human rights and a poor response to the pandemic that Vietnam and Bangladesh are handling much more competently. Nor will history be kind to the backsliding on Transparency International's corruption index. Between 2018 and 2019 alone, Manila's grade plunged 14 notches to 113th, trailing Zambia and Albania.

Glad as Duterte is to see 2020 end, the year ahead could be far worse for his 108 million people. Anyone in Duterte's inner circle mulling a Christmas gift for the president might consider a mirror.