How Japan's Suga can build an alliance to counter China

The strengths and weaknesses of the Quad 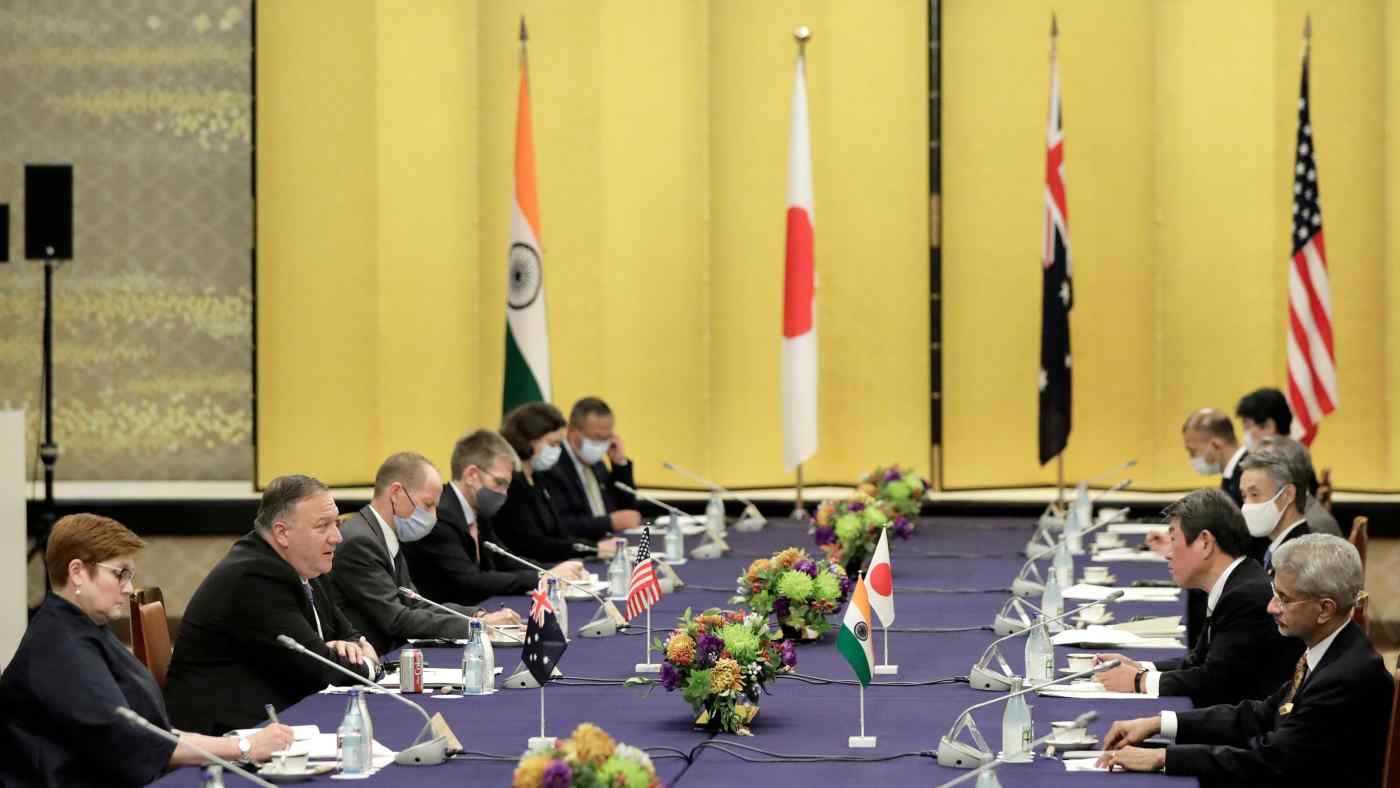 The Quad ministerial meeting in Tokyo on Oct. 6: becoming an alliance with reciprocal obligations is much further down the line.   © Reuters
CopyCopied

Kiyoteru Tsutsui is Henri H. and Tomoye Takahashi professor and senior fellow in Japanese Studies at Shorenstein Asia-Pacific Research Center and professor of sociology, all at Stanford University.

If his recent diplomatic contacts are any indication, Prime Minister Yoshihide Suga is off to an auspicious start in managing Japan's two most important relationships: the U.S. and China.

Last month, Suga got a pleasant surprise when he spoke to Joe Biden, with the President-elect explicitly stating that the Senkaku Islands, which China claims as the Diaoyu, fall under the protection of Article 5 of the U.S.-Japan Security Treaty. A few weeks later, Suga received China's foreign minister Wang Yi, who was there largely to consolidate the warm economic relationships between the two countries -- except for a prickly comment about the Senkakus at the end. Clearly, the U.S. and China both see Japan as a critically important player in their competition for Asia-Pacific hegemony.

This is a far cry from the precarious position Japan found itself in at the beginning of Shinzo Abe's first and second terms. In 2007, the young Prime Minister Abe elevated a spontaneous joint response by the U.S., Japan, Australia, and India to the 2004 Indian Ocean tsunami into a quadrilateral working-level group involving regular meetings and maritime exercises. Dubbed the Quad, Abe sought to make the group a counter to China's increasingly expansionist threats in the Indo-Pacific region.

When Abe's first term was cut short, he was succeeded by the more China-friendly Yasuo Fukuda, who prioritized relations with China and stepped back from the Quad. Combined with a leadership change in Australia that saw the pro-China Kevin Rudd become Prime Minister, the Quad fizzled out.

After Abe returned to the prime ministership in 2012, lingering suspicion over his hawkish nationalism and anti-China sentiment was exacerbated by his 2013 visit to the controversial Yasukuni Shrine. That provoked rebuke not only from Japan's East Asian neighbors but from then U.S. Vice President Biden.

With U.S. policymakers still hoping that China's surging middle-class wealth would transform the country into a peace-loving democracy, the Quad seemed like a misguided attempt by Japan's China-hawks best left forgotten. Some in Tokyo were even starting to worry about a "grand bargain" between the U.S. and China that would relegate Japan to a small supporting role in the Asia-Pacific.

How times have changed. Few in Washington believe China will ever metamorphose into a moderate democracy, while in 2017, Abe harnessed Donald Trump's anti-China agenda to revive the Quad, as all four countries realized the need for a viable strategy to contain China. The new Quad has quickly gathered momentum, with India allowing Australia to join the Malabar naval exercises in November for the first time in 13 years so that all Quad members could participate.

As the Quad's main architect, Abe played a central role in bringing the group to this point, pairing it with the Free and Open Indo-Pacific vision, another influential framework for the region for which he can claim authorship. By Abe's side throughout these developments, and now in charge of Japan's foreign policy, how will Suga handle the Quad, and what are its pros and cons?

The highest aspiration for the Quad is that it becomes an Asian version of NATO that can contain China. The combined military capabilities of the four countries are formidable, with the U.S. obviously leading the way and India possibly needing some catching up. The geostrategic impact of a formal alliance to pressure China would be tremendous.

Such an alliance would be even more effective if it included other countries in the region. Some, such as South Korea, New Zealand, the Philippines, Indonesia, and Vietnam, have begun to participate in multilateral forums headlined by the Quad, possibly foreshadowing the development of a Quad Plus grouping that could exert significant pressure on China to moderate its expansionist approaches.

While Suga will likely tread carefully in expanding the Quad's activities to avoid damaging important economic relations with China, he has a clear understanding that China will only respond to power, and the game-changing power of the Quad alliance would surely appeal to him.

For all its potential, the Quad is not there yet. Fundamentally, it remains a coalition of like-minded countries discussing their concerns about China. At their most recent meeting in Tokyo in October, the four countries could not even muster a joint statement -- instead releasing separate readouts in each country's capital. Becoming an alliance with reciprocal obligations is clearly much further down the line.

Unless greater institutionalization becomes reality, China's divide and conquer approach will remain a threat, as it will try to target one or another country to break the Quad. China has already successfully done so before, pushing Australia to break from the Quad in 2008.

Today, the Quad's greatest utility for Suga is the threat it poses to China. The potential for this loose coalition to coalesce into a formidable alliance would increase if China continues to engage in provocative actions and further alienate the four countries. This threat could be effective in deterring China's aggressive behavior in the Indo-Pacific.

At this point, Suga will likely use the Quad as a card, gradually deepening its engagements but also preparing to develop it into a stronger alliance if China keeps poking at the Senkakus. The fact that Suga has that leverage today speaks to Japan's improved position relative to the early days of the first Abe administration.