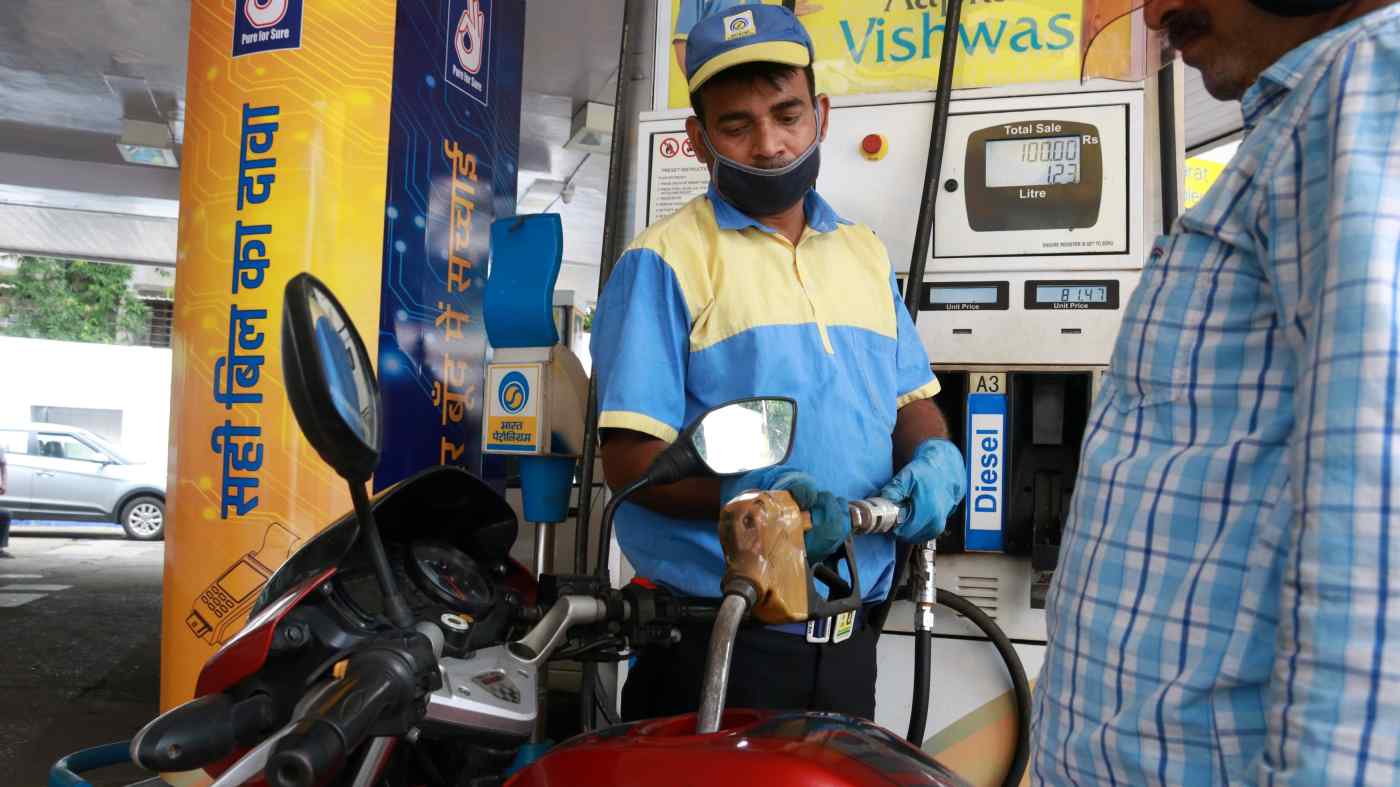 A petrol station in Kolkata, pictured in June 2020: Indian media whip up fears that pump prices would reach an unprecedented 100 rupees a liter.   © NurPhoto/Getty Images
CopyCopied

In a departure from New Delhi's usual behind-the-scenes diplomacy with its major crude suppliers, Indian Oil Minister Dharmendra Pradhan publicly remonstrated recently with the Organization of the Petroleum Exporting Countries for "creating confusion" for buying countries.

Pradhan's comments, first made during a panel discussion at a conference hosted by the Atlantic Council on Jan. 19, were a thinly veiled reference to Saudi Arabia's decision days earlier to voluntarily slash an extra 1 million barrels from its daily production through February and March.

Saudi Arabia was not represented on Pradhan's panel, but OPEC secretary-general Mohammad Barkindo responded with the somewhat platitudinous reassurance that the producers' group would keep the interests of consumer countries in mind.

Pradhan doubled down on his complaint in a speech at a South Asia commodities forum hosted by S&P Global Platts on Feb. 4. "Efforts at artificially distorting prices will have a dampening effect on the fragile global economic recovery that is underway," Pradhan warned.

Saudi Arabia's unilateral cut, announced at a meeting of OPEC and non-OPEC energy ministers on Jan. 5, not only jolted world oil markets, but came as a surprise to the other 22 producer alliance peers, deepening total OPEC Plus production cuts from 7.2 million barrels a day in January, to 8.2 million for February and March.

Saudi Energy Minister Abdulaziz bin Salman said the cuts were necessary to accelerate global oil market rebalancing, especially in light of the precarious recovery in demand through the fourth quarter of 2020. From a producer's perspective, the argument was sound, in light of the fresh pandemic waves sweeping across Europe and the U.S. since the start of winter, prompting tighter restrictions on economic activity.

By voluntarily curbing production nearly 11%, and saving its allies the pain of making deeper cuts, the Saudi "sacrifice" earned it the gratitude of peers and cemented its position as OPEC's de facto leader. It also averted friction within the group, whose cohesion has been threatened in recent months by opposing views over how much to tighten the oil supply reins and what prices to aim for.

Pradhan's quarrel is not with the OPEC and non-OPEC alliance implementing big cuts last year to mop up the surplus oil that was sloshing around as sweeping COVID lockdowns brought the world economy to a virtual halt last April. Rather, he was taking issue with OPEC Plus moving the goal posts without warning, and sending oil prices spiking when consumers were least expecting it -- especially when emerging market economies were depending on benign fuel prices to aid their post-COVID economic recovery. India's Oil Minister Dharmendra Pradhan, pictured in June 2015: he was taking issue with OPEC Plus moving the goal posts without warning.   © Reuters

Though Pradhan was speaking for India, the world's third-largest crude importer that buys 85% of its oil needs in overseas markets, his words are bound to resonate with the region's other consuming countries.

Saudi Arabia's decision sent benchmark Brent crude prices surging from $51 on the first trading day of January to an 11-month high above $56 by the second week of the month, and had combined with renewed optimism over oil demand recovery to catapult them above $60 by Feb. 8. With New Delhi facing public anger over petrol prices, Indian media outlets have seized on the topic, whipping up fears that pump prices would reach an unprecedented 100 rupees ($1.37) a liter. To be sure, New Delhi's increases in fuel taxes have contributed to soaring prices, and one could argue that Pradhan needed to deflect the heat. But his public sparring with OPEC is better understood from his somewhat euphemistically worded charge of policy "contradiction." In other words, Pradhan was expressing his annoyance at being caught off guard by the latest spike in crude prices.

The OPEC and non-OPEC alliance had decided in early December to raise output by 500,000 barrels a day from January, and then to continue gradually releasing more oil into the market each month thereafter. As a result, consensus expectations were for prices to remain around $50 a barrel for Brent, or to even ease a bit through the first quarter. Instead, barely two months down the line, consumers are staring at $60 a barrel.

It is not a small difference. For a country importing around 4.5 million barrels of crude per day, India is looking at an additional outflow of $45 million daily. That adds up to a $1.35 billion spike in India's monthly import bill, not to mention a bigger drain on its foreign reserves.

The Atlantic Council dialogue also raised an interesting ideological tussle between stability and predictability when it comes to oil prices, which should be like two sides of the same coin.

Barkindo, in his remarks, stressed OPEC's desire to maintain stability in the oil market. He was alluding to last April's unprecedented cratering of oil prices and the fear of another dive if demand took a hit before the northern hemisphere winter is out. Pradhan was arguing for consumers' need for predictability when it comes to prices, at least as far as understanding and anticipating OPEC's moves are concerned.

While Saudi Arabia basks in the warm glow of a sacrifice that has begun delivering returns in spades, it may want to heed Pradhan's words. If consumers understand and support OPEC's actions to put a floor under oil prices even during a global economic crisis, it is only fair that they expect not to be blindsided by the group's maneuvers.